South African businesses are taking digitisation seriously. The nation’s digital revolution is gathering pace thanks to its diverse economy and impressive mobile infrastructure and as a result, the country has emerged as the most digitally mature country on the continent, according to a report by Siemens.

Technological innovation is a strong engine of growth, but it’s not just changing the nation’s economic and business landscape — it is also helping to promote an e-democracy.

Channelling experience from both the private and public sector, and educational qualifications from amongst others Columbia University, Fort Hare and Witwatersrand Universities, Unathi Mtya, CIO of the Parliament of the Republic of South Africa, understands the inherent value technology can add to both business and the democratic process alike.

“As explained in the Inter-Parliamentary Union framework for a democratic Parliament, Parliament should be representative, transparent, accessible, accountable, and most importantly, effective,” she explains. “As CIO, I lead the ICT division in Parliament and this aims to use technology and digital tools to contribute towards a digital democracy. We use technology to promote a responsible people's parliament and to improve the quality of life of South Africans.”

The rapid growth of South Africa’s tech industry was clearly evidenced at this year’s Africomm, the largest tech-focused event in the continent. Although a record-breaking number of visitors, exhibitions and speakers may have come and gone, the event highlights the lasting impact tech is set to play in South Africa’s future.

Giving a keynote address at the event, Mtya outlined a clear blueprint for creating a winning ICT strategy. Citing the need to add value for customers, to start with the end in mind, and to truly understand customers’ needs, Mtya discussed how an ICT strategy can be developed and implemented in both public and private sector.

A driver of change

“Gone are the days where ICT is just a supporter,” Mtya observes. “ICT acts both as a driver and an enabler nowadays. I'm quite passionate about how technology can add value to business. It justifies how a company should continue to invest in ICT in support of its major business objectives.”

Digitisation at the Parliament of the Republic of South Africa is, by all measures, a team effort. With an understanding of the latest technological trends, continuous investment and innovation, digitisation has played an important role in parliament for some time.

“No matter what industry you're in, disruption has always been there,” she says. “Economies are changing, industries are changing and it's because they've been disrupted. In parliament, there are several digital initiatives that are really improving the way parliament operates. This is how we're contributing to our digital democracy.”

Implementing a state-of-the-art app called My Parliament, Mtya and her team are helping members to be more effective in their oversight work. This will contribute towards the public’s understanding of how the South African Parliament is serving them whilst also making operations smoother and efficient for members of parliament.

“Our objective was to design, develop and implement, a member-centric application that's capable of presenting relevant, accurate and timely information to members of parliament in their mobile devices,” comments Mtya.

The ICT division initiatives, in particular the rolling out of My Parliament App, has the honour of being supported by the ICT Focus Group, chaired by House Chairperson of National Assembly Honourable Cedric T. Frolick.

The ICT Focus Group is a joint forum of designated National Assembly (NA) and National Council of Provinces (NCOP) Members of Parliament who reflect political party spread, race, gender and national demographics. It continuously strives to influence and support the effective use of ICT in Parliament and promotes initiatives towards improving public participation and public engagement.

Like any organisation, the parliament has core business divisions such as a finance division, a HR division, and more support divisions. By automating and modernising these processes, digitisation is helping make parliament’s workflow more responsive, capable, and accessible anytime, anywhere.

“In other words, instead of them having to deal with tonnes of material, they can securely access information with just a touch of a button on their devices,” Mtya adds. “It leverages different technology platforms to enhance the way the member performs their day-to-day duties. Through this ease of access, we're trying to improve efficiency and it's helping us to be more responsive as parliament of the people and to improve the quality of life of South Africans.”

On top of this, parliament is also using digitisation to encourage continuous improvement, more integration, and sharing of knowledge. In an environment which generates an abundance of paper when creating laws, bills and legislation, digitisation is helping to make the parliamentary process more efficient.

The ICT division also has a unique Broadcast & Audio Visual Technical support unit responsible for broadcasting parliamentary sittings and committee meetings. In doing so, it helps to fulfil the strategic objective of creating an institution that is responsive to the needs of the people of South Africa through public participation and involvement.

Currently parliament is ready to produce up to 16 live televised feeds to the mainstream broadcasters and with the television equipment installed it is 95% broadcast on the digital terrestrial television (DTT) platform.

Digitisation is making an affirmative change at the Parliament of the Republic of South Africa and this is subsequently catalysing change for the country at large. Digital disruption is shaking up traditional business models in South Africa and in doing so it is creating opportunities for tech entrepreneurs and startups across the country.

“Parliament needs to be digital and interactive,” explains Mtya. “Therefore, the use of technology – whether that’s making sure that there are effective tools for members and staff of parliament, or that mobile applications are enriched with user-friendly parliamentary information, or improving recording and production, for instance – is helping us contribute to our digital and interactive parliament.”

“I think it goes without saying that digitalisation is also creating new opportunities for the country and continues to do so, especially for startups and tech entrepreneurs,” she adds.

“It's been a game-changer. It’s helping people launch new startups anytime, anywhere. It also provides opportunities for people to solve their own problems that they understand best rather than waiting for a company somewhere else in the world to solve it. Digitisation is affecting every industry. It’s giving companies a competitive edge. If an organisation doesn’t appreciate the power of technology and digitalisation, they will be left behind.”

Identified as the second largest economy on the continent, South Africa has firmly cemented itself as a leader in the tech space. But with rapid technological growth, what challenges are facing the sector in the country?

“One thing I think is key is increasing access,” reflects Mtya. “In a society like South Africa, the more access that is in young people's hands the better, because then they are able to participate in the economy, they are able to start their own organisations, they are able to create startups. Increasing access and also lowering cost of data is something that I think could bring about a positive digital economy and promote tech literacy.”

On the path to digitisation, the South African parliament isn’t alone. Parliaments across the globe are beginning to understand the inherent value of digitisation for the democratic process. To promote innovation, Mtya accompanied a multi-party delegation which forms part of the ICT Focus Group as they travelled to Denmark, to learn more about the country’s technological innovation, including that of the Danish Parliament (Folketing). She is keen to collaborate with other parliamentary IT teams.

“Like any other industry, I think it’s important for us to see what we can learn from different governments and what they can learn from us,” she says. “Because you face similar challenges, you can learn how the others have solved some of these challenges. Sometimes you're embarking on similar initiatives and you're able to share knowledge. Done responsibility, it brings about lots of benefits.”

With a successful digital transformation underway, it seems the Parliament of the Republic South Africa is on its way to helping the government and country become a leader in the tech space.

Looking forward, the ICT division is exploring how robotics automation, artificial intelligence and machine learning can help it gain a competitive edge and improve its capability. By leveraging such technologies, Mtya and her team are exploring ways that will strengthen the workforce and its delivery helping to bring the parliament’s vision for the future to life.

“In five years’ time I'd like to see how digitisation can help us offer a much more mature way of improving oversight and accountability in parliament,” Mtya says.

“I hope to see a much more aggressive level of openness, transparency, accessibility, and most importantly public participation. It’s about making sure that parliament becomes interactive and digital thereby relevant to the public.” 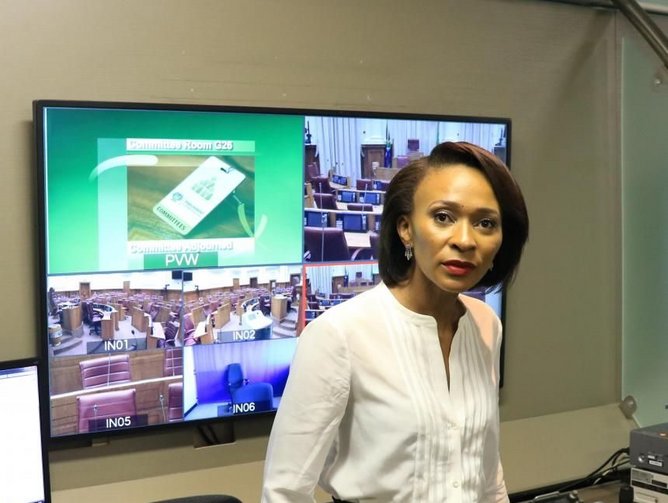