In 2019, KLM Royal Dutch Airlines will reach a hugely significant milestone in its aviation journey.

Already boasting a stature that comes with being the oldest airline in the world still operating under its original name, on 7 October next year KLM will celebrate its 100th birthday.

Over the course of close to a century, it has always been a trailblazer. In 1929, it operated the longest-distance scheduled service and in 1934, it was running transatlantic flights. In 1989, it introduced the most advanced Boeing 747 of its time and by the turn of the millennium, it had picked up major awards for a host of groundbreaking initiatives. As its 100-year landmark approaches, KLM is once again adapting to take on the industry’s biggest challenge: the onset of digital.

The realities of the current era of digital transformation will result in even the most established airlines hitting turbulence. Ever since Pieter Elbers took over the company’s reins in 2014, however, KLM has been certain of its mission – to create a forward-thinking, resilient and efficient business fit for the technological age.

“It is very important to them and they feel that we are accomplished in that area,” says Liesbeth Oudkerk, Project Officer for Digital Transformation. “If you look at the work we are doing, it is achieving more and more. They have seen that we can make the change to digital.”

Oudkerk and Wim Vollenberg, Program Management Officer for Digital Transformation, are speaking directly from KLM’s ‘Digital Studio’, housed at the airline’s Amsterdam Airport Schiphol East base. Opened in 2016, the studio was born out of KLM’s desire to maintain its culture of innovation and is an important function of its digital transformation.

Currently with room for nearly 200 workers but with ambitious expansion plans in the pipeline, the ‘Digital Studio’ is a creative space where employees from every area of the business are encouraged to foster ideas on how digital can transform day-to-day operations. With firm eyes on the future, Oudkerk and Vollenberg have led the studio’s work on developing solutions that embrace disruptive technologies such as blockchain, artificial intelligence and augmented reality.

“It's certainly been more successful than even I thought it would be,” explains Oudkerk. “It started off really simply; we didn't have enough space for our digital team and so I said ‘okay, let’s find a new space and then we can start working’. We wanted to involve people and we wanted to develop that space with them.

“It’s really taken off and given a lot of people a few different vibes, as it’s a place where they can work on their future. At the moment I’m building a plan with the main points of attention for the next year, and to innovate in the ‘Digital Studio’ is one of the core themes.”

In order to tackle the familiar challenge of implementing change at a company that employs nearly 32,000 people across a wide range of specialisms, KLM has adopted the agile way of working and the scrum framework to rapidly grow its ‘Digital Studio’ project.

The ‘Scrum Studio’, from which the ‘Digital Studio’ took its lead, is an environment designed by Scrum.org, led by CEO Dave West, to contain high-performing teams that exist either as physically separate organisations to the main business or as protected parts of that business, creating a cluster where individuals involved can fast-track empirically-based innovation without distractions.

“It's very difficult to change large legacy companies from the inside,” outlines Vollenberg. “Scrum.org came up with the ‘Scrum Studio’ concept which is that you start not within but more on the side of the large company. It tries to act as independently as possible – of course, you'll never be completely independent because you need salaries, you need IT, but you try to do that.

“That's why we changed our working title into ‘Digital Studio’. We are trying to make progress to be faster, quicker and more innovative but not completely independent from KLM, because we also try to influence the bigger KLM with the things that we’re working on.

“We work on a ‘digital transformation’ theme as an innovative studio. There are teams at KLM that work in digital in other areas like passenger operations, engineering and maintenance, cargo, HR and finance, so the ‘Digital Studio’ is not the only place where we work on digitisation for crew and employees, but the difference is we focus our work on new technology. As we put it, we try to work on the ‘day after tomorrow’.”

Even though most of the studio’s current projects remain at the experimental stage, the fast-paced nature of development encouraged by the digital transformation team has seen a handful of its innovations already morphed into practice.

One such example is the evolution of a virtual reality (VR) product initially put forward by an aircraft mechanic who held a personal interest in the technology. Stationed in KLM’s engineering and maintenance division, Chris Koomen joined the ‘Digital Studio’ and has helped with the integration of VR solutions on a far broader basis, including to transform the training for aircraft crew.

“People who are having catering training, for example, now don't have to go into an aircraft; they can stay in the VR lab,” says Oudkerk. “This is the perfect example for the ‘Digital Studio’; speaking to someone who had an idea and then facilitating them to further this skill, further their idea. I think that this is one of the models of our company. Our CEO wants to work with our people and make products for them, together with them. And he Koomen was a mechanic starting out too, so we're happy with that.

“Another example is that we were experimenting with and have now implemented a chat-bot for our social media in the commercial part of KLM and we are now trying to experiment with that technology in other areas of the business, from employees to HR.

“We are working with experiments on blockchain in our engineering and maintenance department too, and we are looking at augmented reality for the maintenance of aircrafts and engines, an idea that was also generated by a mechanic. In fact, two of our iOS Developers were aircraft mechanics as well in the past.”

Powering KLM’s strides into the technology age is its overarching priority to put the individual’s needs first, whether that be a customer or one of its workers. Renowned for its first-class customer service and stellar employer reputation, one of its defined objectives is to become the ‘most customer-centric, innovative and cost efficient European network carrier’.

The core objective for the ‘Digital Studio’ looking ahead is to see its influence continue to permeate KLM’s mighty operation through its role in the digital transformation.

Every four weeks, it hosts a demo to show interested observers the very latest technology developments being worked on and guest speakers are arranged to deliver talks to staff about the transforming digital world. Communicating its efforts internally and externally is also a vital tool, not only to attract new talent but to showcase KLM’s digitisation to the market.

“We are an aviation pioneer and a pioneer nowadays is pioneering technology,” concludes Oudkerk. “20 years ago, it was about pioneering with different things, but now it’s about that. It’s a really dynamic market now and will be for a long time. The thing with more and more local carriers coming in is we really have to innovate and make breakthroughs.

“We consider ourselves to be pioneers and we really want to be a technology pioneer too.” 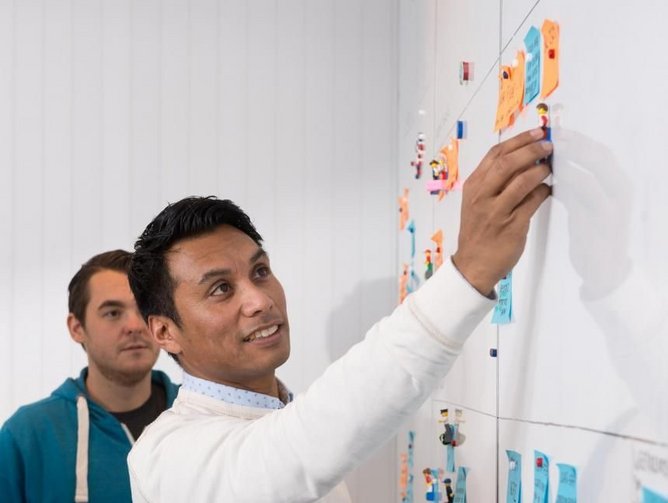 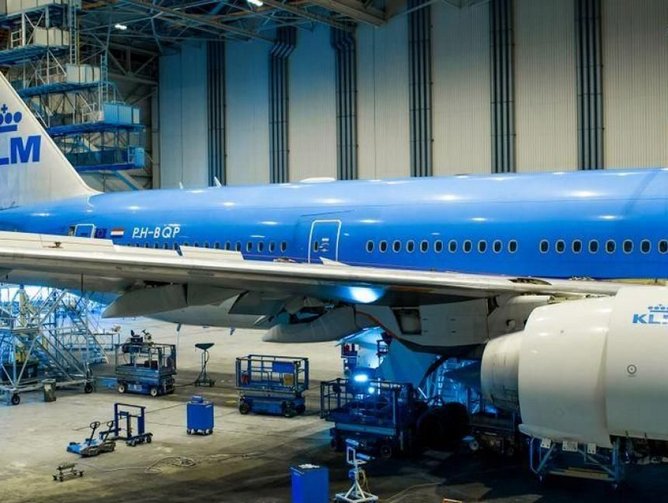 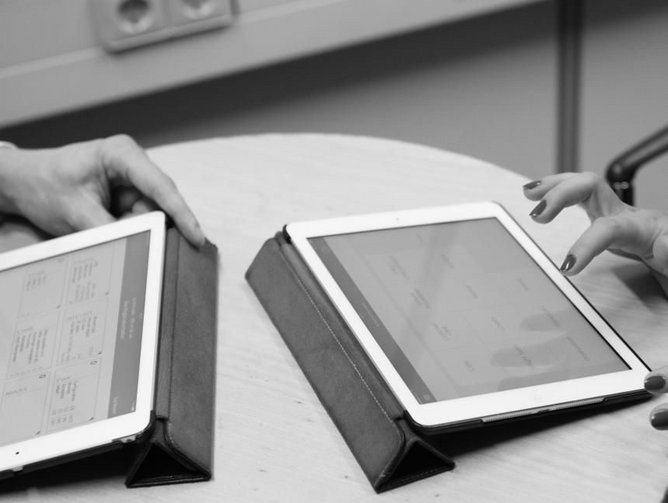 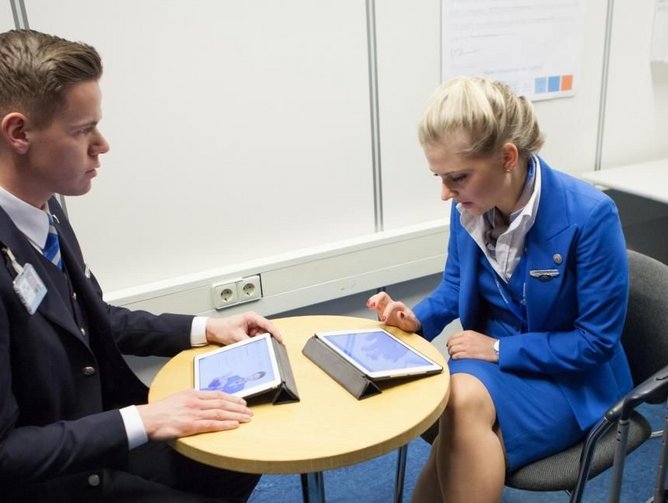