Gastronomy Foods: Spearheading the franchise industry by giving back to local communities

For over 70 years, Kentucky Fried Chicken, now popularised as KFC, has captured the hearts (and appetites) of its customers. Turning the restaurant industry on its head upon launching in the UK in the 1960s, the brand has become the second-largest restaurant chain worldwide, developing services and products which are quick, high quality, and most importantly, so delicious that customers come back for more.

Increasingly busy lifestyles have led to the exponential growth of the food and beverage industry, where it has amassed $90.173mn in revenue in 2018. KFC franchisee Gastronomy Foods has been part of the brand for over a decade, successfully enticing new and existing customers with mouth-watering products in alignment with local tastes and preferences, whilst housing a unique, people-focused culture.

Behind the franchise’s ongoing success, owner Akram Khan’s passion for the brand is clear to see. From working as a part-time cook at the age of 16, his emphasis on excellent products and exceptional hospitality, with a focus on speed, has seen the brand recently amass a turnover of £52mn. With 15 stores under his umbrella, seven which are drive-through outlets, the business has acquired a further 22 KFC drive-through outlets at £30mn. Now operating 37 KFC’s, Gastronomy Foods will aim to build three more by the end of 2018.

Primarily launching Gastronomy Food’s first KFC restaurant in Chingford, East London in 2002, Khan was always inspired to give back to local communities and enable his workers to succeed.

“The thing I liked about KFC was the providence. Fresh chicken, handmade, in store. These are the things that really appealed to me. My aspiration was always to be the overseer of 200 people, working in our business,” he says.

“I spent five years with that one particular store, starting off doing £6k a week in sales. We made the store one of the best in the country, and in a few years, we had doubled our weekly sales and had the highest year on year (YoY) growth of 12% over four years. My operating standards were also one of the highest in the UK and Ireland, and in 2004 and 2005, I was recognised by YUM! Brands as ‘Franchisee of the Year.’

However, in order to develop the brand further, Khan created a shortlist of the franchisees’ that were planning to retire or sell their stores, targeting all areas in the UK.

“One guy, based in the Midlands, North Wales wanted to sell. He had seven stores in Shropshire and Shrewsbury and had run the business for over 40 years. The stores all needed work but had great development potential,” he explains.

Acquiring the seven stores in 2006, on top of the existing restaurant in Chingford, Gastronomy Foods has slowly built up its portfolio, spanning Rhuddlan, Aberystwyth, Stoke-On-Trent, Holyhead, Shropshire and Shrewsbury. Working alongside property company LARS Investments, the business now supports over 1,500 staff members.

However, it has not all been plain sailing for Gastronomy Foods. The credit crunch in 2007 occurred as the company was in the middle of building its store in Aberystwyth and relocating two other stores.

“I had been promised bank funding of close to £1mn, but the bank pulled the plug on the loan a week before I needed it,” explains Khan.

“Nonetheless, I was determined to achieve my goals, so I borrowed as much as I could and managed to cover £600k and the rest through leasing equipment.”

Following a move to HSBC in 2011, the company has gone from strength to strength, where Khan now spends up to 40% of his time driving the brand forward, and the remaining time at Gastronomy Foods.

As customers continue to turn to food outlets which can deliver food that is quick, tasty and high quality, Gastronomy Foods has placed significant investment in introducing new digital tools to support its ongoing services.

“We’re putting kiosks into 90% of our stores and are spending a lot of time with people like Google, Facebook and Amazon to see what technologies to factor in and see how we can get our products to customers in the most convenient way,” Khan says.

“This year, we will do 13 refurbishments, costing approximately £3mn. Getting our assets right is key, where we refurbish our stores every five years. Bladon & Kirkham look after all our new store openings and refurbishments and are fantastic.”

Additionally, the company has added eight new Starbucks, fully diversifying its portfolio and embracing brands that evolve with its customers’ busy lifestyles.

“I looked at Starbucks versus Costa and went with Starbucks as I didn't like the Costa brand and the provenance of their coffee,” explains Khan.

“I like Starbucks’ principles and where their coffee comes from. With every cup of coffee, a percentage goes directly back to farmers. So, again, the same kind of giving principle, providence, authenticity, Starbucks had that people-focused approach.”

“We have worked with NIS over the past four years and they do both our KFC’s and Starbucks signage. They’re great guys to work with and nothing is too much trouble.”

A Trustee for the “KFC Foundation” charity, which donates around £2mn a year to worthy causes in the UK like Children’s hospices etc., Khan strives to take people on a personal and professional journey.

“I took an Area Manager on, who had previously worked for the company as an operational auditor, and I made him a shareholder as long as he helped to deliver our goals. That gentleman now owns 20% of a £50mn business which is still growing,” he says.

Gastronomy Foods has also become home to cooks which have worked their way to become shareholders, partners, managing directors and in Khan’s position – franchise owner. Internal, organic growth is clearly at the core of the business, where the majority of managers have been with the company for close to a decade.

Placing heavy emphasis on the welfare of its staff, Khan remains keen to visit stores to gain essential feedback regarding new, fresh ideas to bring to fruition.

“Some of our best ideas come from our staff in store, where the managers bring them forward. We get a lot of feedback from our people on the ground because they know what's going on and know how to get things done,” notes Khan.

“KFC is situated in over 130 countries worldwide, so we also look at what's worked well in different markets and share best practices and products to see what suits our market.

“Our zinger double down is soon being launched. You have the double down, which is two pieces of fried chicken, double cheese, bacon, sauce and no bun. It’s really popular,” he continues.

“Last year, people were saying, ‘we want the zinger version of it’, which is amazing.”

Renowned across the food and beverage industry worldwide, KFC is often in the limelight. Although the recent furore surrounding the brand’s change of UK delivery contractor from Bidvest to DHL led to what has been described as ‘The KFC Chicken Crisis,’ Khan states optimistically that it has bought a number of positives to the business.

“I think a lot of people still don't realise that we sell fresh chicken. This really came through in the advertising and comments across social media. We are continuing to dispel some of those myths around the use of processed food,” he says.

KFC have also launched open kitchens across the UK, enabling customers to grab tickets and join the house kitchen, have a go at cooking at various outlets and see how the brand operates.

“As part of the advertising board, we take 5% of our net sales and put it towards all kinds of advertising: TV and digital, as well as social media. Any new product development also comes through this board, what we should and shouldn’t be launching. This can range from anything to do with the supply chain, operational issues, etc.,” he adds.

“It's not about the bottom line. My lifestyle doesn't change, whether I have 10 stores or 300 stores. My proudest achievement is how many people we look after,” notes Khan.

“If you look at North and mid-Wales and the number of people that we employ, some places were really struggling,” he continues.

“When we first opened Holyhead KFC down in Anglesey, 80% of our staff were long-term unemployed as there were no jobs. When people shake your hand and say, ‘thank you so much for this opportunity, I haven't been able to find a job for the last three years’, that's such a lovely feeling.”

As Gastronomy Foods continues to expand, Khan will remain steadfast in providing the best quality services, products and results. Currently resting at 37 stores, Khan aims to reach £120mn turnover, with over 60 stores under his belt.

“I want to try and do this with the same family values. I've seen companies get big and people don't know who anyone is, that's the bit I don't like,” he adds.

“I want to be the best at what I do, and I don't care whether that's mopping the floor or running a company. I don't believe in mediocrity. I want to be hero or zero, make me the villain or make me the hero, nothing in between.” 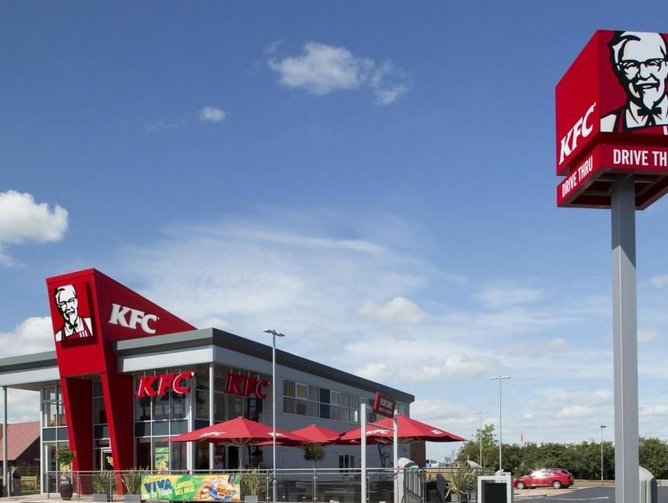