GBI: Connectivity on a global scale

Established as the carrier of choice for telecoms operators, internet service providers (ISPs) and governments throughout the Middle East, Europe and Asia, Gulf Bridge International (GBI) is responsible for the development of a connectivity network like no other. The first subsea cable to offer 100G, the company provides a system capacity of up to 10 terabits per second in some areas of its network to support SMEs and enterprises on a global scale.

Remaining one of the most technologically advanced networks in the world, GBI continually looks to develop its services and cater towards this increasing demand for connectivity. Developed with financial support from the Gulf sovereign state-owned fund, the cable network spans almost 42,000km, crossing 26 countries. The extensive loop system connects all the countries in the Gulf, then spans eastward towards India, and westward towards Europe. However, GBI’s ability to remain agile throughout its exponential growth has been key to its continuing success.

“We realise that we're not an incumbent operator but the market has changed. We have always believed that agility is one of the most important factors in the telecommunication industry,” explains Chief Executive Officer Amr Eid.

Strenuously working to connect enterprises both inside and outside of the Gulf, almost 25% of the internet in the region is now routed through GBI either directly or indirectly. Its submarine and terrestrial network houses a complete range of International Private Leased Circuit capabilities (IPLC), which connects businesses securely, transmitting data through the use of fibre optics.

Additionally, it houses ethernet over SDH competencies (EoSDH), allowing traffic to travel over SDH networks. This is supported by the use of Dense Wavelength Division Multiplexing (DWDM) technology, where strands of fibre are able to carry a number of optical signals. This has enabled data to travel in many different directions within the network. Such technologies have therefore enabled GBI to increase its capacity and flexibility.

Its commitment to its customers and subsequent technological investment has led GBI to become the sole neutral carrier in the Gulf, and the sole provider of a direct network when connecting users all the way from Europe to India, at a bandwidth and capacity fit for customer needs.

“Whether people like it or accept it, we have influenced the way that telecommunication services are being exchanged in our part of the world,” Eid expresses confidently.

From its IP services, managed hosting services and extensive capacity services, GBI has worked to fully disrupt the Middle East telecommunications industry, placing it ahead of the competition. Developing strong links with stakeholders, customers, suppliers and its partners has seen the business develop solutions which will bring long-term value both to the Gulf region and its global customer base.

“We believe that most of the innovations and advancements in technology happen because of people who are driven, people who are willing to challenge their own talents and own taboos,” Eid says. “I think in light of the roadster Tesla car revolving around the earth, that same person worked on PayPal years ago. Everybody thought he was crazy, but it ended up with a Tesla revolving around earth, didn't it? So, we are driven.”

Catering to both enterprises and leisure users, GBI’s Internet Protocol (IP) services encompass a premium broadband solution, sold specifically to enterprises to ensure minimal service disruption, in addition to high download and upload speeds through a low average hop count. This has consequently given GBI an edge over other Tier 1 providers in the Gulf region.

Its managed services further provide a comprehensive solution by enabling businesses to fully connect on a global scale at reduced costs, with connections to the largest IP exchanges within Europe, alongside regional internet exchanges in the GCC.

By introducing what GBI has coined ‘liquid connectivity,’ Eid explains that this is a new concept which has been offered to both customers and government users to support its competitive pricing strategy.

“You can buy capacity on the network, and users can transfer this from one point to the other based on their needs,” he says. “Our software-defined services and micro-verse services across the network are now being used by enterprises. With a click of a mouse, users are now able to actually change the direction of the traffic, ultimately providing flexibility.”

However, acknowledging that crossing a large number of countries can present a number of regulatory challenges, GBI’s cloud optimisation has allowed the business to enhance its connectivity capabilities within its end-to-end service operations. It has also led the company to further explore ways to increase its bandwidth and Multiplexed Transport Layer Security (MTLS), covering security, confidentiality of data, alongside data distribution (with some low latency routes within its loop system), and various other complex security barriers within its network.

To counteract any security concerns, GBI has developed its software-defined network (SDN), enabling the company to become an IP provider, which has ramped up its security and control, particularly surrounding the upstream of connectivity across each specific region. This is further supported by GBI’s Optical Transport Carrier solution, which houses several layers built to serve the needs of its customers.

However, with an aim to ensure its cables and latency usage remain utilised at 100%, the company has faced a number of challenges, as a number of countries house low-latency routes, such as Iraq. To counteract this, the company has worked to eliminate the latency within these specific lines, which in turn has strengthened its relationships with cloud providers, where enterprise users can now bypass directly to the cloud.

By strengthening its security backbone, GBI’s T3 certified data centre hosting within its UAE and Qatar carrier hubs has seen it provide premium IP transit and managed connectivity services. Eid compares GBI’s services to that of the shipping industry, where it is distributing connectivity and enabling future scalability:

“We are now able to implement the software-defined boxes at the customer site, which enables the customer to always have unlimited connectivity. This is also why we've been chosen by cloud providers to become their direct connect partner,” he says.

“I view what we're doing as a shipping business. The only difference between us and Maersk, or any of the other shipping container freighters, is that they ship your belongings in metal containers. We ship it in digital packets,” he notes.

“That's the only difference. You look for speed, the protection and privacy of your contents, and you look for accurate delivery of the product without any loss. We have the same thing.”

The rise of streaming services has also sought to influence GBI’s service offering. For example, its cloud capabilities have seen it deliver exceptional gaming services by placing a specific layer within its network for this target audience.

The use of weekly, in-depth analytics will further enable GBI to increase the value of its services, as well as gain greater awareness of the trends within its connectivity usage. Whilst one day it could be Netflix, the next day it could be Instagram – all its findings will allow the company to look at new ways to support and drive customer demand.

Additionally, with a long-term aim to further grow its social network visibility, the use of analytics will also allow GBI to capture the pulse of the market and assess its market share, something it has never looked at in previous years.

The emergence of a global sharing economy will continue to further impact GBI’s operations, where its customers want value for money but at lowered costs. This, of course, has not only ramped up competition, but has also led to a shift in consumer consumption and the use of technology within the telecommunications industry.

“Today, nobody buys their own server, they are now rented. If consumers aren’t using it, they can put it back to the cloud or bring it back. Customers are moving away from private lines, towards Network Trust Link Services (NTLS) and the public internet,” observes Eid.

“However, the issue with the public internet is the mixed issue between privacy and local regulations. The government operators will provide you with the internet with a contention meter. It's a non-committal internet.”

Although GBI houses social network caching and technological advances within its internet systems, it might face a number of uphill battles with competitors. “We are David in a Goliath industry. I’m sure all of us know the challenges that David faced,” he adds wistfully.

“I always ask the question, ‘in our world today, what’s a license? What’s a border?’ We all have cloud services; most of us don't actually know where the physical photos of our families are located. So, part of the challenge we face is change. How can we convince incumbents to change or to adapt to new services?”

Despite this, GBI continues to see exponential growth of up to 50% per year, operating in an industry which is growing at up to 10%, reflects Eid. With increased pressures and demands for its services, the company will continue to remain humble, smart, trustworthy, and guarantee increasing value of its services, keeping in mind that the region could need a similar cable in future if the demand for connectivity continues to grow.

With a long-term goal to earn the title of best network, as well as the best submarine network in the region, GBI will also continue to develop its cloud services, in order to support small contract-based applications and cloud-based applications.

“You will hear very soon that we are merging with more data centres worldwide in order to provide true software-defined networking. We hope that we are going to win prizes as a software design network provider or as a cloud enabler very soon,” concludes Eid.

“At the end of 2018, we’re looking at merger and acquisition activity to grow our business. We are touching the quarter of billion-dollar mark. Being supported by our shareholders, restructuring our debt will also allow us to go even further to increase future capital in GBI and develop future services.” 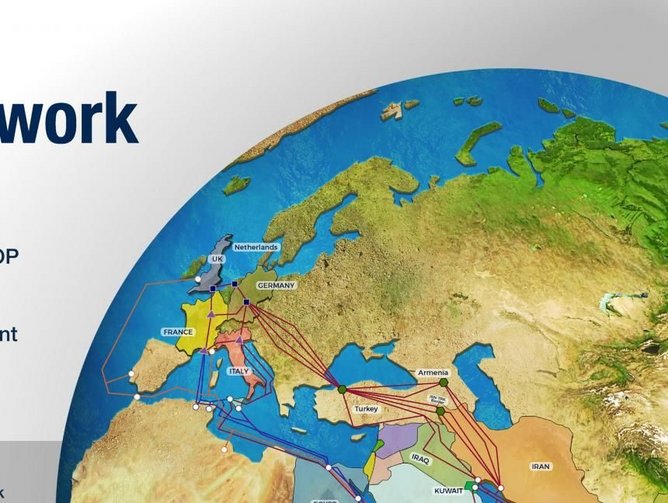 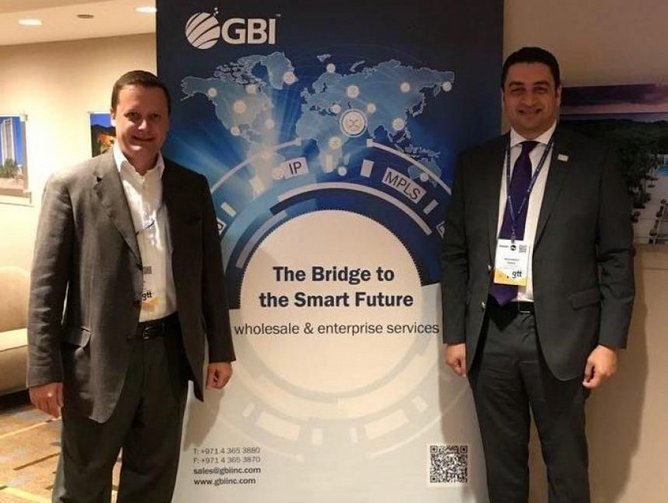 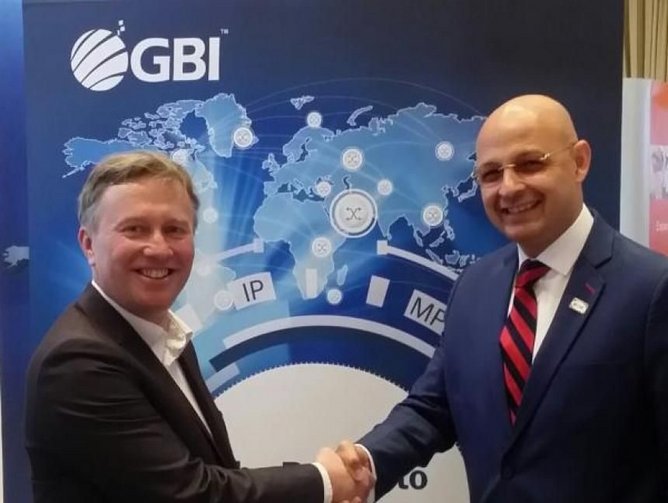