Think data analytics is new? Think again. GfK has been a global leader in data and analytics for more than 85 years, conducting its first studies in 1934 – long before computers, the internet, and Super Mario Kart (more on that later).

The German company continues to innovate and serves some of the world’s leading brands as a trusted partner by providing world-class analytics that promise to not only deliver descriptive data but also actionable recommendations.

However, even with such insight, it would have been near impossible for GfK to predict the COVID-19 pandemic and its swift and severe implications. Companies had to act fast, accelerating their digital transformations. GfK was no exception, but perhaps better prepared than most.

Joerg Hesselink is Global Head of IT Infrastructure and has end-to-end responsibilities for the company's network and related services – including data centres, servers, backup storage databases, and cloud infrastructure services.

“I've been in this industry now for 29 years, and I have to say that during the pandemic was the toughest, but also the most rewarding year,” says Hesselink.

“When you look at IT infrastructure, it is typically a backend job. Consumers of your service don't realise what you're doing unless something gets broken. But this time, everybody from the CEO down counted on you and your teams with the highest expectation to simply stay connected and stay in business.”

GfK has operations in Asia Pacific so realised early on how serious COVID-19 was going to be. Almost overnight, Hesselink and his team assembled a global task force.

“We made further investments in mobilising our workforce, replacing desktops with laptops,” he recalls. “We stress-tested our network entry points into the company. We proactively monitored any critical infrastructure. We adopted our support model from heavy onsite to anywhere anytime. And within six weeks we introduced Microsoft Teams for enhanced communication and collaboration.”

“IT teams became the company superheroes of 2020. Nobody thought we could send more than 8,000 employees home and still be in business.”

GfK’s digital transformation started in 2017 when the IT group realised the need to update the company's infrastructure and applications.

GfK’s leaders at the time were looking for a solution that could provide flexibility and scalability and the IT group knew that cloud services would play a vital role in the company's future.

GfK already used some cloud services to supplement its on-premises, data centre environment, but high costs became a challenge. Therefore, the IT group decided to capitalise on multiple clouds while controlling costs and managing complexity. Hesselink says they are now “in the last mile” to becoming a truly hybrid, multi-cloud infrastructure-as-a-service (IaaS) provider for GfK.

“Personally, I believe the hybrid model with more flexible working options for employees is the way to go,” he says. “We should follow the good examples from the tech industry who have been practicing this for some time. Now, I think companies will have to relook at their real estate strategy and office occupancy rates, have a mobile-first mindset when equipping their workforce, and this will ultimately help to attract and retain top talents. On the flip side, I do believe information security will become even more important. Security at the edge and zero-trust technologies needs to be seriously considered.”

One of GfK’s value propositions is it to be an independent and trusted partner of the industry. That is one of the reasons why having a hybrid cloud-based IaaS (rather than focusing on a single vendor or a single technology) approach empowers GfK to respond to new and future projects with astonishing agility and speed.

“Resources can be shifted quickly and easily from private to the public clouds without modifying the nature of the interaction within the environment,” says Hesselink.

“The process to truly move to a hybrid multi-cloud environment is very experimental. I would say that first you need to upskill your workforce because either they come with an infrastructure engineering background with little to no cloud skills and capabilities or they are natively born in the cloud. So, you have to unlearn to relearn new techniques to get into this hybrid world – into this hybrid model.”

“Cloud is a very dynamic industry, so you need to constantly adapt. It's really about go fast, fail fast, learn fast, and then come back stronger. It is not straightforward, it's experimental and it requires a special skill set from your workforce.”

When it comes to cloud partners, GfK works with many and continues to adapt whenever the need arises. This is due to the value proposition of the company, which is to be independent and to be trusted. That said, they do have a long history working with VMware.

“VMware is a strategic technology partner for IT services to offer consistent operations and management across on-premises and cloud-hosted environments. We are currently adopting a hybrid cloud model implementing VMware cloud foundation by extending our data centre into the cloud and integrating our on-premises infrastructure,” says Hesselink. “We do that today with VMware Cloud on Amazon AWS also so-called BMC. And very soon we will also explore VMware on Google GCP.”

GfK claims that it is revolutionising real-time access to critical knowledge. How exactly do they do that, and what are the benefits? Well, it’s about markets, providing data analytics and recommendations at clients’ fingertips – anytime, anywhere.

A good example of that is GfK’s latest product, called gfknewron – an AI engine providing actionable insights and recommendations to some of the world’s biggest brands. That’s some achievement for a product built on native public cloud technologies that only officially went to market in 2020. So why is that proving successful?

“I would say, especially during COVID-19, we found that the market needs to react quickly, faster than before. We have seen a huge shift from brick-and-mortar business into online business. So, it is instrumental to get the data when you need it, in order to take action to not lose market share – and that is the promise of gfknewron.”

Getting through the pandemic

Every company has had to adjust, pivot and accelerate digital transformation in order to survive the COVID-19 pandemic. Those that did it best, and those that innovate, are the companies more likely to emerge the strongest. So how does Hesselink rate GfK’s efforts and their current position as we emerge from the worst?

“I would say overall, we are managing the situation very well, and this is thanks to the trust of our customers and shareholders,” says Hesselink. “Our company's vision and priorities have not really changed. Social interaction has clearly changed and while we are embracing our collaboration tools and have a video always-on mindset in the business, we are missing time together in person.”

Keeping up morale, wellbeing and mental health has become a number-one priority for many firms during lockdown, and GfK has also been keen to support remote socialising. The company is currently running a ‘health competition’ between departments, recording physical activity each day. It also introduced gaming – with players competing in Super Mario Kart.

Hesselink is the first to admit that he required “a week of training” from his children to achieve mid-table respectability in the fun contest, but he feels more confident driving his company forward as it reaches the last mile of its digital transformation.

“I think the company is very well positioned for the future, with a great senior leadership team, fantastic customer base and strong support from our shareholders,” he says.

“I think what's paying off is our innovative approach. I definitely think that in the next 12 to 18 months, we will have realised our true hybrid multi-cloud offering to a point that we can work closer with the developers and be part of the DevSecOps cycle.” 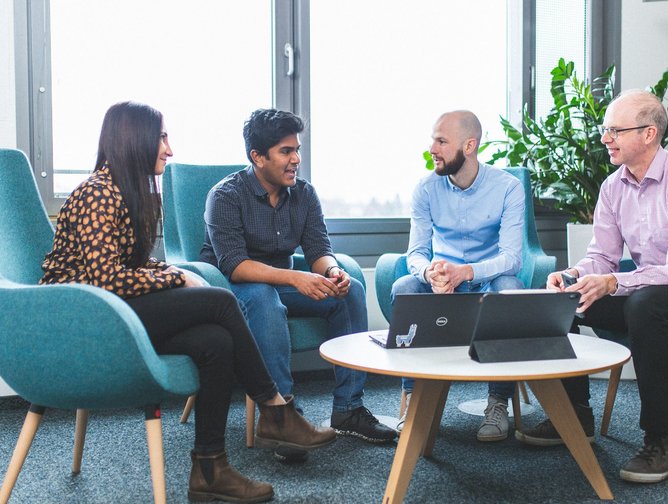