One year after the UK first locked down, COVID-19 has accelerated procurement transformation. Non-essential retail has re-opened—but according to British multinational Marks & Spencer (M&S), the most important shift has been in mindset. “[Before the pandemic], we had tried to change the hearts and minds of the team”, said Andrew Newnham, Director of Group Procurement at Marks & Spencer. “[But it was difficult] to make our people think differently about the role of procurement.”

If nothing else, the pandemic forced even successful retailers to think outside the box.  At one point in 2020, M&S’s clothing and home sales dropped to 15% of what they had been prior to the pandemic. “At one point just before the first lockdown point, our CEO, Steve Rowe, came through the office and said, ‘Go home now’,” Newnham said. “The pandemic was a kickstart to an entirely new way of working.”

Throughout 2020, Marks & Spencer gathered information about the strength of its data and processes, its agility, and its supplier knowledge. “We were empowered to make decisions”, Newnham said. He recalled telling his team that they’d look back on the moment as an exciting time: “We made a real difference to the business.”

A year later, M&S emerged from the pandemic stronger than ever. Certain procurement practices, however, have shifted—especially those revolving around risk management. “It doesn’t mean you can’t have risks,'' Newnham said. “You should have risks. But companies also need knowledge, transparency, and understanding.”

When Newnham joined M&S, risk mitigation was one of the pillars he implemented in his new procurement strategy. When the pandemic hit, risk suddenly took centre stage. “Marks & Spencer talked about decision-making”, he said. “Suddenly, we were at the forefront of asking: ‘What’s the risk in our supply chain?’”

When Marks & Spencer initially shut down, the company had tried to review contracts and, in line with many retailers, mitigate supplier costs. But Newnham and his team members discovered that they didn’t have clear immediate data to know which contracts could end easily and which couldn’t. This led to more revelations. “Before COVID, we’d talked about supply chain risks, but not necessarily operational risk”, Newnham said. “Certain suppliers could shut down a store. So what plan did we have in place to ensure that didn’t happen?”

To mitigate future operational risks, M&S Procurement spent significant time putting a new risk framework in place. Yet, the company decided not to spend large sums of money to buy pre-made solutions. “If you do that, the team doesn’t own the problem”, Newnham told us. “We made a conscious decision to use tools that [our team members] could use… that had accessible information and data. They needed to have a stake in the solution.”

One of the biggest motivators for Procurement at Marks & Spencer, after all, is the direct link between what they accomplish and the success of the company. “M&S is a great place to work if you want to work somewhere where you can deliver, make changes, and be empowered”, Newnham said. “This team understood what we were trying to do. One of the major achievements [of 2020] was with hearts and minds—getting the team to believe we needed to change.”

Throughout its decades of supply chain and procurement operations, Marks & Spencer has focused on building an inclusive, tightly-knit culture. As a result, when the UK lockdown started, many third-party suppliers stepped up to help M&S through its most difficult months. Said Newnham: “They were part of the solution.”

From here on out, the company intends to find not just tier-one partners but the right partners. “Sometimes the tier-two vendors are more flexible”, Newnham said. “It’s important that our suppliers share our values and are prepared to buy into our values.” How important is this cultural fit at Marks & Spencer? “Almost a defining thing”, Newnham said. “We’re a brand with a lot of heritage and a lot of legacy. Culture—and how we look after our people—is important.”

But successful partnerships take two to tango—and Marks & Spencer is determined to hold up its end of the bargain. Moving forward, the company aims to strengthen its supplier relationships by lending its expertise. “This isn’t just the right thing to do”, Newnham said. “We’re going to try to change things.” He pointed out that now, ESG supply chain measures affect how consumers buy and shop. “Our customers are diverse”, he said. “Our customers want sustainability. As a procurement team, it’s up to us to understand those concerns and help our third-party providers understand and deliver our values.”

While Marks & Spencer has historically focused on RFPs (requests for proposals) to close good deals, Newnham argued that the company should also be commercial advisors. “We’ll start with what we’re trying to achieve”, Newnham said. “Then we’ll work back from that. [We can decide] whether an RFP is the right route to take, or whether we take a more direct approach with a key partner.”

First, the company covers the basics. “You’ve got to understand the business objectives; you’ve got to handle the sourcing process”, Newnham said. “If you don’t negotiate a good deal, run a good competitive process, and reduce risk by getting the right contract in place with a good indemnity clause, you’re not really in procurement.”

Certainly, Marks & Spencer is excellent at focusing on key business outcomes. While the company has a distinguished history, it doesn’t shy away from keeping up with the times. “If you’re not involved in the commercial discussions all the way through the lifetime of the contract”, Newnham said, “how can you be expected to understand the service and do a great deal going forward?”

Still, to Newnham, procurement excellence is all about strategy. “Once we’ve got the data, how do we make different decisions?” he asked. “How do we look at our supplier resilience and either help them to change the way they operate or switch to alternative supply sources?”

All in all, Newnham believes the pandemic has made Marks & Spencer stronger. “Our procurement organisation is an unstoppable force”, he said. “You can’t let perfect be the enemy of the good. During COVID, the team had to drive operations forward. “Better to achieve our targets on time rather than reach an absolutely perfect bar”, he said. “We reach 80% perfect, and then we can ask: ‘How can we do things better?’”

As for the evolving role of procurement, Newnham is thrilled that his team’s recent work is helping Marks & Spencer adapt: “Nothing’s too small. You’d be surprised—deliver a lot of 1% changes and you make a real difference, it’s the British Cycling Marginal Gains rule.”

Going forward, the foundations of the company’s procurement strategy will be much more solid. After a transformative year, the company has stress-tested its systems, evaluated which ones work, and targeted those that it needs to improve. Newnham explained: “We learned what we were good at.”

In some sense of the word, COVID-19 helped Marks & Spencer change its perspective on what it meant to be in procurement. Currently, the company is re-envisioning its role in the global supply chain as well as its core strategies. “Now we’re about agility”, Newnham concluded. “We’re about making decisions. We’re about being empowered. We’re about effecting change.” 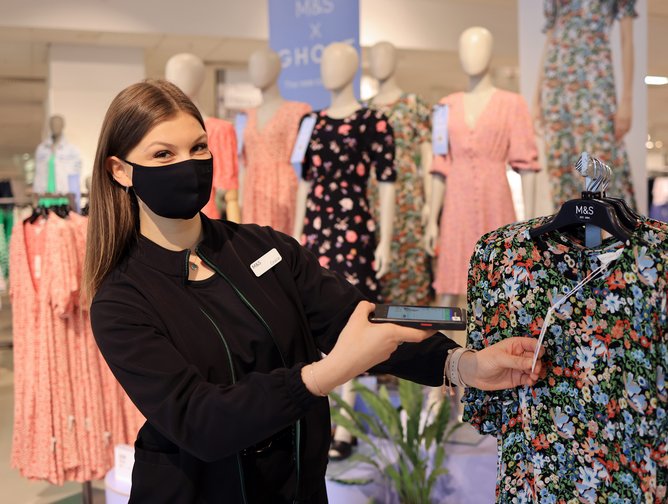