Mashreq Bank and the science of finance

Mashreq Bank, the market leader in banking innovations in the UAE, is celebrating its 50th Year in 2017, having begun operations as Bank of Oman in 1967.

Over the past five decades, Mashreq has been serving residents and businesses in several countries tirelessly, never ceasing in its pursuit to be the most relevant and technologically-advanced business it can be.

With a background in mechanical engineering as well as banking, Sandeep Chouhan, EVP – Group Head Operations and Technology, is best-placed to bring his wealth of expertise into Mashreq. He has been with the bank since early 2015, after holding CIO and COO roles for over 30 years with the likes of Morgan Stanley, Barclays Bank, and Citigroup. In his role, Sandeep leads the global transformation of Mashreq’s Operations and Technology across its international footprint.

Chouhan’s current responsibilities include the development of business transformation strategies – something of a strong suit for him, as it has become the backbone of his working life.

“My ability to transform businesses is the key differentiator I have based my career on,” Chouhan explains. “My latest role in Mashreq is to lead a digital transformation across its global footprint with a core focus on the Middle East region, a place that is experiencing not just accelerated growth, but hyper growth.”

According to Chouhan, technology-led transformations are the only truly sustainable type of transformation, but they still come with their own challenges.

Within a well-established bank like Mashreq, the transformation has to be not just the best, but also the most seamless, and that begins with asking a few vital questions.

“The challenge is twofold. First, is the technology truly industrial?” Chouhan ponders. “You have to catch it when it is on the upswing of the wave, and being able to determine the industrial nature of these technologies is the first step. Once you’ve established that, can it scale? Is it secure? Does it have longevity?

“Second, you must think about your choice of partners and resources. A lot of technological innovation takes place through third parties, so the partners are the ones making the innovations, and as an end-user bank you want to partner with the right company, the right products, the right geographic reach, and aligning views.”

This is clearly a structure which works for a company that is often regarded as the most innovative bank in the UAE. Established by entrepreneurs, the pioneering spirit of Mashreq’s founders remains vibrant, even as – after 50 years – the business prepares to transform again.

“The entrepreneurial spirit that represents Mashreq forms our core DNA,” says Chouhan. “For the next 50 years, we want to continue to be the leading light in this transformative new age of banking for the UAE, the GCC region and the world.”

Chouhan is building on a well-established and well-loved heritage, but he and the business are confident and comfortable doing so, as constant evolution is part of the environment which Mashreq has created for itself.

“It allows for this innovative spirit to blossom into something we cherish deeply, and we protect that hard,” Chouhan says. “Interestingly, anybody who comes to the region and is looking for an innovative partner gravitates towards Mashreq because they know we have this heritage, this hunger, this open-mindedness to take up a very disruptive and transformative business model.”

While the banking industry has historically adopted a very human approach to business i.e. with a heavy reliance on people to perform routine processes, Mashreq’s digital DNA does in fact drive every choice the business makes – even the creation of what Chouhan calls his ‘Digital Workforce’.

Even with his long technological background, Chouhan appears endlessly astonished by the speed at which all things digital change, and he chooses to embrace it. From the dot com and World Wide Web era, to the rapid evolution of mobile phones, to the ability to house terabytes of information in tiny containers, the last 20-30 years have enjoyed the quickest digital change in history.

Likewise, robotics has continued to advance. Specific to banking, the first robots ever introduced were ATMs. As technology and banking continued to collide throughout his career, Chouhan’s question was: where else could robotics be applied?

“We’ve seen the arrival of basic robotic tools performing repetitive tasks, to robots with natural language processing, to natural language generation, and cognitive capabilities,” says Chouhan. “Digital transformation is unavoidable. It’s happening because multiple technologies are rapidly evolving all the time. Mashreq is arguably the pioneer in the region to deploy robotic capabilities at multiple levels.”

“We believe the advancement we have seen in robotics capabilities from basic manual tasks to intelligent predictive tasks is happening because technology has bolted on pieces of different capabilities. The concept of a digital workforce emerged at Mashreq slowly, because as we began to roll out repetitive manual processes the robotic elements were running, we realised that like a human worker, the digital worker also needs supervision. It needs to be checked for accuracy, for productivity, it needs training and retraining – just like a human worker.

“With a digital worker you can skill-up with ease – a simple upgrade – but it’s still a worker. The concept of supervising these technologies was at the heart of us acknowledging the digital workforce.”

Of course, Mashreq maintains a human workforce who, free of more menial tasks, are available to customers to answer in-depth enquiries, but the main advantage of the digital worker is speed. This is what customers value most, according to Chouhan; wait time and task processing time are reduced, and so any misgivings they may have about leaving their finances in the hands of robots are left by the wayside.

Agility as a service

This ecosystem that Mashreq has developed runs on an agile methodology – a disciplined, collaborative business process that makes approaching high-end technology more manageable. This extends, too, to the partner ecosystem whereby Mashreq allows partners to co-innovate.

“The partners should feel that they are getting something in return, and upgrading themselves through our partnership,” says Chouhan. “Cyber security is also part of the ecosystem. The space, the depth, and the intensity at which transactions are getting digitised – and therefore the vulnerability involved – is increasing all the time, so you need to get the right cyber architecture in place at the foundational level of the journey.”

Tackling multi-dimensional threats is a constant battle for a business like Mashreq, but as a bank which boasts many firsts in the region – the first to introduce ATMs and credit cards, to take on AI and use its incredibly advanced tools – it is better positioned than anybody else to tackle whatever digital transformation may throw at it.

“Mashreq is a pioneer, and we have close to 40 processes run by robots performing 100,000 transactions a month, plus a robotic command centre to supervise the technology,” Chouhan states with pride. “We have many ambitious plans to grow across various areas, and revolutionise the customer experience. Half the battle is in making the customer happy, and the winner will be the institution who is able to solve the service experience game.

“The customer remains king in the game of service.” 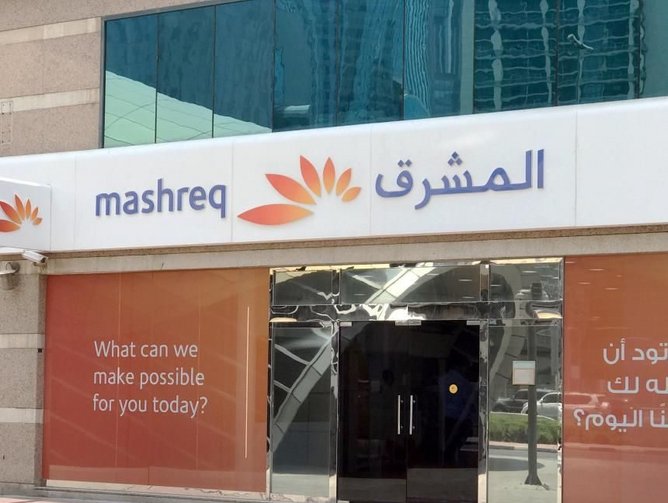 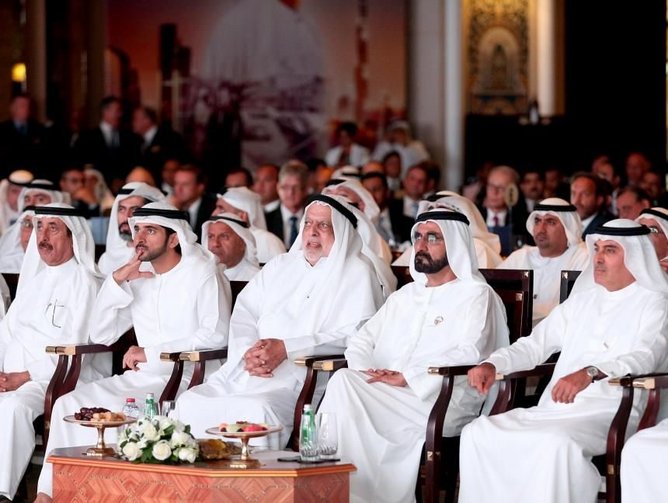 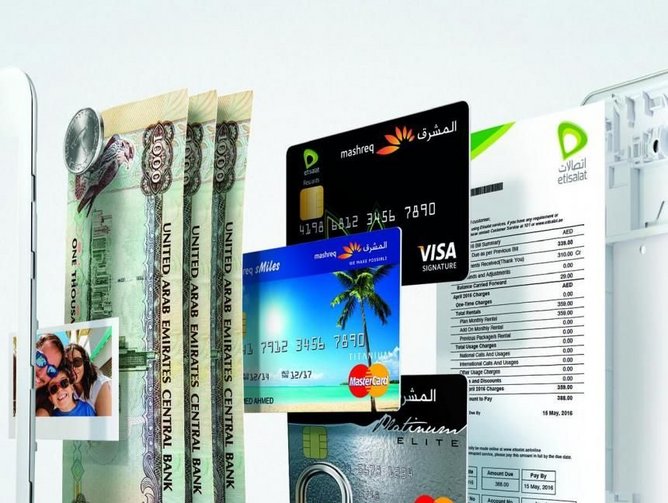 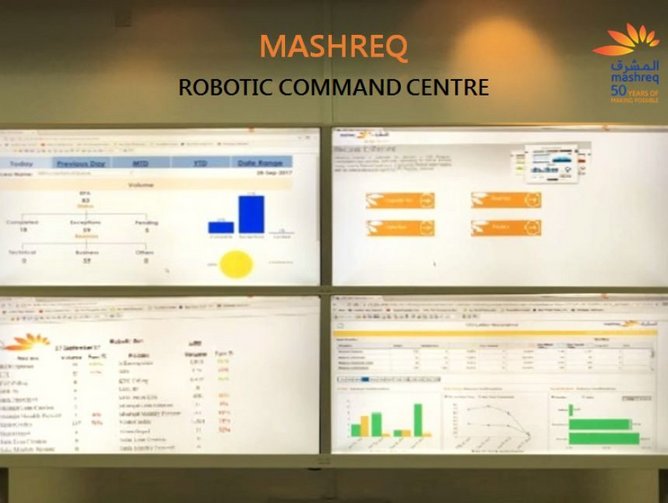 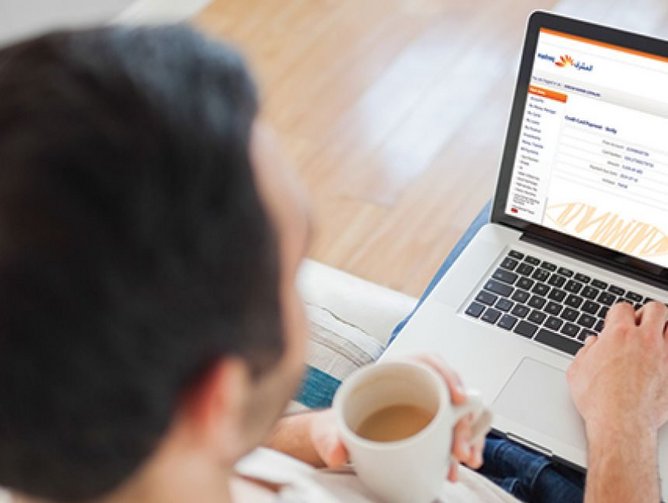