Day-to-day, Qatar Ports Management is responsible for managing the nation’s seaports and shipping terminals, but the integrated port and logistics services provider is also playing a more pivotal role. By substantially developing Hamad Port, the authority is not only strongly positioned to develop a regional shipping hub in the GCC, but also to play a major role in diversifying the Qatari economy ready for a post-hydrocarbon future. Business Review Middle East explores how the framework for this was developed and how, under the watch of CEO Captain Abdulla Al-Khanji, this vision for the future is being achieved.

Hamad Port and beyond

Alongside its oversight of the country’s quays, dry ports, and container terminals, Qatar Ports Management Company also provides navigation assistance and pilotage, towage, and Aids to Navigation (AtoNs) as well as loading, unloading, cargo handling, and storage. Furthermore, the company is also involved in developing seaports and related services in line with international standards.
Through its dual emphasis on continuous improvement across its shipping lines and by enhancing its focus on better meeting the needs of its customers, the provider is hoping to make Qatar’s the first port of call for companies operating in the region and beyond.

The business is responsible for two main commercial ports in Qatar, as well as the development of the new Hamad Port. The port also acts a long-term, physical manifestation of the Qatar National Vision 2030 – a project focusing on the social, economic, environmental and human development of the nation.

The $7.5 billion USD development does not merely offer expanded capacity in the form of three container terminals, but also brings a host of new, sector-specific capabilities. Alongside general cargo traffic, the port will be able to handle a variety of specialist imports including livestock, automobiles, and bulk grain. Alongside this offering, the port will also host a base for offshore and marine support vessels.

Hamad Port covers 26 square kilometres and will have the yearly capacity for 1.7 million tonnes of general freight and 1 million tonnes of grain, with a specialist terminal supporting the entry of around 500,000 vehicles per year.

Capt. Al-Khanji adds: “Hamad Port is so far the largest Port Project in the Middle East. It will open endless opportunities for domestic and foreign investment, especially in Um Al-Houl economic zone. Both the port and economic zone will form an industrial and logistics hub which will provide competitive advantage to industries and businesses through provision of highly efficient and cost effective logistics services.”

“Hamad Port is a crucial milestone in the transport strategy of the Ministry of Transport and Communications (MOTC) since it is the premier commercial maritime gateway of Qatar to the world. Hamad Port dovetails perfectly into the Qatar National Vision 2030. So too, developing the country into an import hub for the region will make Qatar more resilient against changes in the global economic environment.”

“Hamad Port will provide increased throughput with a capacity for 2 million containers per year, eventually increasing to over 6 million. This will then be supported by transhipment links by rail, sea and road to the region.”

The business is also working to encourage tourists to visit the country, and has partnered with the Qatar Tourism Authority in order to promote and facilitate cruise visits to Qatar. There are also plans for Doha Port to be redeveloped into a cruise and leisure yacht terminal facility, with its commercial operations moving to the new Hamad Port development.

Capt. Al-Khanji explains: “As part of the infrastructure preparations for the 2022 FIFA world cup, Mwani Qatar along with the Ministry of Transport & Communications is working with stakeholders to increase tourism through international cruise liners visits to Doha. The projection of a 15.9 percent increase in tourism revenue would eventually witness 3.7 million tourist arrivals by 2022.”

The Hamad Port will also being supported by an integrated logistics park that will connect the Qatar and GCC rail network, which will link incoming sea freight with the rest of the country and beyond. The port is also situated adjacent to Qatar’s Hamad International Airport, as well as civilian rail links; together these contribute to the port’s future as an international hub.

Hamad Port will be situated next to the Um Al-Houl economic zone which is equipped with the latest infrastructure and is served by a dedicated industrial canal, which adds a further logistical dimension to its operations. Backed up by road, rail, a canal and a nearby airport, the port is well-furnished for any cargo coming into or leaving the country.

“A good business environment, strong international framework and its ever-growing portfolio of customers and partners around the world are some key factors that contributed to the success of the nation,” says Capt. Al-Khanji, “This unprecedented growth also creates opportunities for the development of commercial and business prospects.

“Qatar has diversified its investment portfolio in the world as for many years the economy of the State has driven by the liquefied natural gas exports; Qatar has invested along the LNG value chain from upstream gas production, throughout the transportation system and ports, till distribution to the corresponding grid.

“The GCC region is growing at fast pace and so the level of infrastructure including ports. Studies show that the sea trade of GCC Countries with the rest of the world will grow rapidly during the next decade following the GDP growth in the region. At the same time, the port infrastructure suffers from lack of appropriate water depth to accommodate large vessels.”

There are but few ports in both the Middle East and GCC region that are equipped with adequate facilities to cope with large ships; in fact, the only hub-sized port in the region is approaching its maximum capacity. Not only does this evidence the fact that trade in the GCC region is booming, but also that the region is overdue a world-class shipping and logistics hub.

As the global oil price invariably fluctuates, the importance of economic diversification is becoming more pressing by the day. Home to the third largest oil and gas reserves in the world, Qatar faces a number of tough decisions ahead. Leveraging its strategic geographic position and economic clout, the Gulf State is increasingly prepared for an economic future not subject to the oil market. 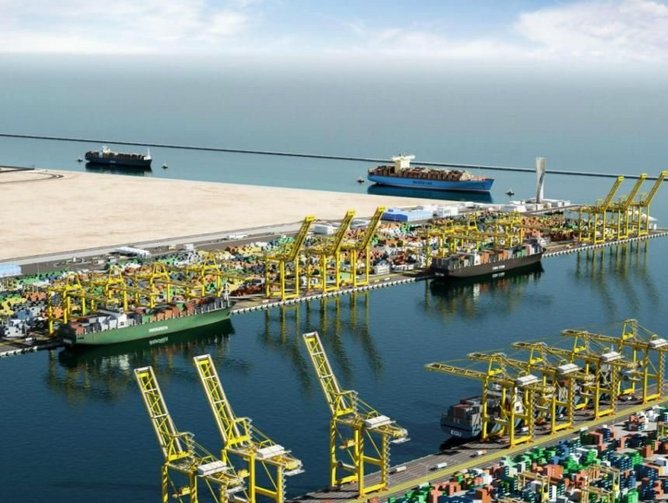 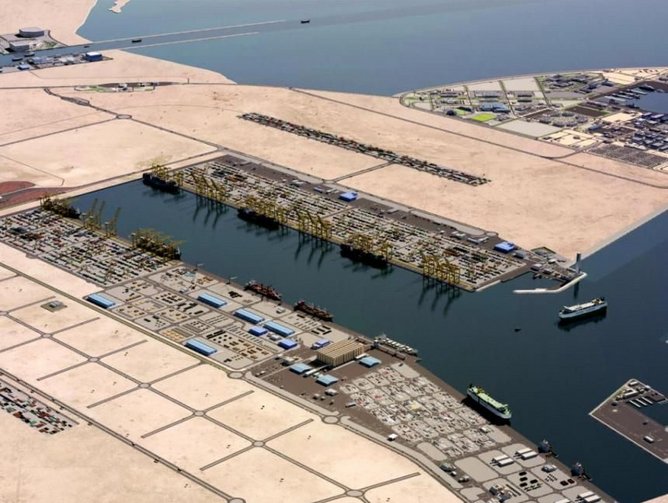 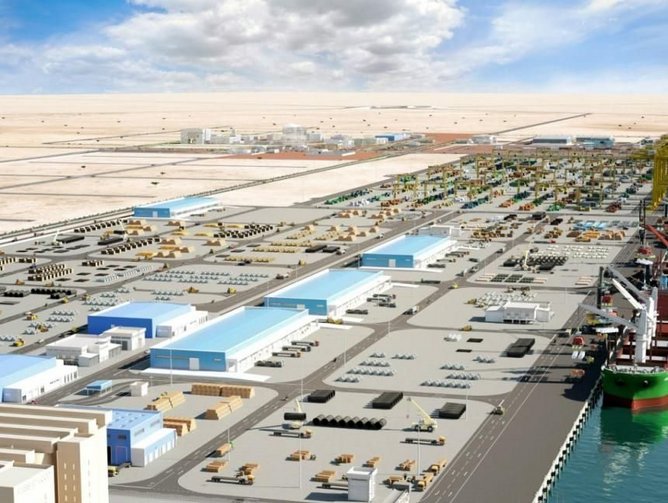 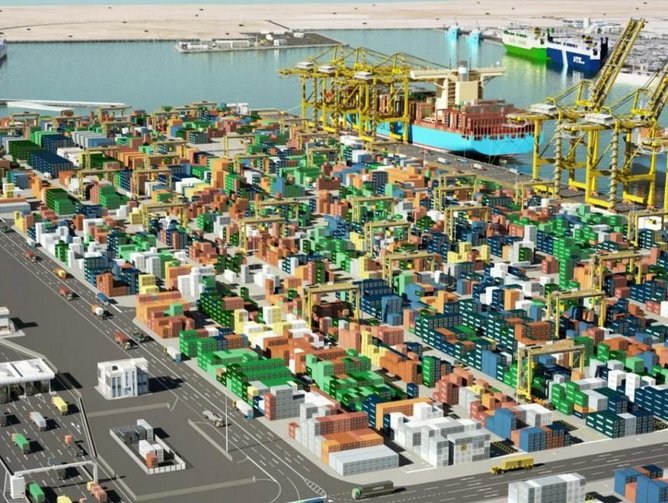 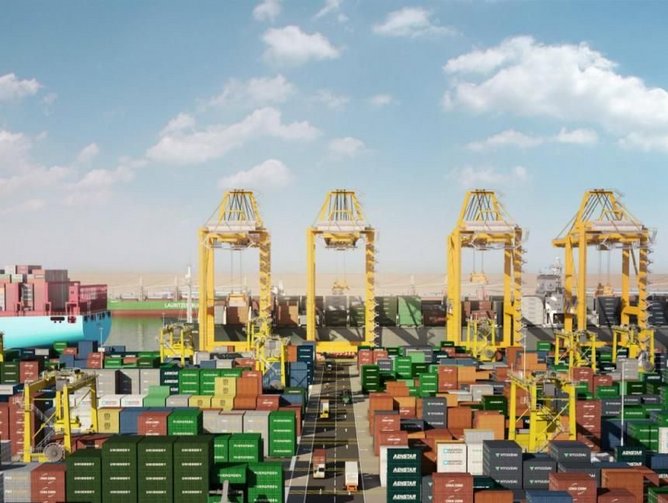