The consortium, consisting of four international entities, is currently mining bauxite in Guinea’s Boké region, then transporting it to China. SMB-WAP prides itself on “fast-tracking” whilst “with strict compliance” – that is going from excavation to export in minimal time. To find out how SMP-WAP balances speed, compliance, sustainability and spending, we spoke to Managing Director Frederic Bouzigues and Bosco Lau, CEO of the group's Winning Logistics Services.

SMB-WAP was established in 2014. Frédéric Bouzigues, who has lead the group since for two years, calls the consortium “a union of some of the strongest companies in their respective sectors”. Said firms are the Chinese Wei Qiao Group (biggest aluminium manufacturer in the world), Singaporean Winning International Group (transporter of 90 percent of Chinese bauxite imports), UMS Guinée SARL (leader in West African logistics) and the State of Guinea, which is a 10 percent shareholder in the project.

A year after forming, SMB-WAP’s first barge carried bauxite from Guinea’s port of Katougma. Before the consortium could achieve this goal, it needed to acquire permits from the government. “We firstly obtained a surveying permit so that we could do reconnaissance ourselves on an area that was not limited to the main mining body area in Guinea, in fact the first mine we explored and exploited had never been fallen into the radar of any other party – when the others sit on the country’s high grade reserves for decades without doing anything, we said we ‘Boleh’ (Malay word for ‘Can Do’)” Bouzigues says. “This took almost nine months. Subsequently, we obtained our exploration permit and followed the mining code to the letter, giving the government regular updates.”

SMB-WAP’s pooled financial resources (Lau notes that the project’s capital expenditure is $600-700 million) and in-house competences enabled it to progress rapidly from this point. The consortium carried out rapid drilling campaigns with its own equipment and staff, and with the help of its on-site laboratories, staff were easily able to determine which areas were prospects. “Once the results were positive, we applied for the mining license since we did not need to waste time for raising construction fund, seeking consultants/contractors, nor securing offtake. This came six months after obtaining the research permit and starting the production phase,” Frédéric Bouzigues says.

To enable production, the consortium established two entities in Guinea. Frédéric Bouzigues explains: “We have Boké Mining Company (SMB), which mines bauxite in the Boké region, and Winning Africa Port SA (WAP), which manages all of the river port terminal operations on the Rio Nuñez for the shipping of bauxite.”

The bauxite mining industry does not use any products, processing, drying or burning. Thus, excavation is the sole element in the process. Frédéric Bouzigues adds: “It’s worth remembering that at SMB we are dealing with people whose main task is logistical. We mine (moving ores from underground to the ground) the bauxite, load it in trucks that transport it to the ports, and from ports to boats it is transported by barges.”

With a field strength of more than 350 trucks (e.g. HFO tank trucks, fuel tanks and cement tanks), UMS carries out the land transport process. The West African company’s trucks travel via the only road leaving the mine, and transport the bauxite to the port of Katougouma. After they arrive, The Winning Group takes over the process. Winning built the river port of Katougouma with consortium funds. The harbour covers an area of ​​41 hectares and has four quays for the 17 bauxite boats of 8,000 tons. Winning’s boats ship the bauxite to China to be processed.

According to Lau, trans-shipping is a major component of the process. “It is the world's biggest transhipment system,” he says. “Similar standard operation models can be found in USA, Europe, Middle East, Australia and Indonesia. However, there is no match of scale.” Furthermore, the Winning Group’s 30 odd cape size vessels ensure ocean freight competitiveness and stability of Guinean products going to the far away PRC market.

The journey from bauxite to aluminium is achieved by “prudent, disciplined, quick and timely decisions”. Lau explains: “This is possible because of the mutual trust with the country [Guinea] and the people, and the consortium's own fund, competence and skilled staff to physically construct the project without the need of external assistance.”

SMP-WAP stresses that its “fast-track” process does not come at the expense of corporate social responsibility. “Fast-track is not achieved by cost saving,” Lau says. “In all aspects, the process is in compliance ‎of all regulations and CSR. We do this to unlock the country's mineral and river transportation worth, and for the country to fund the development of other business sectors, like agriculture, industry and tourism.”

Frédéric Bouzigues explains that SMB-WAP is heavily involved with the communities at all of its sites (“near the river terminals, in extraction areas, in the construction of living and logistics bases”). The consortium mainly focuses on employment - SMB-WAP is committed to employ in all the localities in which the project operates. It has also built a literacy centre which enables young people without training to gain skills, and then be hired by the consortium. In association with the Jiantsu Marine Institute, the Winning Group offers courses to train future Guinean tugboat and ocean going ship sailors: a worldwide market.

Lau describes further community efforts. “We support the state mineral reserves survey and initiated, sponsored and supported city planning studies by Surbana of Singapore and the Boké ‎special economic zone. The consortium has also arranged for Chinese and Singaporean potential investors to explore investment opportunities in Guinea,” he states. SMB-WAP also uses its logistics system to bring reliable, competitive two ways flows of goods and materials between Guinea and Asia.

We ask how SMB-WAP ensures minimal environmental damage. “The environmental impact is minimal because we primarily have an operation which is exclusively excavation without transformation,” Frédéric Bouzigues answers. “No drying, burning or adding chemicals. We are lucky to have bauxite treated as a block, which does not spread much dust in the air.” Moreover, making use of the unique high temperature high pressure high traffic volume operation environment, the consortium innovatively caused the haulage road to basically a dust free corridor.

Additionally, SMB-WAP has built programs for the rehabilitation and reorganisation of excavated areas. It will replant crops such as cashew and palm trees.

The consortium also recognises that it has an economic responsibility to the people of Guinea. Professional services network PwC monitors the payment of foreign exchange taxes from SMB-WAP to the state and SGS analysis of cargoes. “It is interesting to refer to an important point which was made precisely by PwC on the bauxite market,” Frédéric Bouzigues says. “SMB's entry into production has enabled Guinea to double its exports of bauxite from 2016 with about 12 million tonnes of bauxite already exported.”

SMB-WAP presents other impressive statistics. As of 2017, the consortium will increase its production, by adding one more port (the port of Dapillon) and another set of marine logistics equipment, making it the first bauxite company in the Guinea to export 30 million tons. Bouzigues expects this total to rise to 35 million from 2018 to 2022. In 2016 alone, SMB contributed US $30 million in mining and export taxes.

None of these achievements would have been possible without SMB-WAP’s partners. “The project has attracted and worked with stakeholders of international standard from all over the world,” Lau comments.  The consortium is supported by the expertise and resources of its partners, which are all leaders in their respective sectors. These partners include Vermeer (USA), Sinotrucks (China), Terex (Germany) and Bureau Veritas (France).

Despite substantial support from partners, SMB-WAP must retain some credit for itself. The consortium has defied borders in order to create an international team of mining experts, and SMB-WAP has developed a bauxite mining project in the period of a year, while it priding itself on giving back. The consortium recognises the potential of Guinea and its people, thus it empowers communities and boosts the countries overall bauxite exports. SMB-WAP plans to continue on the economically responsible trajectory. “We have two river terminals, each with a processing capacity of about 25 million tons of bauxite. So, if we have enough reserves, our consortium will be able to reach a production of 50 million tons. Combined with taxes this would have a considerable impact on the country's economy and its development,” Frédéric Bouzigues concludes. With this success and the consortium’s logistics strength, the consortium has decided to kick off intensive feasibility study of building a refinery in Guinea.

Beyond bauxite, the established infrastructure can and will be used for import of capital goods and CKDs (for the assembling industry to be developed), and the development of a regional hub in Boke for the West Africa region. For instance, fertilizers and pesticides can be imported cheaply and reliably to support a cashew nut project in the pipeline. 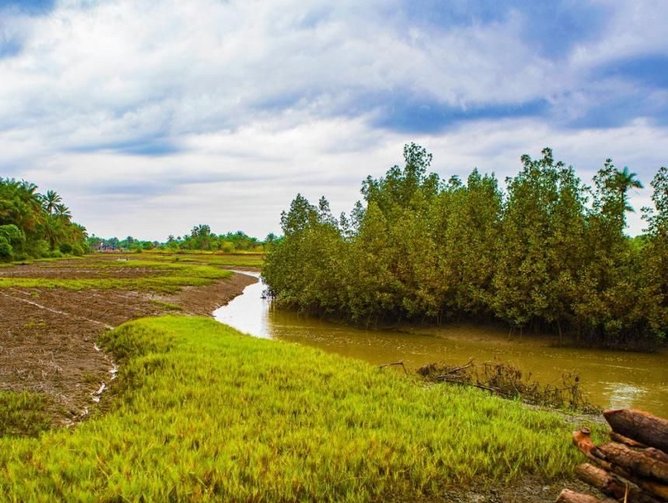 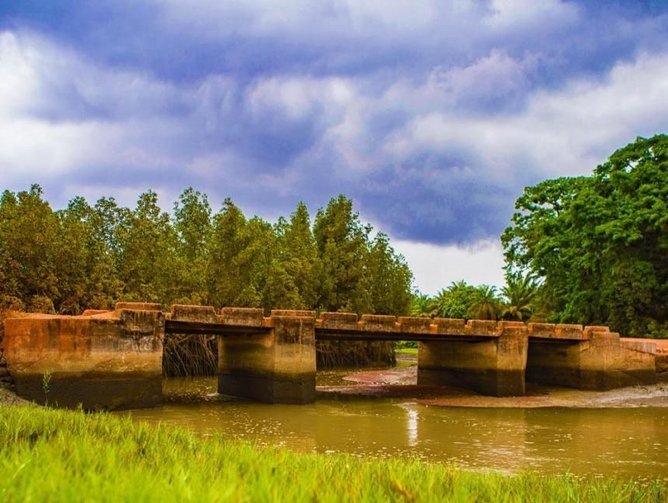 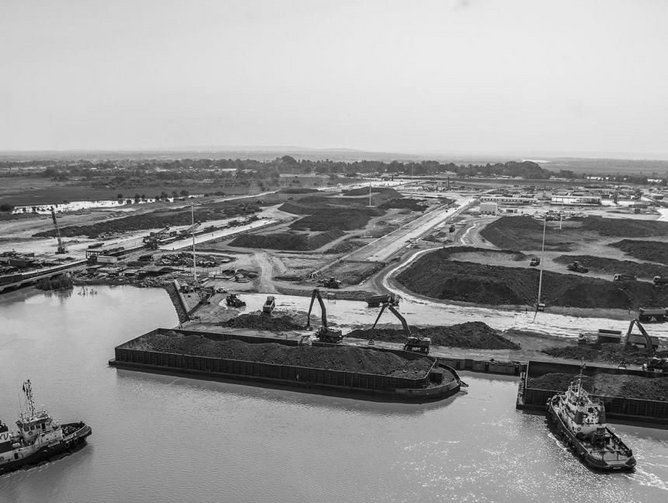 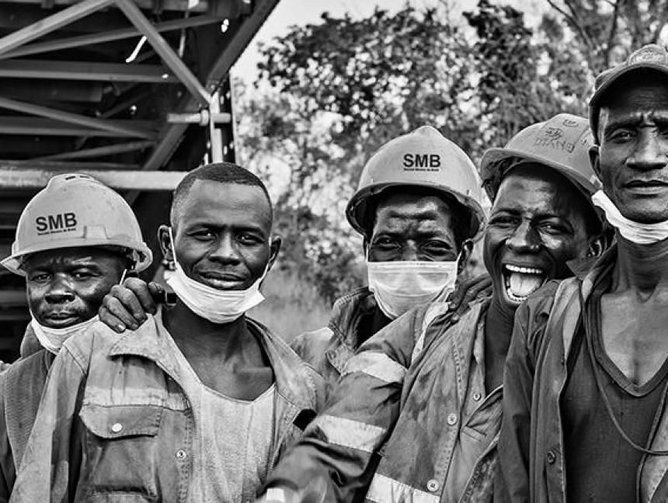