Khalifa Port Container Terminal, the new multi-billion dollar, state-of-the art, container terminal run by Abu Dhabi Terminals is one of the most technologically advanced in the world and is already expanding just over a year after it officially began operating.

To date more than one million containers have been handled since starting operations and it has achieved 1.9 million man hours without LTI. It also boasts 18 shipping lines offering 19 services direct from the terminal.

It has already beaten predictions by growing its business 15 percent year-on-year aided by Abu Dhabi’s booming economy and in order to meet increasing capacity demands has invested a further $70 million in new equipment.

The company has bought three more large, port-side cranes for offloading ships, bringing the total number to nine. It is also purchasing an additional 12 stacking cranes for shifting the containers around and a variety of other equipment used on the ground such as servicing trucks with a view to having it all in place by March this year.

Angelo de Jong, Abu Dhabi Terminals’ Head of Procurement and Material Control, said: “So right now we have the capacity to handle 1.2 million TEUs (Twenty Equivalent Units, an industry term used to describe 20ft long containers) but this new equipment will enable us to increase that figure to 1.8 million.”

Since the port became fully operational on September 1 2012, it has recorded a turnover of $100 million and as a semi-automated terminal it stands alongside six other ports across the globe which are equally or slightly more advanced.

As part of the Khalifa Industrial Zone Abu Dhabi (KIZAD), the container terminal  is strategically situated between Abu Dhabi and Dubai and boasts excellent hinterland connections via dedicated highway access and is near to four regional international airport hubs.

Operator Abu Dhabi Ports has been running ports since 1972, but changed owners a few times since then. In 2006, it was separated from the Port Authority to become a separate entity responsible for running three ports until 2009 when construction began on Khalifa Port.

De Jong said: “Since January 1, 2014, those three other ports have moved back to the control of the Port Authority and we are now solely focused on operating the new container port.”

Some 600 people are employed at the port which is a Private Joint Stock company owned by Abu Dhabi Ports Company, Mubadala and Mubadala Infrastructure Partners.

The port has direct shipping line connections with more than 44 other ports around the world which includes its local region, India, the east coast of Africa, Hong Kong, China, Singapore, New Zealand the Philippines and Europe.

“We are well connected to the world, which is important when you look at the local supply chain because now producers and consumers have the ability to import or export directly to all these locations so it opens up new markets for them which is helping to develop the Abu Dhabi economy,” said de Jong.

One of the biggest advantages of the new facility is that its semi-automation and technologically advanced systems have dramatically reduced the turnaround time trucks spend loading/offloading from three hours (the average for a conventional container terminal) to just 15 minutes.

However, in the early days of operation there were a number of hiccups as the new automated equipment which includes things like lasers, sensors and highly sensitive electrical equipment became operational.

“There were plenty of glitches,” explained de Jong. “The summers in Abu Dhabi are hot with temperatures in the shade reaching upwards of 50 degrees and it gets very humid. The new equipment had to be designed to cope with harsh weather conditions and in the beginning that put a strain on the operation.

“However, we have had the help of all the expertise of the various equipment vendors from around the world who ironed out these issues for us.”

Leading, household-name companies from around the world worked with ADT to construct the facility, including Hyundai, which built most of the civil works on the man-made island linked by a causeway purposefully built to accommodate the port.

On the equipment side were Chinese crane manufacturer, ZPMC, the Finnish company, Konecranes, and Terex.

Sustainability issues along with Health and Safety have played a crucial role in establishing the port’s functions. In order to protect a nearby coral reef, many studies were carried out to make sure the location of port would not interfere with the sea life and additional breakwaters were incorporated to prevent any spillages contaminating it.

“We keep a close track on how much energy is being consumed and CO2 emissions are recorded with targets to be met by all our employees,” explained de Jong. “We have also introduced things like LED lighting and implemented strategies such as driver behaviours to cut back on fuel.”

Employees at the port have come from all over the world, but ADT is working closely with local universities to find the best graduates.

“A large part of our management team is comprised of United Arab Emirate (UAE) nationals as we recognise it is vital the country has the ability to run the port itself,” said de Jong.

A master plan for the port has been established by the Abu Dhabi government which will allow for phased expansion over a 40-year time period towards an ultimate target for the port to handle 30 million TEUs.

Part of the expansion is the Free Zone industrial site located on the mainland adjacent to the port, which is aimed at providing warehousing and manufacturing facilities for those companies looking to use it for import and export.

“ADT will provide some of those facilities so that in time we can encourage many of our suppliers who are overseas to set up branches on our doorstep, which will ultimately help to reduce our supply chain costs,” said de Jong. “We are already talking to suppliers and this will be the next step for us.”

With two or three major competing ports located nearby including Dubai’s mega-sized facility, ADT firmly has its eye on growing the Khalifa Port’s business and with its exceptionally fast turnaround times for trucks, the competition may just need to watch out. 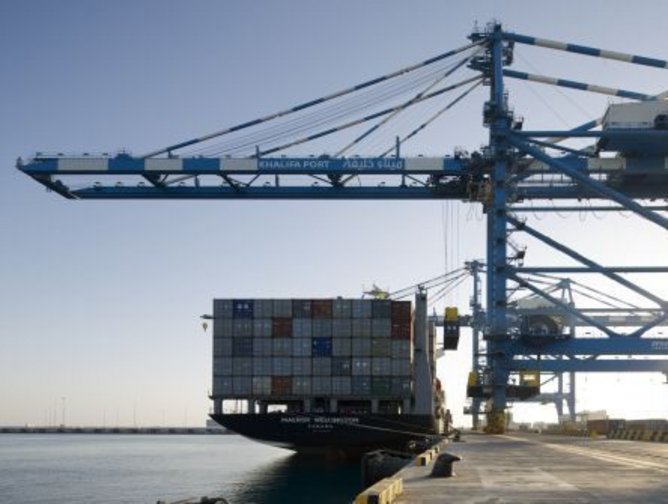