“Peiner Grabs” is a brand name in every harbour on the planet,” according to Rainer Veith, the CFO of Salzgitter Maschinenbau AG (SMAG), as he explains how the acquisition and the development of the grabs product range resulted in SMAG becoming an international brand.

PEINER SMAG Lifting Technologies (PSLT) is a subsidiary of SMAG, the worldwide leading manufacturer of grabs and lifting equipment that are critical to the flow of global supply chains.

SMAG is renowned for its problem-solving skills, bespoke products and close relationship with the customer, which are cited by Veith as three reasons for its global success in load handling equipment, process engineering and special machine construction.

“The secret of our success is that SMAG evolves with the times and re-invents itself - resilience is in our DNA,” said Veith, who joined the German-based company just after its centenary celebrations in 2019. “We now have a brand name that is known across the globe.”

Today, through its subsidiaries, SMAG is the world market leader in the manufacture of grabs used in global transport, waste management and agriculture. Other divisions include process engineering, special vehicles and mobile antenna masts.

The group, which employs 2,000 people, has dedicated manufacturing facilities in Germany, China and India, 27 locations worldwide and a reported sales volume of €300 million.

SMAG uses its expertise in metal and heavy steel construction in combination with hydraulics and electrical engineering. The three pillars of the business include:

Veith points out that process engineering in the sugar industry is another component of SMAG’s growing portfolio.  “In 2018, SMAG acquired 94 per cent of the BMA, the well-known market leader in process engineering when it comes to sugar refineries. They have double-digit million Euro projects around the world and are definitely an asset for the entire group.”

According to Veith, SMAG’s role in the market is based on the company’s pronounced problem-solving skills, superior, standard-setting products, high global sales power and global service.

“We have the whole range of grabs from the very small to the biggest ones, but most of our competitors have focused on one niche type of grab. By offering this complexity of grabs, we jeopardise a little bit on our economies of scale, but we must stay close to the customer and listen to their needs in order to be a one-stop supplier to them.”

One of the major milestones for the group came in 1986 when it acquired the grab technology division of PEINER AG. Its range of products includes bulk cargo and container handling as well as special hoists. Key areas of action are ports, ships, manufacturers of cranes and construction machinery, steel mills, waste-to-energy plants and recycling/scrap handling industries.

Six years ago, PSLT added spreaders for container handling to its portfolio, which are used in ports and terminals worldwide. The new subsidiary RAM SMAG Lifting Technologies Pte Ltd, headquartered in Singapore, manufactures the products under the brand RAM Spreaders in Changshu (China).

“We are the industry leading grab manufacturer,” said Veith. “Some of the grabs can be up to 30 - 45 cubic meters in volume, and one grab can weigh up to 18-22 tonnes - so this really is a dream for big kids captured in adult bodies - they are the coolest products,” said Veith.

A century of engineering excellence

The foundation stone for SMAG was laid in 1937 when the Salzgitter Group took over the factory for the construction of drilling machines. In 1986 the company acquired the gripper product range from PEINER AG and, over the years, expanded it into an international brand.

Jürgen Bialek who has been with PSLT for 51 years and was pivotal in building up the successful grabs business not only in Salzgitter but in the Asian companies as well said during the 100th anniversary: “..50 years of Peiner grabs – they are like a part of my family.”

Commenting on the subject of procurement within SMAG, Veith said: “Procurement is for me a leading edge when it comes to value creation. It would be utterly wrong to see only the transactional part of procurement, but my staff has to challenge traditional views and tendering practises and constantly look for better sourcing options. Do not underestimate indirect procurement but see it as the best chance for savings. For example, SMAG: Purchasing volume per annum in Germany approximately €100m, of which indirectly €20 million, of which 10 per cent saving equals €2 million, which would be equivalent to a reduction of 30 FTEs.

“For me, the core elements of value creation are sales, procurement and production. Other departments are all important, but if one of the three core elements fail, every company is at risk of insolvency in the medium term.

“Procurement successes are easier and less painful than staff changes, and for new technologies, procurement is a driver of innovation.

“Leadership by CFO facilitates independence, but is not absolutely necessary; it can be any C-Level person who is seriously backing procurement,” he said.

Veith cited the group’s competitive advantage as having a strong infrastructure with a production network in several countries, plus it is built on a long tradition of being able to evolve with the times and re-invent itself, “which is crucial in today’s climate”.

“We are a very global network. As a middle-sized German company with a sales volume turnover of €300 million, we can leverage this production network and the sourcing possibilities that [go] along with that.  Also, to have a construction base with very skilled engineers in India, and also here with our traditional construction in Germany, is a great asset, which few middle-sized German companies actually have.”

Commenting on how SMAG continued to operate during the pandemic, Veith, who started with the company in November 2019, said he was fortunate enough to travel to India and Singapore to see the facilities before restrictions were in place.

“We switched to Zoom or Team meetings and adapted our facilities for increased health and safety, but apart from that, our supply chain has been very stable. We see transportation costs going up, but overall, we have not had any shutdowns due to lack of supplies, which [proves] our business model works and that our supply chains are very stable.

“In India, Russia and America, our industry was deemed as system-relevant, so we came out of shutdown early, and our affiliates quickly caught up to reach and exceed budgeted revenue levels. Overall, our sales did not suffer any consequences from the pandemic. We have been fairly unharmed and remained robust throughout the crisis, which is good news.”

“Shrinking core expanding periphery - this is how my MBA professor Ranjay Gulati described strategic alliances, and I think it is true today,” said Veith. “This allows the company to focus on the core tasks and look outside of the periphery for help with R&D or innovations they do not have the capacity for such as digitalisation, robotics or Artificial Intelligence (AI).

“We do not have the in-house capabilities to develop AI, and we would not, but it does make sense that we invest. We need to partner with suppliers [and] companies who have that intelligence and knowledge. We need to develop our ecosystem even further to get ready for the challenges of the next decade.”

Veith cited the importance of their “seamless” partnership with Open Systems and comments on how ecosystems today help a company.

“Open Systems is a crucial partner for SMAG as we use them for data exchange with our Asian affiliates. It works really well, and it's vital for us to work together on the exchange of information about production and developments in the market. It’s very important for us that the process is seamless and easy, and this is what Open Systems provides for us.

“In order to be successful in the future, we have to be a bit more modern, younger, dynamic and more diverse. We have to drive lean management and operational excellence. This is definitely something that is already underway and will be the key for future success, said Veith.

SMAG also acquired BMA in 2018, a market leader for the process engineering of sugar  refineries.

In 2015 NSL in Singapore and Salzgitter Maschinenbau AG merged their spreader and grabs divisions as part of a joint venture under the leadership of PEINER SMAG Lifting Technologies GmbH (PSLT). This is one of the world's leading manufacturers of grabs for handling bulk goods and for board cranes.

This merger resulted in the world's largest group of companies for load handling equipment in the field of bulk goods and container handling. The partnership enables the group to exploit even greater market potential in addition to the port equipment sector.

SMAG wants to expand its position in the market as the world's leading provider of grabs and spreaders for efficient freight handling.

It is relying on the growth market of maritime freight traffic. For this, SMAG can fall back on many years of experience in metal and heavy steel construction and on independent competencies in construction, production and assembly. The local presence in the large volume markets (China, India) is being expanded.

In addition, SMAG is focusing on expanding its presence in the global mining technology market with a focus on drilling technology underground and above ground, as well as building special vehicles for mining and process industries, such as steelworks.

SMAG’s corporate strategy is geared towards sustainable and profit-oriented growth.

How are you using AI or machine learning or big data, and what possibilities do they bring to the future of SMAG?

“We are doing this already, especially at BMA, in process engineering. We plan to ramp up our efforts in coordination with our customers, and we'll pick up speed in the near future.”

What plans do you have for the future - will you be opening in a new country, or are there new acquisitions in the pipeline?

“I think that the group has evolved quickly with its mergers and acquisitions over the past five years. It’s now time to consolidate, to improve our efficiencies and continue to grow organically.”

SMAG has been operating for more than 100 years - how would you sum up the secret of your success?

“During the past century, we have evolved with the times and have re-invented ourselves - resilience is in our DNA.”

Life outside the office with Rainer Veith, CFO at SMAG:

What did you enjoy about life in Worcestershire, UK?

A more relaxing way of life in the shadow of the Malvern Hills and living by the River Severn in the UK.

What country do you want to visit?

Paris, France to play in the European Senior Golf Championships.

What is your favourite cuisine?

What is your most precious possession?

Pirates of the Caribbean

What advice would you give to a young Rainer Veith?

Do what you love most and then work hard for it. 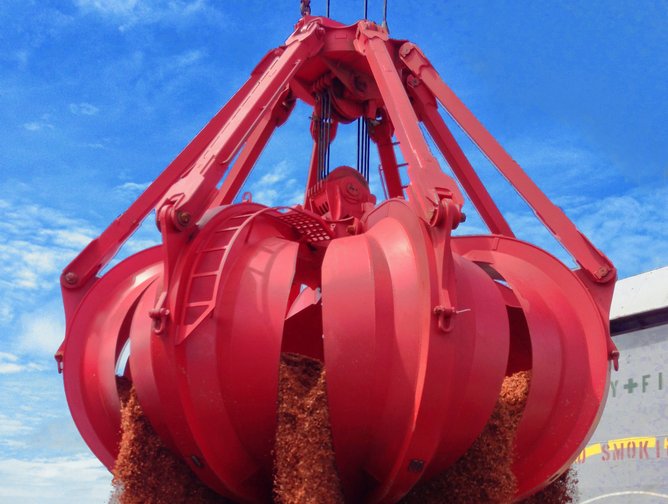