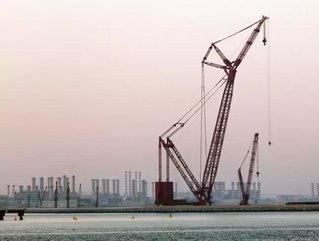 The Port of Port Said is the 28th busiest seaport in regards to container transport. It is located in the city of Port Said in Egypt and is the second busiest in the Arab world.

Port Said East is home to the Suez Canal Container Terminal (SCCT) and is over 19 kilometres long (12 miles). It is located east of the Northern entrance to the Suez Canal and is considered to be one of the most important ports in Egypt.

The Port of Salalah is located in Oman and has been operating since 1998. The port is partly-owned and managed by APM Terminals which is one of the biggest container terminal operators on the globe.

Since the ports opening in 1996, it has had to invest roughly $800 million US dollars in infrastructure to be able to handle the world largest vessels. The port of Khor Fakkan is located on Sharjah’s Indian Ocean Coast in the United Arab Emirates. It is the only natural deep-sea port in the region and one of the major container ports in the Emirates.

The port has six quays with lengths of 2,000 metres and takes up a total area of 700,000 square-metres. There are 26 yard gantries, 30 container handlers and 116 terminal tractors.

Phase 2 of a large expansion has recently been completed at the port. This new expansion now means that the port can provide four Mega-Max Tandem-Lift cranes on 800 meters of berth, with 16 meters of draft alongside.

The port now has over 450,000 square-metres of overall storage space.

The Port of Jeddah is located in Saudi Arabia and was established in September, 1976. There are 58 berths of international standard that are in service today and it is the largest sea port on the Red Sea. The Port of Jebel Ali is situated 35 km south-west of Dubai in the United Arab Emirates (UAE) and was constructed in the late 70s and opened in 1979. It was built to supplement the facilities at Port Rashid (which opened in 1972). It is the biggest man-made harbour on the globe and is also the largest and the busiest port in the Middle East.

The small village of Jebel Ali was created specifically for people who worked at the port and has a population of just 300 people.

The port won the ‘Golden Award’ for the ‘Best Seaport Overall’ from the Higher Committee for UAE Civil Seaports and Airport Security in April, 2011 and has also been voted the ‘Best Seaport in the Middle East’ for 20 years running.