What's the point in a new £5 note when society is turning cashless? 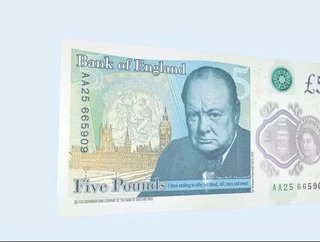 The UK has launched a new plastic £5 note, designed to counter fraud, better serve the environment and not break as easily as its predecessor. It features WWII Prime Minister Winston Churchill.

New £10 notes and £20 notes are also due to arrive before 2020. But why now, especially given the increasing use of cashless payments and smart technology to move around money?

Doron Cohen, CEO of Covercy, commented: “Nearly five years on since the Bank Of England last introduced a new banknote, the benefit of circulating a new five pound note now is quite questionable, due to a payments revolution currently underway in the UK.

“Britain is well on its way to becoming a cashless society, as last year, for the first time, notes and coins were used in less than half of all payments. A key driver in this has been the adoption of contactless cards, with monthly spending by this method reaching a record £1.5 billion this year, roughly three times the level of 2015. Not only this, some long-standing British institutions are actually becoming cashless too, such as Transport for London (TFL) who banned cash on the buses in 2014 and has saved £24 million in cash-handling costs already.

“From a security point of view, banknotes are a nightmare due to being untraceable, with at least half in circulation being used for a range of illegal activities. UK businesses bear the brunt of this problem, with over 240,000 counterfeit notes being discovered last year alone. The financial powers-that-be should focus future initiatives instead on helping contactless to grow further, especially amongst businesses in the UK. Moving to a cashless society has immense benefits for British firms as such payments are fully traceable, secure and also decrease the risk of money laundering.”