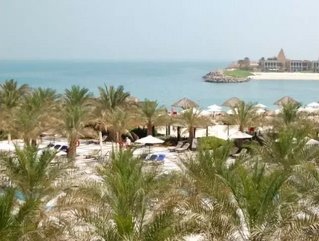 The one billion Dirham project in the northern UAE emirate of Ras Al Khaimah involves the development of a natural island. It is scheduled for completion in 2017 and will feature150 luxury villas and mansions – most of which will be on the beach, with some on a central canal that will divide the island, comprising one of the key features that will be developed by China Harbour Engineering Company, Al Hamra said in a statement.

The Chinese firm will also be responsible for landscaping private and public beaches and power, sewage, and road networks. Existing beaches at Al Hamra Village will also be enhanced as part of the contract. Work will begin this month, with completion due by October 2016.

Launched in March 2014, Falcon Island aims to be the first construction project in the GCC to achieve LEED (Leadership in Energy and Environmental Design) platinum rating. LED street lighting also forms part of the plan.

Work at Falcon Island involves reshaping the island and creating beaches. Powered by solar technologies, the development will feature hybrid district cooling systems and other smart technologies to allow residents control energy consumption. It is expected that properties at the development, containing from five to eight bedrooms, will be marketed at between $1.4 million and $6.4 million.