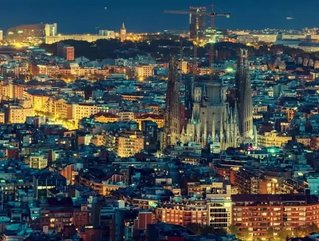 Business Chief takes a look at what the capital of Catalonia has to offer for business.

Located on the coast of the Mediterranean, Barcelona is the capital of Catalonia and the second largest city in Spain after Madrid.

According to the official website of the Barcelona Metropolitan Area (BMA), the metropolitan area of Barcelona is the economic core of the Catalonia region, accounting for over 50% of Catalonia’s GDP and workforce.

With a population of 3.24mn in the metropolitan area and a population distribution of 58% Catalonian, 22% from other areas in Spain, and 19.2% foreign, Barcelona accounts for 10% of Spain’s total GDP, according to the BMA website. According to Barcelona.com, it is also the second most densely populated region in Spain, with 196 people per sq km. The city has enjoyed relative stability with regards to population over the past decade, accounting for 1.6mn inhabitants since the 1990s, housing 1.6mn people at the start of 2015, according to La Vanguardia. The population is varied, with 170 different nationalities living together, and includes 23,000 people over the age of 90 and 702 people over the age of 100, according to La Vanguardia.

While the unemployment rate increased to 16.55% in the final three months of 2017, according to Trading Economics, Barcelona has been keeping its head above the water. In 2017, the University of Barcelona was ranked first for graduate employability among the public universities of Spain, according to the university’s website. The University of Barcelona is also competitive on an international level, ranked in the 61-70 range, standing out in university-company collaboration and overall graduate employability.

Barcelona is a hub for tourism. According to CNN, it pulled in approximately 36% of all foreign investment in Spain in 2015, and surveys have found it to be the fifth most attractive European city to international investors. 8mn tourists stay at least one night in Barcelona, and according to Euromoniter it is the most popular cruise port in Europe. Other sectors in which Barcelona does well are transport, industry and manufacturing, information and communication technology, media, biotechnology, energy, design, research, agrifood, logistics, and medicine. It has also made large strides in the environmental sector, which, according to Meet Barcelona, provides employment for 42,500 people in the city.

Due to its coastal location and proximity to France, Barcelona has been a pivotal shipping centre for hundreds of years, providing a middleman between Europe and the Americas and North Africa. According to CNN, 2016 saw shipping reach a record high with regards to cargo volume, passengers, and vessels; in the same year, Barcelona’s airport was named by the Airports Council International as Europe’s seventh busiest airport. Moreover, Barcelona provides a centre for industry and manufacturing. Approximately a third of all Spanish exporters have headquarters based in Barcelona, while approximately a third of all foreign companies operating in Spain base themselves in the city.

Information and communications technology is another leading sector in Barcelona, accounting for over 7% of the city’s economy, according to Meet Barcelona, which matches CNN’s figure for the amount that hotels and catering bring in. Not only does Barcelona host the yearly Mobile World Congress, but it is home to particle accelerator facility ALBA synchrotron and the Barcelona Supercomputing Centre. King, owned by Activision Blizzard and the developer of the widely-popular game Candy Crush, opened large offices in the city in 2012.

Barcelona is home to several industries that rank on an international scale, making Forbes’ Global 2000 list.

FCC
FCC, 1,223 on Forbes’ list, operates under the sectors of infrastructure, water and environment. In the environmental sector, the company undertakes street cleaning, park and garden maintenance, and treating industrial and domestic residue. In water, it operates under the brand name Aqualia, working on large infrastructures, as well as in homes and businesses. For infrastructure, it operates as FCC Construcción, designing, developing and maintaining infrastructure on a global level, and Cementos Portland Valderrivas, leading in Spain’s cement production. According to Forbes, it makes $14.7bn in sales, has $25.1bn in assets, and has a market value of $1.3bn. Established over 115 years ago, employing over 57,000 people, and operating in over 40 countries, FCC makes a name for itself in both national and international economies.

Abertis
In 628th place on Forbes’ Global 2000 is Abertis, a road construction company. It reportedly makes $5.2bn in sales, has $37.2bn in profits, and has a market value of $14.3bn. It is an international leader in road construction, with over 8,600km under its belt in 15 countries across Europe, Asia and America. Over 70% of its earnings come from outside Spain, primarily from France, Brazil and Chile.

Fenosa
The highest-ranked Barcelona-based company on Forbes’ Global 2000 is gas and electricity company Fenosa, standing in 239th place. It makes $32.9bn in sales, has $60.4bn in assets, and has a market value of $20.4bn. Operating in over 30 countries for almost 22mn customers, it earns its place as a multinational corporation.

Recently, Barcelona has been making a name for itself as a smart city. The British Standards Institute defines the smart city as “the effective integration of physical, digital, and human systems in the built environment to deliver a sustainable, prosperous and inclusive future for its citizens”. A report released by Philips Lighting and SmartCitiesWorld ranked several cities by how well they adopt the “smart city” mindset. Singapore came first, followed by London. Barcelona placed third, its ranking a result of its integration of the IoT in a network of devices across the city connected via the internet, which has provided 47,000 jobs for Barcelona, according to Energy Digital.

Cisco decided to base its Internet of Everything innovation centre in Barcelona. Some of the city-wide implementations include 500km of optic fibre, free wi-fi via street lighting, and sensors designed to monitor air quality, parking spaces, water usage in city parks, and rubbish bins. The sensors in the city parks increased water conservation by 25%, saving approximately $5.55mn, according to Data Smart. Barcelona has been the one of the venues for the Smart City World Congress, which sees over 17,000 professionals, 600 exhibitors, representatives from over 650 cities, and 400 experts. It was the event’s success in Barcelona that spread it across the world, now with venues on four continents.