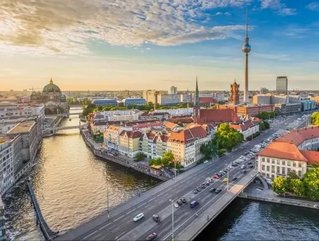 With insight from a global business leader, we have taken a look at Berlin’s recent development and why it is attracting workers and entrepreneurs from around the world.

In recent years, Berlin has proved itself as a city overcoming problems and climbing to new heights of influence, both at home and on the world stage, with a bright future ahead.

The German capital has a steadily growing population that is now approaching four million and is the country’s largest city as well as the second-most populous in the EU.

The appeal of modern Berlin
Berlin's foreign population is immense, second only in Germany to Hamburg, with more than 190 different countries represented among the 621,000 registered foreign residents. Only one in four local residents today is a born and bred Berliner. In some ways, the city represents a clash of cultures.

About half the population is single, or at least not married in a traditional way. Berliners love music and celebrations: three major opera houses compete for attention with late-night clubs, noisy beer halls, and the world’s largest beer garden. The city's bridges outnumber those in Venice, and it boasts more water than Venice, Stockholm and Amsterdam together. The modern city, home to Germany's tallest structure, Fernsehturm Berlin, is considered the country's greenest metropolis, and it also is home to three UNESCO World Heritage Sites.

Berlin is a popular city for visitors, but it is also very much a working city, both in terms of governmental and private business. Among German cities, however, it is not the most prosperous with disposable income lower than the national average. On the flip side, however, living in Berlin costs less than in other European capitals or other German cities. Rent, food and recreation are more reasonable than in other large cities. Particularly for students, the cost of living is affordable, and the quality of education is high. The city consistently earns high marks for educational excellence, especially in the sciences.

Fields of employment
In 2017, based on EU assessments, the main sources of employment in Berlin fell into the major areas of real estate; professional, scientific and technical services; retail and wholesale trade; motor vehicle maintenance and repair; and social work and residential care. In addition, Berlin’s location in Northern Europe is ideal for supplying goods and services to the rest of the continent and beyond.

Since Berlin’s reunification in 1990, the intervening decades have brought many changes. Berlin’s story is one of job growth: a young population and an eager, well-trained work force is prepared to fill the many positions that are created annually to service a growing population.

The city faces some uncommon problems associated with its international population, but vocational and technical schools do an admirable job of preparing many students for success in business and industry. The unemployment rate, however, reached 9.6% in 2017, and even though that number was a full percentage point below the previous year, it is still substantially higher than the rest of Germany.

Transport and mobility
The most important sector in Berlin is transport – but it’s not just about Rolls Royce, Volkswagen and Mercedes-Benz, as important as they are to the economy. Sustainability-focused electromobility, as well as aerospace, are key to the continued growth and health of transportation-related firms. The city is also a global force for logistics and telematics services, and a leading centre for rail technology and intelligent transport systems.

Global education offering
More than 180,000 students were enrolled in Berlin's institutions of higher learning during the 2016/2017 school year, with foreign students accounting for nearly 20% of the total. The city's four universities, scientific institutions, art colleges and institutes, along with more than a score of state-recognised private institutions, are highly competitive and sought after. In addition, there are more than 70 research institutes that are not affiliated with universities. The availability of partnerships with other global institutions is high, and a high percentage of students in Germany are from China, the United States and Russia. Annually, Berlin invests approximately €1.5bn ($1.75bn) in its educational institutions in an effort to maintain programs and quality instruction.

Family matters
A family friendly lifestyle, with an emphasis on childcare and early childhood development, including universal all-day primary schools, is the norm in Berlin. In addition, there is a multitude of recreational opportunity, leisure-time activity and diversified sporting events. Social welfare infrastructure targets a high quality of life and an excellent public transportation system makes access to amenities easy for residents. Family support services and child advocacy programmes seek to improve the social well-being of all, old and young, native residents and new arrivals.

Berlin is a distinctive city in many ways. While it is still in a growth and development mode, it recognises its unique challenges and has taken positive steps to address them. The fact that it is the capital of the country means that the world's eyes will continue to be trained on the city. So far, it has responded in an exemplary manner.

Spreadshirt – a global business
Spreadshirt is a global print company that was founded in Germany and retains an important hub in Berlin, despite having expanded across Europe and into the US. We asked CEO Philip Rooke why he things Berlin is the place to do business.

Why do businesses thrive in Berlin?
“As a whole, Germany is an easy place to do business on an international scale. In particular, Berlin has great talent, is cost-effective and is becoming the new business hub of Europe. Since Berlin is already a major city, and Brexit has affected the world view on London’s role in the EU market, Berlin has become attracted to talent. Many people are travelling from all over the world to Berlin, who used to travel to London. In addition, the cost of living for that talent and the cost of rent and other services for business are much cheaper. This environment makes the city a number one choice for startups.”

Why is Berlin an important hub for Spreadshirt?
“Some of our key talent (including myself) lives in Berlin, and while we are headquartered in Leipzig, Berlin was the place we were more able to set up our pan-European marketing and sales, due to the more international base of the workforce. We also just love the vibe of the capital city.”

Tell us about the spirit of entrepreneurship in Berlin.
“Berlin is a vigorous, cultural and creative city. It was like London and San Francisco 15-20 years ago. So many new companies are starting here every day, and some are now growing to an international scale and reaching the stock market, such as global food business Lieferheld. For a capital city, Berlin offers a higher standard of living at a relatively low cost, and as it’s smaller than some European capitals, it’s easier to connect with people. It’s full of talent and exploding with ideas.

“All in all, people and businesses come to Berlin for the everyday incentives of culture, talent, cost, and frankly, to be where the other entrepreneurial companies are.”