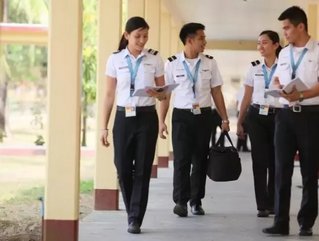 Alpha Aviation Academy is a pilot training school that works with Air Arabia to supply pilots exclusively to the airline. It’s a joint venture between UK company Alpha Aviation Group and the Air Arabia Group. The company takes a trainee pilot from zero hours through to a fully qualified First Officer.

The region’s airlines and airports are expanding and this is something Alpha Aviation was well aware of when opening its training operation. General Manager of Alpha Aviation Academy Victor Brandao said: “Alpha Aviation Group was looking to invest in the region because it was growing. Air Arabia was looking for pilots to supply the airline and the two companies came together in this win-win situation; one getting the business and one getting their own school to produce pilots.”

Normally, when someone wants to train as a pilot they’d go through an academy from zero to the required 320 hours of flight time. At the end of the training when all the exams have been passed, they’re then on their own to go off and find a job, which can often be difficult. Alpha Aviation Academy takes this uncertainty out of the equation, as Brandao explains: “This is one of the few programmes where you can get a guaranteed job as a pilot at the end.”

While the academy welcomes students from any country and from all walks of life, they do have to go through a selection process to be accepted. This looks at skills in a range of subjects as well as more physical tests. Brandao said: “Our selection process includes exams in maths, physics and English, as well as psychomotor and psychometric tests. If they pass they go on to have an interview with Air Arabia and Alpha Aviation. If they pass this, they go onto the programme.”

The programme is a direct path through to becoming a fully trained pilot. Brandao explained what trainee pilots could expect from the course: “They start at ground school for their pilot’s license followed by 70 hours flying a single engine airplane. This is their first experience with plane as a pilot. Then they start specific training for the commercial Air Arabia Airbus planes. The basic programme includes multi-group cooperation and instrument training, and simulator time. This then goes onto specific training for the Airbus A320 and the required simulator time needed to qualify to fly the plane.

“The final exam features nine real landings and take-offs. This is the final step in becoming a fully qualified Air Arabia pilot.”

Brandao oversees all the operational running of the courses, he is also a pilot himself for Air Arabia. Having trained elsewhere at the start of his career, he’s confident that this is the best path for aspiring pilots as it takes the effort out of finding a job at the end.

Recruitment isn’t limited to those within the UAE, in fact the academy has students from 52 different countries. Brandao said: “The trainees come to us from other countries through our website and the Air Arabia website. Most do research into becoming a pilot and look for information on social media, blogs and through Google. They find people talking about us online and get in touch through our website to start the programme. This is how we get people from all over the world.

“We also have Facebook and although we could be more active, the programme speaks for itself and because our students are happy with it and they talk to each other on social media, they are fantastic brand ambassadors!”

There’s been a recent increase in more women coming through the programme and Alpha Aviation Academy was the first to graduate a female Emirati pilot. Brandao said: “We have a very good number of female students. We have women from Europe, India, Korea and other parts of Asia. Part of our success is that we treat women and men the same way. They have the same rules, requirements and training. We are more than happy for both men and women to apply and we treat them equally. There’s no special treatment based on gender.

Because women are qualifying as pilots, it shows other women it’s a viable career path. While it may once have been a male-dominated profession, that’s starting to change. Being a pilot can work for both men and women who might have families they don’t want to spend too much time away from. Brandao said: “Although this is a demanding profession where you can spend too much time away from home, it can be made to work. You can have a family and be a pilot. Air Arabia allows anyone with a family to be home every day, which is the reason a lot of people choose us. Our pilots can have a normal family life, something they might not be able to get with other airlines.”

Running a training academy such as this is no simple feat because so much relies on the weather. Brandao explained the reactive nature of the business: “The planning is complex and you can’t just plan for an 18 month training programme and not touch it. There is a daily challenge of adapting, adjusting and rescheduling all the resources. We have 188 students training so we need to constantly adjust based on simulator availability, weather, technical issues and more.

“We have safeguards in place, especially for the simulator. The first 70 hours flight time also depends completely on the weather as the small single engine planes can only fly when it’s clear. If the weather is bad there is nothing we can do and there’s an unavoidable delay. I have to reschedule everything in order to not affect the rest of the training. Often, if the weather is bad, we try to recover those lost hours during the weekend.

“It’s a plan that’s always changing and every day I look at it to see what we need to do to speed it up or reschedule something.”