Interview with Noor Al-Qatami, the CEO of Saveco in Kuwait 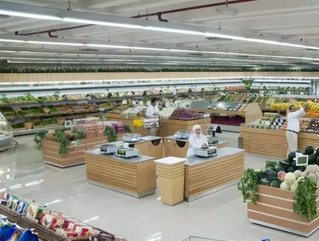 Saveco, Kuwait’s biggest and most successful supermarket, is a true success story. Founded by Noor Al-Qatami, the company’s CEO, just two years ago, the store’s popularity has proven astronomical in an impressively short amount of time. Al-Qatami was determined to develop the brand quickly as a reaction to customer needs, and marry the twin ideals of high-quality with accessible produce.

Organic, vegan, gluten-free, and many luxury items that are not readily available to the average Kuwaiti citizen can be found at Saveco, to the point where shoppers are able to dictate what Saveco sells.

“We decided to develop a system where customers can come in and request an item; we then order it for the store, and it is then put on the shelf for other customers as well,” says Al-Qatami. “It’s a more specialised service for the customer, where they feel they are being treated like a VIP. This is not just a supermarket, it is their own store; a store that they have a say in.”

This special treatment of customers is key to the company’s success. Saveco has an unusually large social media presence, and the CEO herself handles the accounts, allowing customers to speak to somebody who is multi-lingual and enabling Al-Qatami to connect with them on a more personal level than most bosses would.

“The reason I wanted it to do it this way was because when I looked at social media accounts in Kuwait, they were always neglecting the customer,” she explains. “I wanted to have a relationship with our customers. I can answer people back in their own language or dialect, and they go away feeling extremely content. It’s satisfying for everybody involved, and ensures that the customer returns to us.”

Saveco also offers a delivery system that can be used via WhatsApp; Al-Qatami says that people in Kuwait generally prefer messenger services as they dislike talking, either on the telephone or face-to-face, when it comes to ordering from stores. Customers have the option of simply sending an image of what they want to Saveco staff, or even asking to see what range of a certain product the shop has, at which point images would be sent to them in order to let them choose the item they desire. The messenger service is free, as is the delivery itself.

One of Saveco’s most impressive features is The Food Academy, a cooking school located in the middle of the store which allows customers to learn new skills in the kitchen. Young school children can book sessions of cooking or cake decoration, but the system is aimed very much at adults.

“In Kuwait, most people don’t cook as they have chefs in their homes,” Al-Qatami explains. “They wouldn’t know what to do with quinoa, for example. We decided that if they wanted to get on the bandwagon and eat quinoa, why not teach them? They are coming in and buying the product, so they really should learn different ways of incorporating it into their meals. Kuwait has the highest obesity rate per capita; we have a responsibility of helping people eat healthier meals.”

Al-Qatami identified gaps in the food market and filled them, for example by conferring with a coeliac organisation to develop a gluten-free section. The Saveco team even went so far as to re-organise the aisles to bring the gluten-free products closer to the door, allowing coeliac children to choose a snack quickly rather than being faced with all of the food they can’t eat. The shop then also offers a kids’ area on the top floor so that they can play while parents shop in peace.

Al-Qatami admits that finding staff was difficult at the beginning, because nobody knew how successful the business would be. Two years later, Saveco has become a family, and Al-Qatami believes this to be one of the most important elements of the company:

“They are not merely employees,” she states. “Once they pass their three month probation, we take care of them, not just through work but everything else as well. For example, when one of our employees passed away, our COO flew with the body to the man’s homeland to be at the burial. We made sure the burial and reception fees were covered, and continued to pay his salary to ensure his kids are supported. We try to go above and beyond for our staff.”

Al-Qatami has by no means achieved what she wants. Her vision of what she wishes to accomplish is not even five percent there, she says; she plans to make Saveco international, and develop into the retail business. She is among the top 100 most powerful Arab women, and attributes this to attitudes instilled in her by her parents.

Her father, a successful businessman himself, never told her she was different because of her gender, and encouraged her in her ventures – whether they failed or succeeded. Al-Qatami conducted a TEDx Talk last year during which she described her background and triumphant career, and she showed enormous good humour in the face of those who judged her for her gender.

“Women often put barriers in front of themselves simply by thinking of themselves as different from men,” she says. “If you acknowledge that there is no difference, then there is no barrier. It doesn’t make a difference to me if someone realises I’m the boss or not, because the bottom line is if they want to do business, they have to come to me. Things are changing here; women aren’t having to fight as hard, and they are part of every element of the working world. The CEO of the top bank in the Middle East is a woman.

“Some parents in Kuwait treat females differently to males; they will open doors for their sons that they wouldn’t open for their daughters. My dad taught me that if you work for it, you will get what you want. He believes in me, and that was one of the most vital elements to my success.”