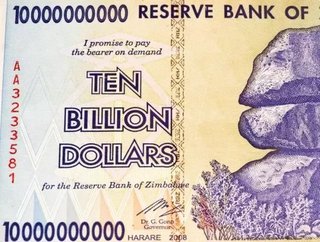 Many Zimbabweans fear that the introduction of ‘bond notes’ will trigger an economic catastrophe.

Sometime between August and October, the Zimbabwean government will begin to circulate bond notes. These will function as the equivalent of the US dollar (Zimbabwe's current tender), without actually being a currency. Bond notes will have no value outside Zimbabwe.

There is significant resistance to the bond notes. Several citizens fear that  bond notes will take Zimbabwe back to 2006 - 2008, when the nation suffered the worst hyperinflation in history (peaking at about 500 billion percent). Many Zimbabweans feel that the move is a government ploy to introduce the Zimbabwean dollar, which was destroyed by hyperinflation a decade ago. During this time, bank note printing was poorly regulated.

Central Bank governor John Mangudya told reporters he sympathised with Zimbabweans, adding that “the fear factor is very high”. However, the authorities insist that bond notes are not an attempt to reintroduce the Zimbabwean dollar. The government claims that bond notes will provide an incentive for exporters.

The government’s reassurances have been largely unsuccessful; many people have been queuing outside banks to retrieve their money.

“The banks are emptying as we speak,” said a board member of a foreign bank in Harare.  “These new, so-called bond notes are Zimbabwe dollars which went to private school.”