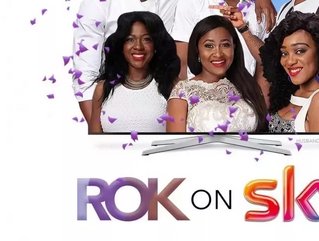 In case you didn’t know, Nollywood is a big deal. In terms of the number of films produced, the Nigerian film industry is the second largest in the world (Bollywood trumps it). In 2014, the Nigerian government estimated that Nollywood was a $3.3 billion industry.

At the helm of the industry, Nigerian innovators work hard to ensure movies are made accessible to the masses. Take Mary Njoku, the CEO of Rok, a new Nollywood Sky channel that launched just yesterday. The channel is produced by Rok Studios (the production arm of iROKO) and aims to serve the huge UK diaspora audience.

We caught up with Njoku before today’s Rok gala celebration in Central London and asked a few questions about the brand new channel.

Can you tell me about your background and how you came to be Rok’s CEO?

I started off as an actress - I’ve been acting really since school. I had worked on a number of TV series and movies over the years, and really learned my craft on set. But I always had an interest in what went on behind the scenes, and I always had a dream of telling Nollywood stories using my own interpretation, which is why I moved into film production and launched Rok Studios.

How was Rok on Sky conceived?

We knew Nollywood was really popular in the UK, and a lot of Rok fans had seen a few of our movies or TV series, but asked when more of them were coming to their TV screens. We looked into what the UK market had, in terms of delivering amazing Nollywood films and TV, especially newer releases, and we felt that there was really a gap in the market. This is how Rok on Sky was conceived.

How are you planning to promote and market the channel?

We are in London with a lot of stars, who are out speaking to the media and being interviewed. We also have a really busy social media team who are promoting Rok on instagram, Facebook and Twitter. We’re also celebrating with a big gala launch as well, in Central London - so we’re coming at it from all angles, to make as many people as possible aware of Rok on Sky.

How is Rok on Sky funded?

We fund ourselves and have support from Iroko - then we will also be working with a number of advertisers on the channel, to generate revenue through that as well.

Why has Nollywood seen a massive increase in popularity?

The production standards keep getting better and better, and I think that when people watch one or two Nollywood movies, they’re hooked. They love the drama and suspense and the amazing stories. The movies are also really character-led, and people really buy into that and get absorbed into strong characters, so I think this has been really a huge part of Nollywood’s increasing popularity.

Where do you see Rok on Sky in five years time?

Oh wow - well, we dream big, so I guess we would love to be moving into other countries around the world. But first and foremost, we want to keep making amazing movies and TV boundaries, pushing the boundaries and making a big contribution to Nollywood.