The travel phone app that can save your life 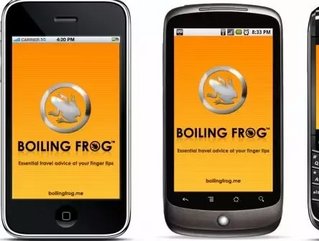 The recent troubles in North Africa have further highlighted the importance of safety when travelling abroad. In days gone by, this would require a trip to the bookstore to buy the latest travel guide to learn about the culture of a country, the things you should expect to encounter and what to do in an emergency.

But with mobile phone technology, there is no need to stand out as a tourist clutching on to your travel bible.

The ‘Boiling Frog’ app was co-founded by Hugh Martin, a former Special Forces officer in the British Army. The app provides practical travel, safety and first aid advice for all travellers but particularly for those travelling to high risk areas.

“It was inspired by travel combined with the understanding of risk and delivering advice from the range of training courses we operate on a medium that everyone has access to, a mobile phone,” Martin said.

“We run many training courses based on travel, safety, security, first aid and driving – and we often make the point about the ‘boiling frog’ syndrome - if a frog is placed in boiling water, it will jump straight out but, if it is placed in cold water which is slowly brought to the boil, the frog won't sense the danger it's in until it's too late.

“In the same way we can often miss the warning signs when things gradually happen around us that could put us at risk.  So the lesson here is to avoid being the boiling frog.”

The app itself has many unique and interactive features to cover all you would need to know when abroad. It gives someone the ability to plan prior to a trip – with advice and packing lists. Once at your destination, keep yourself safe with information on avoiding scams and personal safety tips

Offering advice on the most common ailments travellers suffer abroad such as sunburn, to how to act in a hostage situation, the app is certainly comprehensive. It also has excellent first aid training lessons, with a flow diagram for emergencies backed up with advice for ailments and further information about medicines with embedded videos.

A simple but vital picture dictionary is also included, so you can point and communicate whichever country you find yourself in.

Available on iPhone, Blackberry, Android and Nokia OVI the app is priced at £1.79 – a small cost to pay for something that could help to save your life.

Martin, who said he has more apps in the pipeline, stated that technology can only help the business traveller to stay safer.

“Although smartphones tend to make us dependent on technology and vulnerable when, say, the battery runs out, technology is making the world a smaller place. Smartphones make communication quicker and timelier.”