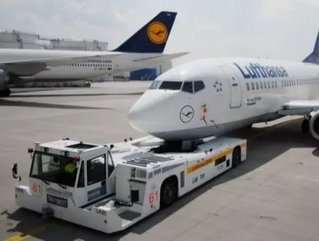 Lufthansa has announced that its new hybrid-power towtruck for taxiing aircraft could win regulatory approval for commercial use within the next two months, bringing with it a potential to save €1.9 million a year in long haul operations at Frankfurt airport.

Europe’s second-largest airline revealed the progress of the TaxiBot project at an industry event, which is part of a wider programme to transform the Frankfurt hub, the third-busiest on the continent.

The new towtruck is the product of several participating companies. Israel Aerospace Industries Ltd., French ground-handling equipment maker TLD Group and the Lufthansa Engineering & Operational Services unit are all involved in the building of the machine.

It is designed to push airliners back from airport gates as normal, but rather than leave the plane to taxi to the runway using its own power, the towtruck takes it to the runway under the guidance of the pilot’s remote control with the jet engines switched off.

This new procedure would result in 85 percent less fuel being used and would also reduce noise by more than half. It is more time efficient, speeding up gate clearance by two minutes. Lufthansa also said that the new routine would reduce risk of jet vortexes sucking in foreign objects which might damage engines.

The €15.7 million upgrade programme at Frankfurt airport involves the running of ground vehicles on alternative energy sources in order to reduce fuel costs, emissions and noise. The new TaxiBot is built with a diesel-electric engine and is awaiting certification.

Watch the video below of tests carried out last summer.