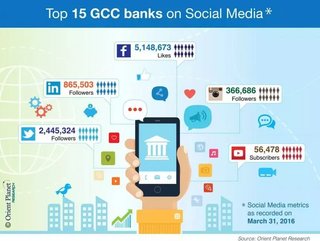 A new report has urged the GCC banking  industry to become more interactive with customers through social media.

The Social Media and its impact on the GCC Banking Sector report was launched by Orient Planet Research (OPR) and recommends that the region’s banking and financial institutions should not ignore the widespread consumer adoption and the potential power of today’s social media. It suggests that GCC banks should look beyond social media as a simple marketing tool but rather see it as an essential factor in the move to develop relevant actionable insights and gain real value from consumer interaction.

As of 31 March 2016, the following figures have been determined;