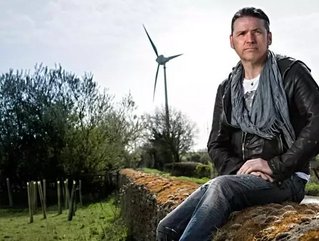 Ecotricity founder Dale Vince says government moves to end financial support for onshore wind represents a glaring double standard when compared to other forms of energy such as nuclear and fracking.

Nuclear power and shale gas fracking will enjoy massive finance assistance and open-door planning treatment despite being unpopular with the public due to their inherent environmental risks. By comparison every survey ever undertaken in the last 20 years has found that between 60 percent-80 percent of the public support building more onshore wind.

There are two issues here. Firstly the Government justifies cutting wind support on the basis of saving money and wanting technologies to stand on their own feet. At the same time it awards a further 35 years of new subsidies to nuclear, and billions to the oil and gas industry to support it against falling energy prices.

The IMF recently reported that Britain spends £30 billion a year subsidising the fossil fuel industry; that is over £1,000 per household. Onshore wind by contrast costs £10 per household. Government sentiments make sense, but they are targeting the wrong subsidised energy source.

Secondly, it is dishonest of the Government to say they are changing the planning system to give local people the final say on wind farms. They are simply putting decisions about exceptionally large wind projects (over 50MW), which currently sit with government, into council hands. In fact these wind farms are so exceptional that only 5 currently exist in England, a further 3 already have permission to be built, and there are none in planning. So the Government have just given a say, but not final one, to local people, in zero new planning applications for onshore wind.  And projects of this size are so rare – it is unlikely there will be any more coming forwards. It is incredible to dress this up as giving new powers to local people – it is a lie.

Putting aside the dishonesty of the announcement, this represents a glaring double standard. Planning regulations stipulate that all energy projects over 50MW are decided at national level – this applies to coal, oil, gas and nuclear – yet only wind will now to be decided by local councils - the most popular and least harmful of all sources of energy. If the Tories are serious about this one nation thing they cited today (they used to call it Localism) then they should apply it evenly across the board - give local people a say on all energy sources. But don’t call it the final say, since it is not.

And then there is fracking, probably the most unpopular of all energy sources; planning regulations and property law have been changed to make it easier, environmental standards have been dropped - even the requirement to tell someone you plan to frack under their house has been removed. There is no local say or veto here. And it has been promised the most generous tax regime in the world. These are double standards plain and simple and they show an incredible bias towards fossil fuels and away from renewables.

This will inevitably face severe criticism from the wind power industry and environmental campaigners. At the same time, however, it is important to recognise that subsidies should only be applied to support the development and growth of early stage technologies until they are able to compete on their own merits. It is therefore important to periodically review their technological and economic maturity, particularly with wind and solar PV installations, as they have been following the traditional cost reduction curves.

Equally, though, the Government has to ensure that all technologies are able to compete fairly and on their own merits, especially given the aim to reduce carbon emissions. The question is whether these subsidies for onshore wind should now be moved to other, less mature and economically fledgling technologies, such as energy efficiency schemes, storage and marine and hydrogen technologies.

Delivering cost efficient, secure and low-carbon energy supply is a difficult balancing act for governments but new energy providers should also not be relying indefinitely on centrally administered support schemes. In the right locations and with the right business models, there is a future for the UK onshore wind sector.