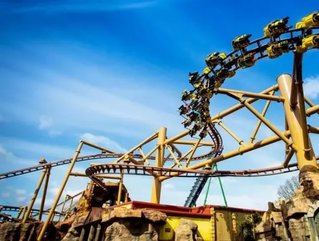 Whether you are looking for a winter break or planning ahead to summer 2017, there are some extremely highly-rated amusement parks right across Europe to satisfy many a leisure traveller.

Reviewing website Trip Advisor has grown into one of the most trusted consumer knowledge sources, helping millions to plan holidays and have their say on where they have stayed. But which theme parks emerge at the top of the pile of reviews? Here is a rundown of the seven that rank highest among visitors.

Situated in central northern Italy, around 15km west of Verona, Gardaland Park offers visitors a range of thrill rides, family attractions and even a fairy-themed hotel. More than three quarters of visitor ratings are either ‘very good’ or ‘excellent’, with 10,739 reviews producing a four star overall rating. Evening tickets are recommended, especially in the summer months.

Home to Peppa Pig World, a massive favourite with young children and parents alike, Paultons Park is based in the New Forest National Park in Hampshire. With 60 rides and attractions in total, the site caters for various interests, from the exclusive Peppa’s Big Balloon Ride to Water Kingdom Splash Park. In terms of reviews, two thirds of visitor ratings are ‘excellent’ with the 4,629 reviews producing a four and a half star average.

Visitors to Spain’s northeast coast may wish to take a trip to PortAventura World. Praised for offering attractions suitable for all ages, The Shambala, Tutuki splash, the Stampida and Khan are rides which have proven particularly popular among the park’s guests. The resort offers more than just family entertainment – fine restaurants, sport, stunning scenery and business facilities are all on offer. Again, evening passes are recommended over daytime tickets to avoid queues and extreme summer heat. A brand new park, Ferrari Land, is opening in April 2017 and is sure to lure many a motoring fan to the resort.

Arguably Europe’s most well-known theme park, Disneyland Paris celebrates the stories and characters which have helped shape the upbringings of generations of book and movie lovers. Its special shows and fireworks displays are unrivalled, with the reviewers’ consensus being that the steep expense is worth it. It is also one of the most reviewed amusement parks, with almost 24,000 visitors providing feedback, generating an average rating of four stars. The park opened in 1992 amid protest, however it is now responsible for bringing millions of tourists to France and is a significant economic contributor.

Opened in the 1970s in Les Epesses, western France, this historical theme park draws in two million visitors a year making it France’s fourth most popular attraction. It is split into five separate show-based attractions lasting around 30-40 minutes each, exploring different periods of history. The main show, The Cinéscénie, tells the story of 700 years of history in the area and is set on a massive outdoor stage behind the ruined castle. Guests can experience the different centuries surrounded by unspoilt countryside and can stay in one of the Puy du Fou's four original hotels. It has been immensely well reviewed on Trip Advisor, averaging four and a half stars and having more than 80 percent ‘excellent’ ratings.

Open from the middle of April to the middle of September, Tivoli Gardens comes to life in the centre of the Danish capital city. Between 20 and 30 rides are on offer along with live entertainment and more than 30 different places to eat. Tivoli has been praised for its appeal to consumers who are not natural amusement park enthusiasts, helping it receive 12,400 reviews at a four and half star average. It is also conveniently located versus other theme parks, which often require transport from the nearest city centre.

Rated as “the benchmark for theme parks”, Europa-Park’s 6,800 reviews average out at five stars. The park is one of the most scenic in the world, set between the Black Forest and Vosges, and houses more than 100 attractions and shows. The park is unique in the sense it has numerous themed areas based on different countries in Europe, from Iceland and Austria to Greece and Russia. There are 13 rollercoasters and 23 hours of shows every day, drawing in more than five million visitors each season. The park has been open since 1975, the themed areas being added throughout the 1980s and 1990s with more being added in recent times. A measure of its success can be found in the park’s hotel occupancy rate which is constantly above 90 percent all year round.