Boosting the signal: How Productiv and Bladon Micro Turbine are bringing connectivity to the world’s most remote areas 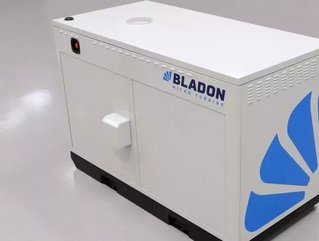 Mobile phones have changed the way in which the world communicates, but their functionality can only be as good as the signal they receive.

The demand for mobile network availability is growing in the world’s more remote and inaccessible regions, creating a major challenge for companies in this sector: how to develop new, robust telecommunications infrastructure that’s reliable, simple to install and inexpensive to maintain.

The development of new mobile networks tends to be expensive. In populated areas, energy and maintenance account for over half of a phone mast operator’s costs. In more remote areas, particularly certain parts of Asia and Africa, access to a consistent source of power is rarely guaranteed, which only pushes the price even higher. This means that companies need alternative sources of power to enable development of remote mobile networks.

The use of a diesel generator, or genset, has been the traditional approach to tackling this issue. While generally reliable, these units must be refuelled regularly – a substantial undertaking if there are multiple masts located many miles apart on poor quality roads. Regular breakdowns can also occur, particularly if an operator is not monitoring a unit regularly via a predictive maintenance system, for example. Other disadvantages of diesel gensets include inefficiency (because they run at a constant speed), noise, pollution and their desirability as a target for thieves.

These issues are causing a shift towards less energy-intensive power sources with lower maintenance requirements, more reliability and added security. Among these technologies is the microturbine genset (MTG), a multi-fuel generator for phone masts that is currently being championed by UK company Bladon Micro Turbine.

Moving on to MTG

In contrast to diesel gensets, MTGs can run off a mixture of different fuel types, such as diesel, kerosene or a combination of the two. This, along with the fact that MTG parts cannot be used in traditional diesel gensets or road vehicles, helps to deter thieves by making it more difficult for the unit to be repurposed elsewhere. Each MTG can also be monitored and controlled remotely in real time with a special controller that is supplied with the product.

Crucially, an MTG requires fewer service visits than a diesel genset, thus significantly reducing maintenance costs for operators. Depending on the location, MTGs can last a month (as opposed to several days) before an on-site service is needed.

Coventry-based Bladon is the world’s first manufacturer of microturbine gensets for the telecoms market. Supported by venture engineering services provider Productiv, Bladon has developed the Bladon MTG, an ultra-low vibration product and the world’s only EURO V Compliant 12kW diesel genset. At <65dB per 1m, it is also the quietest genset on the market.

The company developed its first prototype of the Bladon MTG in 2014 but did not have the in-house resources to optimise its manufacturing design and commercialise the product. As Bladon’s director Philip Lelliott explains, additional help was needed to take the prototype forward:

“We were looking at several possible markets and applications for the prototype, including range extension for electric vehicles. In the end, it was Productiv that worked with us when the telecoms market was identified.”

Bladon soon asked Productiv to get involved in the design, manufacture and commercialisation processes, with speed of the essence in all three cases.

“The Productiv team started by validating the design and recommending adjustments,” Philip says. “We then revised these designs based on their feedback and started looking at suitable opportunities and penetration points in the telecoms market.”

Getting it right first time

As the company agreed the final design and came closer to assembly, Productiv supported Bladon by developing what it calls a ‘guided sequence’. This broke down the assembly of each MTG into 1,000 individual steps, including: powerplant insulation, electrical wiring, fuel and air systems, dump resistors, door locking mechanisms, powerplant mounting, turbine and alternators, cabinet panels, combustors, battery assembly, and final assembly.

Productiv then reviewed each step to ensure that it was optimised, while removing any stages that the team deemed unnecessary, collating the remaining steps into a clear, easy-to-follow guide.

The Productiv team identified several potential issues during this process. Access to the recuperator-end of the powerplant insulation, for example, was restricted, making it difficult to insert fixing bolts. The insulation material’s thickness was also inconsistent, which meant that an engineer had to individually measure each component before cutting the material.

The installation of the dump resistors also risked incorrect orientation and assembly of the system. In these cases, Productiv created clear photographic guides to demonstrate best practice for assembly, as well as an idea of what the components should look like once complete.

“The guided sequence that Productiv created has since become our assembly team’s bible,” Philip says. “We’re now installed at Productiv’s own facility, The Proving Factory, where we plan to manufacture one MTG every 12 minutes.”

Bladon Micro Turbine is now entering volume production for its MTG, which may soon power many of the millions of phone masts available worldwide. The company has also received its first major order from a leading mobile phone tower operator.

“Correct assembly of the MTGs has been vital to ensuring quality control and optimum performance,” Philip says. “The Productiv team’s painstaking efforts to identify and address any possible issues has helped us to create a complete assembly blueprint which we can now take forward into volume production.”