By André Laperrière
May 19, 2020
undefined mins 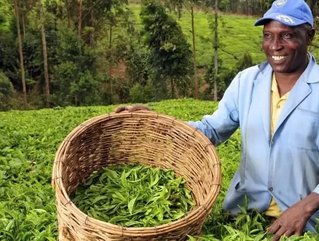 André Laperrière joined the Global Open Data for Agriculture and Nutrition (GODAN) initiative as its first Executive Director, in September 2015. During his career, Mr. Laperrière has led and managed numerous projects on behalf of large Private Corporations and subsequently, within the United Nations and the World Bank.

Today, hunger is bringing suffering to more than 800 million people across the globe. Those affected currently do not have access to enough food to live sustainably. Although a majority of this population is based in the world’s most vulnerable regions, such as Africa, this does not contain the issue within borders as food security issues are also residing in some of the most developed nations. As ongoing conflicts continue to deepen Africa’s hunger crisis, almost 25 million people across the continent are still dangerously food insecure, with a further 6 million people suffering at critical levels. With Africa expecting to see the largest relative increase of its the population over the coming 15 years, the alarmingly low levels of food insecurity across the continent is very much a reality that needs to be addressed.

Climate change, crippling costs, poor weather conditions and disease outbreaks have hit landscapes, farmers and businesses hard over the years and the potential impacts can be tenfold. In Africa, where water conservation issues, malnutrition and hunger are still pertinent, climate and weather are one of the principal causes. For example, the ongoing political conflict around Lake Chad combined with the extreme weather conditions are forcing 40 million people to fight a daily battle of survival. The irregularity of rainfall, and rising temperatures has spurred the ongoing conflict, causing famine across the region bordering Nigeria, Niger, Cameroon and Chad resulting from the lack of resource to farm crops and livestock. The agricultural industry is a volatile one.. Africa continues to experience the struggle to meet the growing demands of the population, to combat the fluctuation in food supply, the instability of markets and the lack of investment and resource in the agriculture industry across the continent.

The farming industries across Africa continue to suffer due to the lack of shared information and data, most small-scale isolated farmers in rural African communities are missing out on new and improved methods and best practices of farming and agricultural processes. This issue, married with the water contamination crisis affecting sub-Saharan Africa - where only 16% of the population have access to clean water and have no access to critical information relating to water quality or weather data - demonstrates how there is the significant need for access to Open Data to help bring about accessible information and help end the crisis, save lives and create a more sustainable future.

Open Data advocacy has developed alongside technological advancements throughout the years. However, its potential impact on the agricultural space has rarely been considered a key solution to solving the food crisis. The potential for the use of Open Data to combat food issues can and should no longer be ignored; not only because of the relevant historical data and the potential to increase production it can provide, but its usefulness in monitoring water supplies, anticipating changes in the weather and also sharing crucial information across borders so that nations can learn best practices from each other and prosper. Through the use of satellite data, remote sensing and mapping, farmers, businesses and consumers in the agricultural industry can harness the most relevant and useful information to improve and adapt practices, make better decisions and ensure sustainability. Increasing access will trigger innovations that will bring both agriculture and nutrition to the next, higher level of impact, improving efficiency, yields, competitiveness and ultimately increasing food security not only in Africa but across the world.

Initiatives like the Ghana-based organisation, Esoko, present a prime example of the benefits of Open-Data access to the industry by illustrating how mobile phone technology can be integral to allowing farmers and their buyers to access Open Data to obtain information to improve access to markets and encourage fairer pricing based on shared feedback. By utilising Open Data to collect data on a national scale, the technology solution TradeNet was born, enabling farmers to share and access data through SMS with customers and other farmers. This data is obtained through existing channels such as weather data channels and other basic technology, to enable a self-sustainable business model combining data, farmers, customers, markets/ dealers and phone companies on an open system to benefit the livelihoods of hundreds and thousands of families. Those using the technology can both collect and input data regarding the selling price of basic commodities, such as the prices of seeds and fertilizers and send daily updates to farmers through SMS. Thus, the farmers can determine their input costs, increasing their selling profit by utilizing the information made available to them. Now, more than 350,000 farmers have joined the Esoko platform in 10 countries in Africa and it continues to expand.

Open Data can play a critical role in helping to achieve the Sustainable Development Goals proposed by the United Nations. Open Data can help foster economic growth and job creation, improve efficiency and effectiveness of public services by allowing the cross fertilization and synergy of different industries, sectors and governments leading to new practices, new equipment and new technologies that in turn, lead to better yields and the stimulation of private and public economies. This will in turn, improve government transparency, citizen participation and accountability through the sharing of data across communities and borders.

However, there is still a long way to go before Open Data access is globally accepted and utilised. This drive and determination for it to be a success needs to be welcomed by respective governments and organisations across the globe and pushed to the top of the agenda. With the correct approach and implementation methods in place, Open Data can have a high economic and social return on investment for countries all over the globe and in all stages of development. Areas in Africa, Latin America, Asia and Europe have already demonstrated how increased access to data can help develop economies and farming practices, taking a significant step forward to achieving sustainability and solving the hunger crisis.