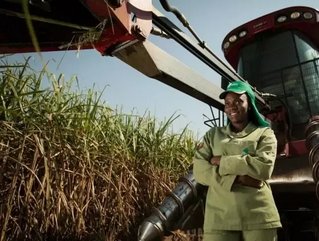 Angola is home to an estimated 35mn hectares of arable land. An economy historically and still reliant on natural resources, agriculture represents an enormous opportunity for sustainable, diverse development.

“Angola’s potential has always been remarkable, however, more than half the food products consumed by the Angolan population are imported,” remarks Mário Lourenço, CEO of Cochan, key financier and 40% stakeholder in Biocom, a massive harvester of sugarcane and producer of electricity and ethanol byproducts.

The recent civil war and resultant mine-clearing operation caused a slowdown in agricultural investment in the country, meaning the sector only contributes just over 10% of Angola’s GDP.  However, Biocom is a project already reversing this trend. Its 80,000-hectare site lies in the heart of the municipality of Cacuso, in the northern Malanje Province. Asides multi-industry investor Cochan, the group is formed of two other Angolan companies. Odebrecht Angola, which operates in the fields of engineering, agribusiness, mining and civil construction, also holds a 40% stake, while state oil firm Sonangol owns the remaining 20% share. So far investment has hit US$750mn, with another US$520mn to be spent on phase two of the project.

“Biocom is more successful than we could have ever imagined and is the first Angolan company after independence to produce and commercialise sugar,” remarks its Deputy General Manager Luís Bagorro Júnior. “In 2016, we were able to save the country US$25mn in sugar imports, which is equivalent to 52,000 tonnes.”

Both Bagorro and Lourenço fully recognise that more production is needed, for Africa remains a sugar deficit region. In 2015, Angola spent US$450mn on sugar, the third largest import of all foodstuffs and second only to wheat flour and rice.

“However, the prospects are optimistic,” Lourenço adds. “Sugar output in the continent is projected to increase by 49% by the end of 2025 as a result of production expansion in Sub-Saharan African countries.”

Cochan and Biocom are no doubt playing a considerable part in achieving this growth. Biocom forecasts production of 62,947 tonnes of sugar in the 2017/18 harvest, and a massive 256,000 tonnes in 2020/21 season, a fivefold increase on last year. These are huge numbers and Biocom has room to maneuver regarding its acreage. At the moment, it only uses half of its 80,000 hectares of land, with around 11,000 to remain dedicated to environmental preservation.

Bagorro adds: “When we commence with phase 2 of the project, we will use the remaining 30,106 hectares of arable land. We continuously use technology to carry out tests in our seedling nursery to validate which variety of sugarcane adapts best to each of the areas of our farm, in order to maximise crop yields.

“The planting and harvesting of sugarcane is already fully mechanised, and the facility is self-sufficient as it generates its own electricity. Our tractors are equipped with autopilot, which assist us in preparing the soil for planting, using modern technology to enable safer and more effective processes. Biocom is innovative as it is constantly analysing and using key learnings to continuously improve the quality of the soil and as a result the crops, and we have just announced a US$ 12mn investment in new equipment to meet the demand of this year’s harvest. Bagorro goes on to detail Biocom’s impressive pedigree regarding agricultural research.

“In May 2017 the Agricultural Laboratory of Biocom was awarded an international certificate of quality by Instituto Agronómico de Campinas (IAC), in Brazil, one of the world's most renowned institutions in the field of agriculture. Biocom's Agricultural Laboratory is equipped with the highest technology and precision equipment. It is able to analyse plant matter (foliar), organic fertiliser, mineral fertiliser and gypsum as well as provide agronomic advisory services, which supplies information on more accurate dosages of minerals and fertilisers to be added to the soil for the various crops to be planted. This is important as better soil quality will ultimately result in better crop quality.”

This clever use of technology and pooling of knowledge has allowed Biocom to harvest a much larger area this season, up from 9,272 hectares to 12,600.

Crucial though the sugar production may be, it is the ethanol and electricity byproducts from the biomass that make the operation unique. In 2016 Biocom produced 58,000Mwh of electricity and 14,000 cubic metres of ethanol. By the 2020/21 season, it expects to produce four times more electricity and more than double the amount of ethanol.

“As Angola’s population increases, so does energy demand,” says Lourenço. “This is why increasing electric power availability is amongst the Angolan government’s highest priorities. It is committed to introducing new renewable energy aiming to increase energy capacity and by 2025 new renewables will constitute 7.5% of all energy produced.

“There is a huge demand for alternative energy solutions and we are happy to contribute to its supply and sustainability. both environmentally and financially. This is one of Cochan’s key priorities.”

Bagorro adds that Biocom has an enormous opportunity to become the go-to company in Angola for processed alcohol.

“Data indicates that the country imports about 80,000 cubic meters of alcohol per year, and we currently supply approximately 10 to 15% of the market demand,” he says. “Biocom produces hydrated ethanol and it is our ambition to start the production of neutral ethanol within the next couple of years.”

Asides the obvious economic focus, the venture is also one of sizable social value, with people at the heart of what the project stands for.  Indeed, one of the greatest challenges for Bagorro is the education of Biocom’s 2,500-plus workforce, which it expects to grow to almost 3,000 by 2020/21. The vast majority (over 90%) are Angolan nationals, who can all benefit from Biocom’s Individual Development Programme, which hones key skills to develop the leadership team both now and in the future, with plans to replace the expatriate workforce over the next few years.

“Responsibility and sustainability are cornerstones of our project and drivers of our strategy,” says Bagorro. “Biocom invests thousands of dollars each month in corporate social responsibility projects and education of the local community is one of the key focus areas.

“We promote a literacy programme for young people and adults which has already benefitted more than 700 people to date. We also support a family agriculture programme called ‘Kukula Ku Moxi’ (which means ‘grow together’), which is improving the lives of more than 700 families.” Biocom also supports sports groups aimed at young people in the community as well as the children of its employees.

Fast forward five to 10 years and Biocom will hope to see the legacy of its educational work in action with the future generation. But what about the business ambitions for the project? Bagorro certainly sets a high bar. “Biocom aims to be amongst the five largest producers of sugar in Southern Africa by 2020/21,” he says.

For Lourenço and Cochan, as with Bagorro, it is all about generating positivity for customers, suppliers, partners and communities. “Biocom shares this vision and its shareholders are totally focused on creating a benchmark project in Africa, where the potential for agriculture is enormous, but still undeveloped. At a national level, we want it to continue its remarkable growth trend.”