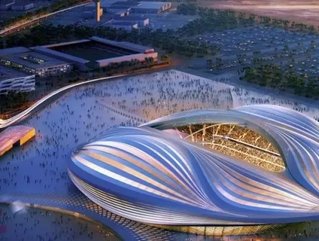 The first stadium construction contract for the 2022 Qatar World Cup is due to be awarded next year.

The organising body, the Supreme Committee for Delivery & Legacy, released a statement saying that the 40,000 capacity Al Wakrah Stadium is in the development and on track to be completed in 2018.

With the World Expo 2020 also coming to the region in the not too distant future, the Middle East is awash with exciting construction projects.

READ MORE: How the World Expo 2020 is already Transforming the UAE Construction Industry

It said that the bowl of Qatar’s newest ground is being dug out by 50 machines and that this structure is now visible on Google Earth. The stadium is located 15 kilometres south of Doha.

The site’s offices have now been filled by 50 staff, including project management specialists KEO and design experts AECOM, with this number expected to quadruple in the next year.

Once completed, the Al Wakrah Stadium will become the home of Al Wakrah Sports Club and after the 2022 World Cup the upper tiers containing 20,000 seats will be taken down and given to nations in the region in need of sporting infrastructure.

It will be one of the most advanced arenas in the world, not least in part to its state-of-the-art cooling system, crucial to meeting the needs of supporters and players, who are not used to the extreme temperatures found in the country.

Qatar’s climate has also raised questions over when the tournament will be held, with many footballing authorities pushing for a winter competition.