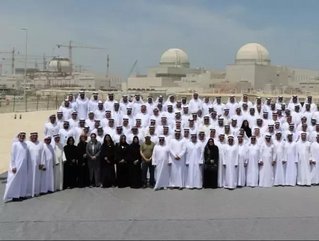 The Emirates Nuclear Energy Corporation (ENEC) and Nawah Energy Company (Nawah) welcomed 117 of the UAE’s overseas diplomats to the Barakah Nuclear Energy Plant during a tour of the project, which included a briefing on the UAE’s Peaceful Nuclear Energy Program and the latest construction and commissioning milestones.

During their visit, the delegation was briefed on the latest developments of the UAE Peaceful Nuclear Energy Program, including construction progress, the next stages of testing and commissioning and plans for operational readiness. The Barakah plant is considered the world’s largest new build nuclear energy construction site, with four reactors being constructed simultaneously.

The Ambassadors stated that this project marks one of the greatest achievements undertaken by the UAE in the field of technology and nuclear energy, which will eventually have a vital and critical role for the long-term stability of the UAE’s energy generation and strengthening the UAE’s position on both regional and international levels.

This visit is part of the 11th Forum of UAE Ambassadors and Heads of Missions Abroad, organized from 9 to 13 April 2017. The visit aimed to introduce the representatives to the most significant achievements of the UAE in vital sectors and fields, such as energy, including the Barakah Nuclear Energy Plant Project.

On the sidelines of the briefing and tour, the Ambassadors and Heads of Missions Abroad met with employees and talented Emirati students enrolled in ENEC and Nawah’s Energy Pioneers program. The visiting delegation expressed its admiration of the students’ dedication and commended ENEC and Nawah’s education and capacity building initiatives.

Mohamed Al Hammadi, ENEC CEO said: “We are honoured to welcome such a large group of our nation’s diplomatic representatives at Barakah and to demonstrate our commitment to delivering this program with quality and safety as our number one priorities.

“Under the guidance of our wise leadership and with the support of the international community, the UAE is paving the way to be at the forefront of clean low-carbon energy with promising projects operated by qualified Emiratis.

“Peaceful nuclear energy will bring many benefits beyond providing the nation with safe, clean and reliable energy. Already more than AED 11 billion worth of contracts have been awarded to 1,400 local companies up to the end of 2016. This highlights the opportunities available to companies who are willing to increase their safety and quality processes to the high international standards mandated by the nuclear energy sector.

“We continue to work closely with the international community, including the International Atomic Energy Agency (IAEA), the International Advisory Board and many other world-renowned industry and advisory bodies to ensure every aspect of the UAE’s Peaceful Nuclear Energy Program is implemented according to the highest standards as the world’s leading new nuclear build site.

“We are proud to be able to show our nation’s representatives abroad the progress that continues to be made as we develop the UAE’s first nuclear energy plant, as an inspirational model for countries interested in exploring nuclear energy for the first time.”

Since its establishment in 2009, ENEC has focused on the safe delivery of the UAE Peaceful Nuclear Energy Program. Construction began in 2012 and Unit 1 is now more than 94 percent complete and all four units are more than 78 percent complete. Once the four reactors are online, the facility will deliver up to a quarter of the UAE’s electricity needs.