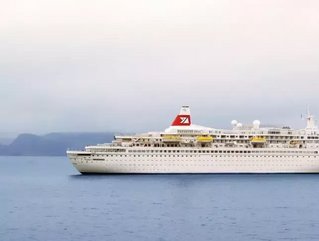 Cruise operator Fred Olsen is eyeing further upgrades to its onboard internet services, according to the group’s IT Director, Damon Impett.

The company recently beefed up its internet speeds across its four ships, with speeds upgraded from 800Kbps to 3Mbps.

The project involved retrofitting the company’s fleet of ships, with around 28km of cabling installed on each vessel.

But in an exclusive interview with Business Review Europe, Impett revealed there are plans to improve the on board offering yet further.

“While the recent upgrade was substantial, we are currently looking to update that to 10Mbps as we know we can offer more, although, as all operators will know, it doesn’t matter how much you increase your speeds by, as customers will always take your offering to the limit,” he commented in an exclusive interview with Business Review Europe.

“That 10Mbps is actually expandable to 20Mbps in cases where there is additional capacity available on the satellites we are using.”

The capability of bouncing from one satellite to another to take advantage of extra capacity is an example of providers becoming more proactive, Impett commented, adding that a number of new satellites are due for launch this year, with more to come in the following few years.

In the wide ranging interview, Impett also touched on the subject of automated ships, saying that they would “absolutely become a reality”, but that ships would likely never be completely unmanned due to concerns over by physical and cyber security.

“I think ultimately there will always be someone on the ship to ensure that a vessel is not allowed to run off course, in the same way that planes are fully automated but you still have a captain and chief officer.

“Nobody really wants to get into a plane and think there is no pilot but they’re actually perfectly capable of flying themselves, and it’s even easier on a ship because of the lower speeds.

“Technically ships are already capable of running autonomously, so this is not a massive step in that sense, it’s more about changing people’s mindsets.”