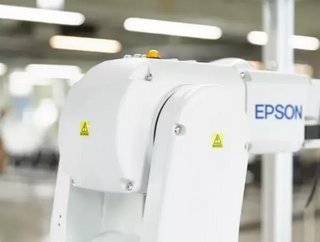 It may come as a surprise to discover that Epson has been making robots for more than 30 years.

The renowned printing specialist has, even by its own admission, marketed this area of expertise far too well. Ask a consumer what Epson makes, chances are they will reply printers.

True, printing and inkjet innovation are still crucial, game changing projects for Epson. However, the company is heavily invested in many technological fields from visual communication and wearables to virtual reality and robotics.

The latter was the focus of attention at a conference held at Epson’s Dusseldorf offices and innovation centre, showcased as a one of the four key pillars of innovation for the company.

Rob Clark, Senior Vice President of Epson Europe and Managing Director of Epson UK, explains: “Essentially this is a step towards making the robot act more like a human. It is able to sense and understand how to pick up and place items into very difficult situations. The robot must apply movement and pressure in order to place objects in the right place, it learns its environment.”

What this allows is for less complex, less accurate robots to become more accurate by learning on the job, greatly assisting manufacturers which may not possess the most advanced automation capabilities. It also enables robots to assemble and move parts made to less precise specifications by getting them to fit into spaces as any human would.

All of this is part of a wider ambition to introduce dual arm robots to the assembly line.

“Imagine moving three bricks with the middle brick held by the force of two either side of it,” says Dirk Folkens, Factory Automation Sales Manager for Epson Deutschland. “You don’t want the middle brick to fall onto the floor, so this is why a dual arm robot needs a force sensor for both arms to work together.

“This is a core development for the dual arm robot, which will bring future technologies into today’s robot. Combine this with 3D printing the components the robots assemble, and automation could play an even bigger part in the whole manufacturing process.”

The potential economic savings this could bring are obvious, with robots taking over from even more repetitive and mundane assembly tasks. However, a trend both Folkens and Clark have noticed is that companies in Europe are becoming increasingly conscious of their ecological output.

Clark says: “Ecology is something we have a strong focus on, a message that resonates particularly strongly in Germany. Companies are looking to the likes of Epson to provide technologies and solutions that are in tune with the environment. Ecological IT is growing all the time, and the priority of eco versus cost is going up. One day cost and ecology will have an equal billing.”

“We have more customers who are taking care of their total cost of ownership, which includes the power consumption of a robot over its lifetime as well as its environmental footprint,” Folkens adds. “Our robots don’t need 380 volts – the power consumption is extremely low across our range of products, not just robots.”

Epson’s main focus in Europe centres on France, the UK and Germany, the latter a particularly strong market due to its enormous automotive sector. “If you compare the UK to the rest of Europe it is actually a little bit behind in terms of robots per 10,000 workers,” Folkens comments. “The country with the highest density is Japan, but Germany is not far off.”

For decades Epson has been an undisputed force in the printing industry, but Clark is keen to emphasise the company’s wider expertise and the unveiling of the force-sensing technology demonstrates its pioneering capacity beyond printing.

“We’ve been number one in the market for projectors for the last 15 years,” he says. “I know there is a perception that we are printing experts – we did far too good a job marketing printing in that respect. We’ve been selling robots for over 30 years and produced the robots in the first place because we needed them to produce watches for the Seiko brand – at the time there weren’t any robots precise enough so we built our own.”

Folkens adds: “In the four-axis SCARA robot space we have a 37 percent market share and are by far the number one producers. We are now in the six-axis robot space and trying to do as much as we can there too.”

Given the robotics market is far more B2B sales-driven than the marketing-driven printing sector, it is easy to see how Epson robots have gone somewhat under the radar with everyday consumers. That said, people have a fascination for robots.

“We put a robot into Media Mart in Dusseldorf to show consumers how it fills ink tanks for our Ecotank printers, and what it certainly did was attract people because everybody loves robots,” Clark explains. “However, did it help sell more Ecotanks? Possibly. Did it sell us any more robots? No it didn’t. We can do the marketing but it’s not what makes the sale.”

Robotics investment is far more sensibly channelled into research and development. A massive $1.3 million is spent by Epson every day on R&D across the four pillars of innovation, allowing it to file 5,000 patents a year.

“They are what allows us to move from one generation onto the next,” Clark says. “I’m sure 10 years ago they didn’t imagine we’d be launching the force sensor today.”