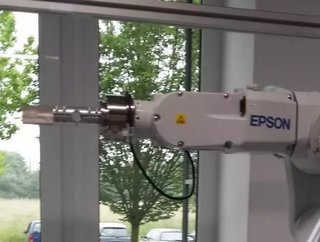 Global printing, projecting and robotics giant Epson has launched a new innovation in robotics that allows a robot to detect and learn the amount of force required to manipulate components during manufacturing assembly.

The force sensing robot range, using the S250 series force sensor components, enables robots to complete even more complex tasks with humans able to concentrate on less mundane manual work. It will also provide a cheaper solution to manufacturers as robots can afford to be built with reduced accuracy traits as it can learn on the job by detecting the force required to fit a particular component into a space.

Although the company is best known for its presence in the printer market, Epson is one of the market leaders in robotics, with sales increasing by more than 50 percent over the past three years.

Minoru Usui, Epson's President since 2008, outlined the company's vision for robotics at the event in Germany, which showcased an impressive of robots and printing technologies.

Business Review Europe also interviewed Rob Clark, UK and Ireland Managing Director and Senior Vice President of Epson Europe, alongside Dirk Folkens of Epson Deutschland - a man with 30 years of experience in robotics. Check our August magazine for the full feature, including images and videos of the robots in action.