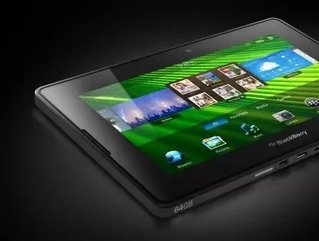 Apple dominates the tablet market by a significant margin and with the recent release of the iPad 2 the caliber of its production is better than ever. Apple tablets have been popular among business executives for a while now, but the market is constantly expanding and the choice of tablets has widened significantly.

Here we take a look at a few of the hottest tablets out there at the moment and consider their benefits for the businessperson.

Confusingly named – for this tablet is suitable for work as well as play – the BlackBerry PlayBook’s outstanding feature is the (almost) perfect partnership between the brand’s phones and this tablet. Helpfully, tethering via Bluetooth enables you to access anything stored on your phone via the tablet’s much larger screen. No more will you sense your blood pressure rising as you attempt to write a long email on your handset’s tiny text box! Not only this, but the tethering connection allows your data to be synchronized on both gadgets.

Better yet, BlackBerry has carefully considered the implications for security as a result of this capability. Tethering can be monitored and controlled by your IT department so that personal information and confidential company data is protected. For example, if your tablet is recycled and given to another user, no worries – the slate is completely wiped clean with all your files and activity logs removed.

However, the PlayBook’s strength is also its downfall. The tablet’s email and calendar are limited without the connection to the BlackBerry phone. Buying this product in isolation, then, might mean you miss out on one of its key pulls.

It still has its other benefits, though. Multi-tasking on this device is seamless, and battery life is an impressive 10 hours, matching the feat of the iPad.

Slightly thinner and lighter than the iPad, the Samsung Galaxy Tab is easy to carry around wherever you are. Like Samsung’s smartphones, their tablet utilises an Android operating system: here, it’s Honeycomb. Apps familiar to Android smartphone users, such as Google Docs, Google Calendar and Google Maps, are all on the Samsung Galaxy Tab.

The smoothness of multitasking on this device should be applauded. ‘MiniApps’ allows pop-ups of favoured apps such as Calendar, PenMemo and TaskManager to sit over your main screen without causing a lag. You can also view a list of every app currently running alongside the amount of memory each one is using, so you can then shut down memory-eating apps and conserve your battery life.

The tablet also benefits from what Samsung terms “full web browsing” – simply put, the Galaxy Tab allows the user to open Flash webpages, whereas the iPad does not. Websites such as BBC and YouTube are therefore completely accessible when you want to catch up with the news or take a break with some television.

This is a tablet that sets itself apart from the rest with its bonus product: a full QWERTY keyboard. If you have never been a fan of touchscreen typing this is the tablet for you. Simply place your tablet in the keyboard’s docking station and tap away. Connecting your tablet to the dock come with the added benefit of doubling your battery life.

Of course, the tablet is also installed with a touchscreen keyboard and ASUS’ vision is that the user switches between the two as appropriate. If you’re making a long train journey and have a long report to type up you can bring your keyboard along too, find a table and get typing the faster way. If you finish the report by the time you reach the taxi and you fancy catching up on your emails quickly you can simply detach the hardware keyboard, place it in your bag and return to tablet-only mode.

The downside of this tablet is that it is missing 3G. However, what it can boast is 16 hours battery life (albeit when connecting to the dock) and a scratch-resistant glass display. If you’re looking for longevity, then, this may be the tablet for you.