High chance of persistent deflation in the UK 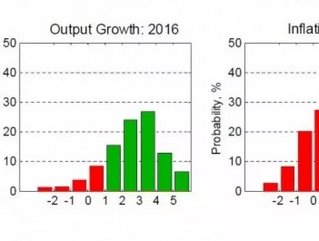 There is close to a one-in-two chance that the UK will experience deflation in 2015 and there remains a near one-in-three chance that this deflation will persist into 2016, according to the Warwick Business School Forecasting System (WBSFS).

The WBSFS is predicting a higher chance of deflation than a quarter ago. These elevated risks of deflation in 2016 contrast the assessment of the Bank of England that inflation will begin to return to its two per cent target during 2016.

However, this low inflation is not expected to slow GDP growth in the UK. The WBSFS predicts that the UK economy is likely to grow around three per cent per annum in both 2015 and 2016. But despite this the forecasts emphasise the uncertainties and indicate a clear downside risk to GDP growth in 2016, with a 15 per cent chance of ‘weak’ growth of less than one per cent, which is well below pre-crisis trend growth rates.

Commenting on the latest Warwick Business School forecasts, timed to coincide with publication of the second estimate of GDP growth from the ONS, Professor James Mitchell, of the Economic Modelling and Forecasting (EMF) Group at WBS, said: “The deflationary risks to the UK economy have risen sharply over the last quarter. There is now close to a one-in-two chance that the UK will experience deflation through 2015 and there is close to a one-in-three chance that this deflation will persist into 2016.

“According to our judgement-free forecasting system, the probability of inflation falling below the Bank of England’s lower target of one per cent has more than doubled from 42 per cent a quarter ago - to the current expectation of 87 per cent.”

“This follows UK inflation recently falling to lows due to weaker oil, food and import prices; and is consistent with continued stagnation and possible deflation in many of the UK’s export markets. Business and policymakers should be increasingly alert to these downside risks; accordingly, we do not expect the Bank of England to change the Bank Rate any time soon.”

Professor Ana Galvao, of the EMF Group at WBS, said: “Our forecasts indicate a higher risk of deflation in 2016 than the Bank of England expects. The WBSFS is not as confident as the Bank of England that inflation will begin to return to its two per cent target in 2016. We estimate that there is close to a two-in-three chance that inflation will be less than one per cent in 2016.”

“These high expectations of deflation are not expected to slow GDP growth in the UK. In this sense, we are predicting that any deflation that the UK might experience will be ‘good’ rather than ‘bad’.