Netherlands and Azerbaijan do business 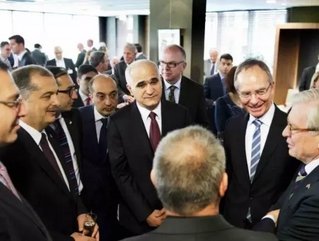 The strength of Dutch–Azerbaijani relations was acknowledged during the inaugural Netherlands–Azerbaijan Business Forum on 23 April at the Maastricht School of Management (MSM), organised by MSM, The Province of Limburg, The European Azerbaijan Society (TEAS), AZPROMO and the Netherlands Council for Trade Promotion (NCH). Around 250 delegates attended the event, including more than 50 Azerbaijani business leaders drawn from all sectors of the country’s economy.

In his keynote speech, Shahin Mustafayev, Azerbaijani Minister of Economy and Industry, commented: “Azerbaijan is working to diversify its economy and the non-oil sector now accounts for 32 per cent of GDP. Royal Dutch Shell is currently involved in the Southern Energy Corridor, which is the largest pipeline project under construction anywhere in the world and is worth $45bn. Altogether, 125 Dutch companies are active in Azerbaijan, and the Netherlands has proven to be a reliable partner to my country. There is plenty of scope for future collaboration.”

Shahmar Movsumov, CEO, State Oil Fund of the Azerbaijani Republic (SOFAZ), explained: “Natural resources can be both a blessing and curse. Azerbaijan is currently passing through its second oil boom. SOFAZ has created around $40bn of revenues, and is a global investor in all asset classes.”

René van der Linden, Dutch Senator; Chairman, MSM; and former President of the Parliamentary Assembly of the Council of Europe (PACE) from 2005–08, continued: “This forum follows a successful trade mission to Baku in April last year. Since regaining its independence almost 25 years ago, Azerbaijan has been transformed into a stable and fast-growing country at the bridging point between Europe and Asia. It offers tremendous opportunities.”

HE Henk Kamp, Dutch Minister of Economic Affairs reflected: “Whilst geographically distant, our countries have much in common. We both have a strong agricultural industry, and the energy industry has had a major impact on both our economies. Azerbaijan is trying to diversify its economy and stimulate rural development. The Netherlands is trying to recover from the financial crisis by investing in industries with great growth potential. These mutual interests are the basis of our ties.”

Twan Beurskens, Vice-Governor of the Province of Limburg in charge of Economic Affairs outlined: “Energy and energy policies were important in Limburg in the past – and this is one aspect we share with Azerbaijan. When I participated in the Netherlands’ Trade Mission to Baku, I was very impressed by the economic progress achieved in Baku, to date. We have discussed the possibility of setting up an Azerbaijan Business Hub in Venlo.”

Rufat Mammadov, Head, Azerbaijan Export and Investment Promotion Foundation (AZPROMO) outlined the opportunities for Dutch investment in the non-oil sector: “There is great mutual interest on developing trade and economic relations. The economy has gown by almost five per cent this year, and was placed in 38th position in the World Bank’s Doing Business report last year. This is partly due to the attempts to diversify the economy over the past decade.”

During a networking lunch, delegates had opportunity to view the Azerbaijan – Sport in Focusexhibition, comprising 65 images submitted by photographers based in 10 countries for a TEAS competition of the same name. This reflects Azerbaijan’s forthcoming hosting of the inaugural Baku2015 European Games from 12–28 June.

The event continued with business-to-business meetings between Azerbaijani and Dutch companies, during which experience was pooled and new, mutually beneficial alliances were created. The forum concluded with dinner at the Province House of the Province of Limburg.