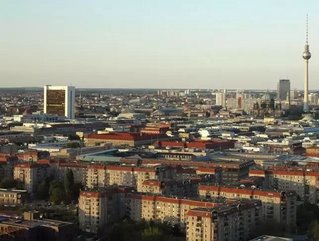 Berlin’s burgeoning tech sector is spurring a new swathe residential development in the city, as international investors realise the income potential inherent in the local market.

Recently rated as the top investment destination for global venture capitalists, Berlin is increasingly popular with technology, media and telecoms (TMT) start up firms, attracted by low commercial rent prices and a conducive business environment. Indeed a recent report by PWC and the Urban Land Institute declared that the German capital offers the most attractive investment and development opportunities in Europe.

Several areas of the city are undergoing large-scale regeneration projects, aimed at courting both domestic and international companies. For example, Media Spree will be an entire new urban city quarter for with an estimated 40,000 new jobs (predominantly in the tech sector) and 8,500 residents.

Areas such as Mitte, Kreuzberg, or Friedrichshain, traditionally considered rough and edgy, are quickly becoming chic, thanks to this influx of affluent workers who want to live in central locations.  Ziegert has been responsible for marketing 900 apartments in these areas and demand is definitely increasing.

Across Berlin, apartment prices have doubled from their modest 2008 levels of 1,500 euros per square meter up to an average of 3,000 euros today. Until recently, Berlin hadn’t been considered particularly appealing for real estate investments. Population growth was sluggish as was the economy – as Berlin’s former mayor Klaus Wowereit frequently used to say, the city was was “poor but sexy”.

Whilst still sexy, Berlin is no longer considered to be poor, with economic growth in the capital outpacing the German national average over the last decade. Even during the global financial crisis, Berlin’s economy managed to grow by around 1% per annum, as the city’s population increased with new residents attracted by improving living standards, good infrastructure and a dynamic cultural and social scene.

Berlin is the largest major city with the lowest property prices in Germany. This is in stark contrast to other major German cities such as Munich, where buyers are unlikely to find a property for less than €5,000 per sqm in the Bavarian city. In Berlin, properties with this price are still considered luxurious.

In Berlin’s current residential market, property priced above €10,000 per square meter whilst still relatively rare is becoming increasingly common.  We have seen an increase in the number of properties in this price bracket of 800% in just five years, with prices continuing to rise.

The increasing demand for luxury residences, and focus on high quality design, is also inspiring an influx of internationally renowned architects. Berlin will host the annual World Architecture Festival in November and ahead of the event Daniel Libeskind’s first residential building in the city, Sapphire, will complete. With more than 95% of units sold, the development has been particularly popular with overseas buyers, which is an increasing trend across the city.

American and Chinese buyers, together with Israelis and Italians are well represented in the city, where the portion of international buyers in central Berlin continues to grow – by up to 50% in 2015.

At the same time, Berlin is profiting from uncertainty in other European markets. The UK’s recent decision to leave the EU, has affected investment interest in London and other cities, as the fall in the value of the pound has been somewhat offset by nervousness around long returns.

Berlin will therefore continue to be an attractive investment destination, and there’s currently no strong reasons the acceleration in prices should slow down in the coming years.  Brexit could even have a long-term positive impact on the Berlin housing market, because economic and political focus in Europe could likely shift even further towards the German capital.