Can Pinterest tap into the Africa&#039;s booming social media market? 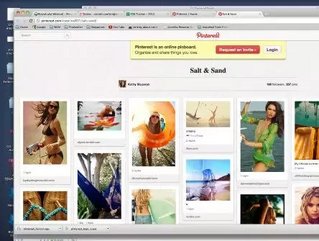 The visual site that emulates a pin board, Pinterest, has been steadily gaining traffic since its beta opening in March 2010. Now the third largest Social Media network in the US, African Business Review looks into the rise of this visual social media, and if it is likely to hit it off on the continent.

While Pinterest’s unique users are declining in the US, they are steadily rising in South Africa, where it is now the 20thmost visited website. Hailed by some as the future for businesses and marketing, hear are the advantages to Pinterest.

Predominantly image based, the low text input required for each pin allows Pinterest to transcend language and cultural differences more effectively than other social media formats. If the success of other more text heavy formats, such a Twitter and Facebook are anything to go by, Pinterest should enjoy rapid and widespread uptake due to its scope for universal appeal.

The ability to integrate Pinterest with other pre-existing social media platforms like Facebook takes advantage of a captive audience. A social media revolution has been underway for some time, and Pinterest is able to capitalise on this. Muti-platform media will allow for deeper market penetration, connecting the continent like never before.

Some social media experts aren’t so sure that Pinterest will hit it off across the whole continent, citing a number of potential drawbacks that will limit the success of this pictorial social media.

As a social network which is mainly image-based, Pinterest requires more bandwidth than Facebook and Twitter to operate. Large images take some time to load on slow connections, so areas with less bandwidth for 3G or Wi-Fi will not be able to load the site.

Pinterest is not a particularly mobile-friendly site. Part of the appeal of Pinterest is viewing on a large monitor, and mobiles only allow you to view a single photo at a time. Mobile communication makes up a huge percentage of social media activity worldwide, least not in Africa. With connectivity on the move so fundamental to social media, mobile compatibility is vital. In addition to this, Pinterest’s iPhone app doesn’t allow you to pin your own content, simply re-pin others’, slightly defeating the object of self expression.

While the limited use of text may create an all inclusive environment on Pinterest, there are in turn limited benefits with regards to information sharing. With a lower character limit than Twitter, it is difficult to share information when pictures alone will not suffice. Limiting THE ‘usefulness’ of Pinterest as an outlet for news and communication.

This all boils down to a question on the very nature of social media. Is it, as the name suggests, a device for social interaction, where individuals develop online identities and interact on a social level? Or is it a space for the dissemination of important information, a frontline news service stretching to the far flung reaches of earth and society. Well, the answer is both, in varying measures depending on who you ask, and that is its beauty. For this reason, Pinterest will see meteoric success, not in isolation, but as another string to the social media bow.