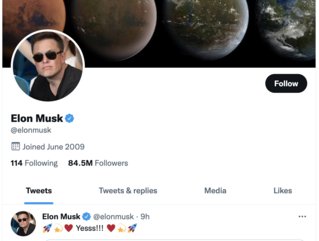 As billionaire entrepreneur Elon Musk buys Twitter for US$44bn, we draw up a timeline, from the buying of shares to the critical tweets and unsolicited bid

Tesla magnate and the world’s richest man, Elon Musk, is the new owner of Twitter Inc following an agreement by the influential social networking service to sell the company to Musk for US$44bn.

The deal was done following several days of negotiations between Musk’s team and the 11 Twitter board members where the two sides discussed details including a timeline to close any potential deal and any fees that would be paid if an agreement were signed and then fell apart.

This comes 11 days after the billionaire unveiled his financial bid for the social media company and follows months of tweets from the Tesla founder criticising Twitter for its failure to act as a free speech platform.

Musk, who has 83 million followers on Twitter and is a prolific tweeter, regularly using the platform to share updates from the companies he owns as well as memes, believes that Twitter needs to be taken private to grow and become a genuine platform for free speech.

In a TED speech on April 15, the day after offering to buy Twitter for US$43bn, the 50-year-old entrepreneur who featured as TIME’s Person of the Year in 2021, explained his motivation for the bid, saying that he believes it’s really “important that people have the reality and the perception that they’re able to speak freely”, within the bounds of the law.

“I think it’s very important that there will be an inclusive arena for free speech,” he said. He denied that the move was about making money or maximising his ownership of Twitter.

Beginning January 2022, we outline the timeline of Musk’s hostile takeover of Twitter – from his buying up of shares and critical tweets of the platform, to his refusal to join the Twitter board and final unsolicited bid. 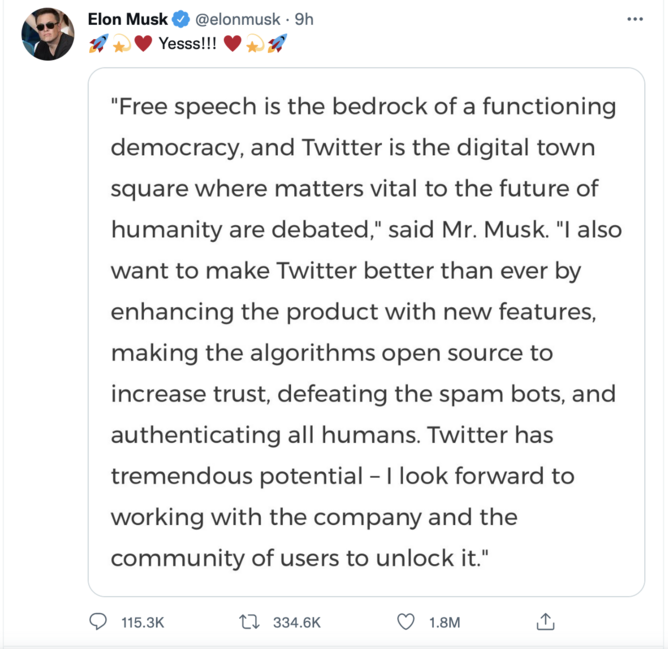 The world’s richest man, Elon Musk, starts buying Twitter shares almost daily and by March 14, has ownership of 73,486,938 shares in the social media platform, according to the Securities and Exchange Commission (SEC).

In a federal court filing in New York City, SEC called Musk’s objections to its subpoena invalid refusing to let the billionaire escape a 2018 agreement that requires his Twitter use to be overseen. In 2018, the SEC and Musk sparred over an infamous tweet in which the Tesla and SpaceX owner said he was considering taking Tesla private at US$420 per share, and was subsequently sued. “So long as Musk and Tesla use Musk’s Twitter account to disclose information to investors, the SEC may legitimately investigate matters relating to Tesla’s disclosure controls and procedures,” the SEC said.

Having recently openly criticised Twitter in a series of tweets over its practices concerning free speech, Musk tweeted a Twitter poll to his followers – “Free speech is essential to a functioning democracy. Do you believe Twitter rigorously adheres to this principle?” More than 2 million responded to the poll with 70.4% of users responding ‘no’.

Musk reveals he now has a 9.2% in Twitter, making him the largest shareholder in the social media giant, with more than four times the 2.25% holding of Twitter co-founder Jack Dorsey, who stepped down from the CEO role in November 2021. This sees the Twitter share price rocket from around US$39-a-share to US$48.93-a-share.

Following his revelation, the Twitter board offers Musk a seat on the board of directors, as long as he does not own more than 14.9%, as the company believed it was “the best path forward” with board members having to “act in the best interest of the company and all our shareholders”. Musk accepts this offer.

This was the day that Musk was expected to join the Twitter board having previously accepted the offer, but he now rejects a seat on the board. This is revealed the following day, April 10, when Twitter CEO Parag Agrawal announces in a statement Musk’s refusal to join the board, tweeting “Elon shared that same morning that he will no longer be joining the board”. Addressing Musk’s decision to decline, Agrawal said: “I believe this is for the best. We have and will always value input from our shareholders whether they are on our board or not.”

A lawsuit is filed in New York City against Musk by investor and Twitter shareholder Marc Bain Rasella over “failing to report his Twitter share purchases to the SEC” in time. According to the lawsuit, the billionaire had until March 24 to disclose his holdings to the SEC, however the delay caused a drop in Twitter’s stock price, allowing Musk to purchase more shares at a lower price. Musk is accused of missing a regulatory deadline by failing to disclose that he had amassed a stake of at least 5% in the company, and instead didn’t disclose his Twitter stake until it had nearly doubled to more than 9%.

Musk begins his hostile takeover bid, making an unsolicited bid to buy Twitter for US$43bn (US$54.20 per share) and take it private via a financing package comprised of equity and debt. However, this is rejected by Twitter bosses as Musk did not offer information on how exactly he would buy the network. Twitter stocks plummet following this bid. The Tesla owner also tweets a poll asking his followers to vote ‘yes’ or ‘no’ as to whether taking Twitter private at US$54.20 should be up to shareholders, not the board. Over the next 10 days, he continues to interact with his followers over the potential Twitter bid.

Musk takes to the TED stage, together with TED head Chris Anderson, to explain why he wants to own Twitter, saying how he thinks it’s “very important that there will be an inclusive arena for free speech”. He then outlines a few moves he thinks Twitter should make for that to happen, including open-sourcing its algorithm, and making apparent any actions that emphasise or de-emphasise people’s tweets, “so there’s no behind the scenes manipulation either algorithmically or manually”.

The Twitter board files its plans for a ‘poison pill’ defence with the SEC, a move that would head off a potential tender offer from Musk or other parties. A common way to fend off a potential hostile takeover by diluting the stake of the entity eyeing the takeover, Twitter’s defence outlines that should any shareholder purchase more than 14.9% of the company by April 25, the board will offer existing shareholders special rights.

Musk outlines a detailed financing plan for his bid, announcing he had secured financing with the help of Morgan Stanley, with half his stakes in Tesla offered as collateral. He committed US$21bn in equity, US$13bn from Morgan Stanley in debt facilities and another US$12.5bn from the bank and others in margin loans. With this, he began to win over shareholders.

Musk meets privately with actively-managed funds which hold shares in Twitter, in a bid to convince them to take up his offer.

Musk’s team and Twitter meet to discuss the prospective US$43bn sale of the social media platform and hammer out the final stages of US$54.20 per share takeover bid. The talks last into April 25 morning as they hammer out the terms including a timeline and fees if an agreement was signed and then fell apart, according to Musk representatives.

Following the emergence of rumours that Elon Musk could seize Twitter, shares of the company soar by 5% in premarket trading to US$51.50 a share. Several hours later and the Twitter board announces it has reached a deal with Musk to sell the company to him for around US$44bn. Musk will pay US$54.20 cash per share for the San Francisco-based company, which will now be taken private. Following the announcement, a number of Musk critics quit the platform, among them The Good Place actor Jameela Jamil, who said: “I fear this free speech bid is going to help this hell platform reach its final form of totally lawless hate”.