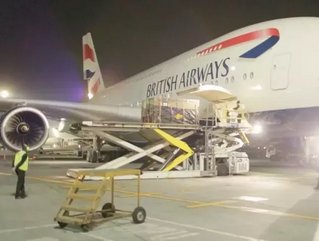 IAG Cargo welcomed six special VIPs on British Airways’ first A380 flight to Miami yesterday. The six white rhinos made their journey from Johannesburg to Miami as part of a conservation programme to ensure the continued genetic diversity of the species.

Gabriella Tamasi, Product Manager for Live Animals at IAG Cargo, said: “With these rhinos weighing one metric tonne each, they take up a lot of space, so we need an aircraft that can handle them. Importantly, the A380 allows us to control the hold temperature to within one degree of accuracy – which is really important as rhinos give off a lot of body heat and we need to keep the temperature as comfortable as possible for these magnificent creatures."

On-board the A380s, specialists from IAG Cargo alongside veterinary teams were throughout the voyage to ensure a comfortable, safe, and relaxed flight. They were transported via IAG Cargo’s Live Animals product, which specialises in the movement of animals of all types: everything from dogs and cats to lions and rhinos.

Watch the video of their epic journey here.

Rhinos in Africa face a range of threats including poaching and an encroachment on their space by humans. White rhinos have become a conservation success story. Numbers in the wild dropped to as low as 50 in the early 1900s, but this subspecies of rhino has now increased in number to more than 20,000, becoming the most populous of all the rhino species.