Jacob Zuma signs up to join the Twitter army 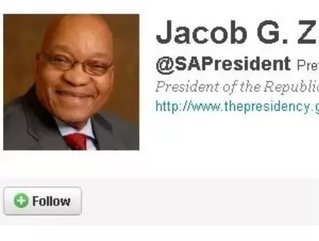 The power of social media sites has long been talked about. The ease and speed at which a message can be spread means it is a platform unrivalled by print and even broadcast media. Micro-blogging site Twitter in particular has become a forum to share breaking news.

During the uprisings in Tunisia, Egypt and Libya Twitter became a hotbed for alerts on the latest incidents and goings on during the protests. It was a place for communities to unite and communicate at the touch of a button.

But can it help connect politicians and the voting public? South African President Jacob Zuma is hoping so. Zuma became the latest leader of a country to set up a Twitter account last month and in doing so has left himself exposed to the wrath, and sometimes praise, of his people.

Zuma’s Twitter debut on 10 May provided a timely reminder about his African National Congress (ANC) party as people were deciding whose box to mark on municipal election day on 18 May.

Within hours of Zuma’s account going live, people had tweeted him about a range of issues, from simple messages of support to loaded questions about problems in their community.

While Zuma, or more accurately an official from his office no doubt typing the messages, may not be a Twitter addict - he’s only sent eight tweets in his first eight days – does even a small presence on a social networking site enable a worthwhile channel of communication?

Presidential spokesperson, Zizi Kodwa, commented that Zuma “decided to join the world of Twitter to better communicate his activities and reach a wider audience both young and old, domestic and abroad.”

While this communication may be one way (the President is yet to respond directly to any of the tweets directed at him), it does promote political awareness to a generation of South Africans taking full advantage of the internet boom.

Zuma also follows in the footsteps of former South African President Nelson Mandela, who joined Twitter last month. So what are you waiting for? Get following…