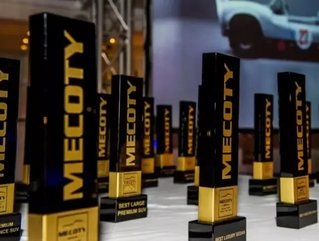 Europe’s carmakers underlined their worldwide appeal after receiving numerous accolades at the Middle East Car of the Year Awards (MECOTY).

The Mercedes S-Class won overall Car of the Year along with Best Luxury Sedan, while BMW, Audi and Rolls Royce also won prizes at the ceremony at Meydan Beach Club in Dubai.

Commenting on the S-Class winning the 'Car of the Year' and 'Best Luxury Sedan' awards, Mike Belk, CEO of Daimler Middle East and Levant said: "To receive two awards at the Middle East Car of the Year awards is indeed an honour for Mercedes-Benz and recognises our leadership position in the luxury automotive segment. Since its inception, the S-Class has always set the benchmark in the luxury segment and the new S-Class continues this tradition."

On receiving an award focusing on the future of motoring, BMW’s Johannes Seibert, Managing Director for Middle East, said: "It is a great honor to have been recognized at this year's MECOTY awards. The Future of Motoring Award is especially significant for us, as BMW Group is strongly investing in future models and innovative technologies. In June 2014 we launched a new brand, BMW i, in the Middle East Region, which stands for innovative mobility.

"The BMW i8 with its unique hybrid technology and new materials as carbon fiber is truly a car of the future. We thank the MECOTY judges for honouring BMW i and the BMW i8."

All nominees underwent a stringent selection process from a select panel of judges, who were handpicked to represent their respective countries. Looking to add more value and encourage interaction from a regional audience, MECOTY empowered consumers by letting them vote for their favorite car through a custom Facebook app as well, which resulted in close to 11,300 independent consumers voting for their favourite automobiles.

The accompanying car exhibition of the awards, which ran during the weekend, also saw a positive response from the local automotive community with thousands of visitors.

Winners named during the event include: