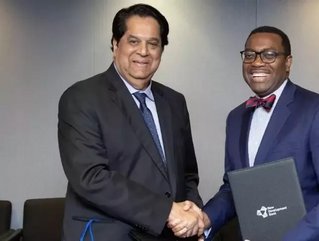 Business Chief takes a closer look at the AfDB and the NDB who have begun collaborations to co-fiance impactful projects in countries of mutual interest.

Established in 1964, African Development Bank (AfDB) is an institute dedicated to developing the African economy and social progress within the region.

Over the last four months, AfDB has been investing in multiple countries including: Egypt, Somalia, Zimbabwe, Eastern and Southern Africa, Ghana, Benin, Malawi and Sudan.

In addition AfDB has invested in African SMEs and Africa’s renewable electricity projects.

Who is Akinwumi Ayodeji Adesina?

Elected in May 2015, Akinwumi Ayodeji Adesina is the eighth president of AfDB. Adesina has 25 years of development economist and agricultural development knowledge.

Prior to his role of president, Adesina served as Nigeria’s Minister of Agricultural and Rural Development, Vice President of Policy and Partnerships at the Alliance for a Green Revolution in Africa and Associate Director of Food Security at the Rockefeller FOundation in New York.

Established in 2014, the New Development Bank (NDB) is a joint initiative between the leaders of Brazil, Russia, India, China and South Africa (BRICS). NDB’s main focus is to mobilise resources for infrastructure and sustainable development projects in BRICS.

The bank’s key objectives include:

Elected in 2015, K. V. Kamath in NDB’s first and current president. Kamath is one of india’s most accomplished and acknowledge business leaders. Starting his career in 1971 Kamath worked at India’s largest private sector bank ICICI where he eventually beaome MD and CEO in 1996.

Kamath graduated as a Mechanical Engineer and completed a post graduate in business administration from the Indian Institute of Management, Ahmedabad.

Did you know? AfDB received a CIPS Procurement Excellence Programme Award in September 2019.