Forrester: Trust must be a priority for businesses in 2023 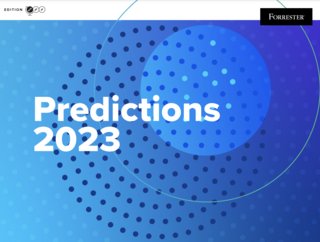 Trust is expected to be top of the agenda for businesses as they head into 2023, according to Forrester’s predictions for the year ahead.

While trust has always been an essential part of any business transaction, it is an issue that has become increasingly important for consumers and employees since the onset of the pandemic.

New research from Salesforce reveals that trust is becoming more important than ever before, with 74% of consumer saying communicating transparently is more important now than before the pandemic, and 68% saying they trust companies that act with society’s best interests in mind – a 9% increase from 2020.

And yet customer and employee distrust are on the rise. Gallup’s State of the Global Workplace report shows that 74% of employees worldwide believe corruption is widespread among businesses in their country, while a 2021 Gallup Panel survey found that just 23% of US employees strongly agree that they trust the leadership of their organisation.

While for consumers, nearly 40% of US consumers say they will stop doing business with a brand following a damaging headline.

And mistrust is expected to rise further in 2023 against a backdrop of economic instability, geopolitical uncertainty, company scandals, and climate change – all of which is undermining trust in organisations.

According to Forrester, trust in consumer technology companies will decline by 15% in 2023. While, during the pandemic, tech firms reached an unprecedented level of popularity, that honeymoon is now coming to an end.

In May 2022, the software stock market recorded a dramatic decline in value – Meta reported its first-ever revenue drop and this has continued into the third quarter.

But the reduction in consumer trust will reach far beyond the consumer tech category, according to Forrester.

For the first time in several years, consumer trust in banks is also falling, with many consumers believing their bank lacks empathy and isn’t following through on lessons learned from the pandemic.

“Reduced trust carries a negative impact for the entire value chain, so organisations that partner with consumer tech firms will benefit from prioritising third-party risk assessments and management,” says Forrester.

Consumer mistrust is also expected to rise around corporate climate change. Greenwashing is becoming an increasingly serious risk. In 2021, the EU found that half of green claims lacked evidence and in the past 18 months, firms like BNY Mellon, Eni, Keurig and Walmart were fined between US$1.5m and US$5.6m.

Forrester says that greenwashing scrutiny from distrustful consumers and empowered watchdogs willing to enforce consumer law – like the UK’s CMA and the FTC in the US – will significantly increase, forcing regulators to step in and crack down on organisations that misinform consumers.

They believe that at least 10 companies will incur US$5 million or more in greenwashing fines in 2023.

With work from anywhere largely in force, organisations are increasingly using artificial intelligence to track employee WFH productivity – a rising practice that is leading to increasing distrust among employees and could push workers to leave their employment or bring legal action.

Forrester argues that firms that earn greater trust with consumers and employees drive loyalty behaviours such as retention and advocacy, helping to ensure resiliency and sustainable growth.