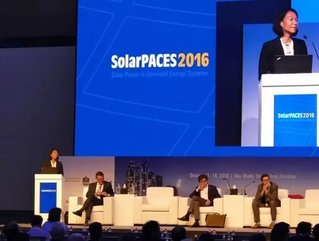 Dr. Chiaki Treynor, Vice President of Technology at GlassPoint, recently spoke at the SolarPACES conference in Abu Dhabi about how the oil and gas industries are making use of renewable energy.

GlassPoint’s innovations include enclosed trough technology, which is being deployed at gigawatt scale on an oilfield in the Oman desert and a first-of-its-kind solar thermal solution that brings the solar collectors indoors to reduce costs and overcome operating challenges.=

“GlassPoint’s innovation was to bring the solar collectors inside a commercial greenhouse, the kind used by the agricultural industry. The greenhouse structure isolates the mirrors and other solar components from the elements, which leads to significant cost and performance advantages,” explained Dr. Treynor.

She added: “By eliminating the wind load, GlassPoint is able to use ultra-light weight, thin reflectors, which are suspended from the roof of the greenhouse. Compared to older solar thermal designs with exposed reflectors, we use a fraction of the raw materials throughout the entire system. This has a cascading effect on cost—from reduced shipping costs, installation costs, to using smaller, off-the-shelf motors and drive systems used to track the sun. Since our reflectors are low-cost, we pack them much closer together to achieve the highest ground efficiency of any solar thermal system. This is particularly important for steam generation on oilfields, where siting is limited by active wells, roads and transmission lines.”

GlassPoint’s enclosed trough technology uses concentrated sunlight to produce steam used in oil production. Its technology has been deployed on oilfields in California and the Middle East, where its demonstrated consistent operational uptime even through severe sand storms. Automated washing units clean the roof of the greenhouse each night, removing layers of sand and dust that can reduce efficiency.

GlassPoint is currently building one of the world’s largest solar plants of any kind with Petroleum Development Oman (PDO), the country’s largest oil and gas producer. Miraah, which means mirror in Arabic, is a 1,021 MW thermal project bridging the renewable and traditional energy industries. Once complete, it will produce 6,000 tons of steam daily, delivering a significant portion of the steam requirements at PDO’s Amal field.

“Miraah will be 100 times larger than the pilot facility that’s been operating successfully in Oman for over three years,” Dr. Treynor added. “Construction of Miraah is progressing faster than the plan and is currently under budget. The project consists of 36 greenhouse blocks, built in a continuous sequence. We are on track to deliver first steam from the first four greenhouses before the end of 2017.”