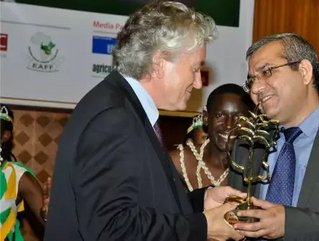 Sanjay Sethi, the Chief Executive Officer for Food and Beverages of the Export Trading Group has been awarded the Africa food Prize 2013 for this noteworthy contribution in helping produce more food for Africa’s poor people.

The Africa Food Prize is a special award designed to identify and recognise achievements by the different key players in the region’s agribusiness and food security contributions.

Sethi has implemented various end to end supply chain integration projects for food and agriculture Africa as well as in India.

He brought up small holder farming communities in many developing economies in Africa and supported them with modern technologies including drip irrigation.

His actions have immensely improved the agricultural infrastructure, irrigation technologies, adoption of new technology and Good Agricultural Practices followed by farmers and he has been lauded as thoughtful and creative Agribusiness Professional who has helped many Governments to fine tune their blueprints for agriculture.

Looking at the world’s increasing population, the agriculture sector has the daunting task of producing almost 50 percent more by 2030 and doubling the production by 2050. Africa has an important role to play here.

Africa is ideally placed to navigate the shifting poles of power by becoming a food supplier to the world. It is the only place which has the potential to assure global food security.

Agricultural potential of these Sub Saharan countries remains untapped, with 60 percent of world’s arable fellow land being in Africa.

By opening up virgin farmland and improving African yields through better techniques, the continent could not only meet its own needs but also be a net exporter of agricultural produce.

Experts say African agribusiness could be worth $1 trillion by 2030. The opportunities are endless: from exporting fresh produce to overseas markets, to canning fruit to provide year-round supplies and exporting processed food to nearby regions.

But the present situation is quite opposite, with food imports by African countries crossing a whopping $30 billion. A large number of poor in Africa continue to die because of starvation and malnutrition.

Sethi’s role in providing leadership to thousands of agribusiness professionals in and outside Africa and showing them the most viable path has multiplied his efforts in ensuring there is more food for the poor.

He was given his award earlier this week at the East Africa Agribusiness Conference and Awards ceremony held at Kampala Serena Hotel during the Gala Dinner organised with much fanfare by Focus on East Africa.