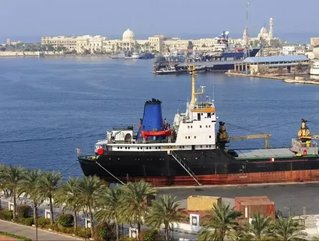 Worth more than $463bn in 2017, Africa’s export industry is one of the biggest in the world. We look at the top 10 exporting countries, and the goods that support their economies.

With two ports, the 3,900 sq km Tema Harbour and the Takoradi Harbour (the main export port of the country), Ghana’s exported goods represent 40.3% of total Ghanaian economic output. The country’s biggest export is gems and precious metals. Ghana is Africa’s largest gold producer. Total gems and precious metal exports had a value of $3.5bn and represented 34.4% of total exports. Closely behind this is mineral fuels including oil, accounting for $2.6bn representing 25.4% of total exports. The third largest export is cocoa, at $2.5bn which represented 24.4% of all exports in 2017.

Tunisia boasts 16 ports in total, notably the Port of Tunis, Sfax, La Skhirra and Didon Terminal. Tunisia’s biggest export is electrical machinery and equipment, accounting for $4bn and 28.4% of total exports. The closest behind this is clothing and accessories (excluding knit or crochet), with $2.2bn in exports representing 15.5% of all goods. The third biggest export, is knit or crochet clothing and accessories at $893.3mn, representing 6.4% of all exports.

With a seaport dating back to the sixth century BC, and a capital city dubbed ‘Bride of the Sea’, the export industry is key to Libya’s economy. Its highest export is mineral fuel including oil. At $17.2bn, it accounts for 96.8% of the country’s entire exported goods. This is followed by iron and steel exports, with a significantly lower $151.6mn (0.9%) and copper at $87.7mn (0.5%).

Morocco is home to five ports: the Port of Al Hoceima, Casablanca, Essaouira, Safi and Tangier. The largest, and most famous, is the Port of Casablanca. Casablanca’s port handles more than 21mn tonnes of traffic annually. Its greatest export is electrical machinery and equipment, which had a 2017 export value of $4.2bn and accounted for 16.5% of total exports. At $3.4bn, and accounting for 13.3% of total exports is vehicles. The third largest export are fertilisers, with $2.6bn at 10.1%.

A country boasting seven ports in total, the true jewel of the Nile for Egypt is the Port of Alexandria. Sitting on the West Verge of the Nile Delta between the Mediterranean Sea and Mariut Lake, it is considered the main port of Egypt’s entire foreign trade. Mineral fuels, including oil, hold the largest share of exports with $5.1bn making up 19.5% of total exports. The second biggest sector is gems and precious metals at $2.1bn, accounting for 8.2% of all exports. The third largest volume of exported goods is electrical machinery and equipment, with $1.7bn making up 6.7% of all goods.

Angola has four ports, with its main port being Luanda. Luanda handles more than 70% of the country’s entire import/exports. Luanda is the capital and largest city in Angola, and the country's most populous and important city, primary port and major industrial, cultural and urban centre. Its largest export sectors include mineral fuels and oil ($32.3bn representing 95.6% of total exports), gems and precious metals at $1.2bn (3.5%) and machinery including computers at $46.4mn (3.5%).

Algeria has 12 ports, with the port of Algiers being the first ever commercial port in the country. The country’s highest volume of exported goods is made up of mineral fuels including oil, with a value of $33.8bn accounting for 96.1% of all exported goods. The second largest export sector by some margin is inorganic chemicals at $382.9mn, representing just 1.1% of all exports. The third largest at $327mn, accounting for 0.9%, are fertilisers.

There are two major ports of Guinea, Conakry and Port Kamsar. Port Conakry is the larger of the two, with a full container storage capacity of around 8,000 twenty-foot equivalent unit (teus) and a maximum annual capacity of around 600,000 teus. The country is a leading exporter of bauxite and holds the mineral’s largest reserve in the world. Guinea’s bauxite/aluminum ore ($990m) and gold exports ($1.54bn) represents around 85% of all exports from the country. The company also exports, Petroleum Gas ($154M), Non-fillet Frozen Fish ($43.2M) and Crude Petroleum ($41.9M).

South Africa is situated on one of the busiest international sea routes and the South African Government has identified the country’s ports and terminals as key economic drivers of growth. It has eight ports, with the port of Durban representing the largest and busiest shipping terminal in sub-Saharan Africa. In 2017, South Africa’s largest exported goods sector was gems and precious metals, with a total value of $14.9bn accounting for 16.7% of total exports. The republic’s other exports are significantly higher than in other African countries, with the 10th largest export sector (beverages, spirits and vinegar) still coming in at $1.4bn. The second largest export sector was ores, slag and ash at $11.3bn, accounting for 12.6% of all exported goods. The third largest export sector was mineral fuels including oil at $10.6bn, representing 11.8% of all exported goods.