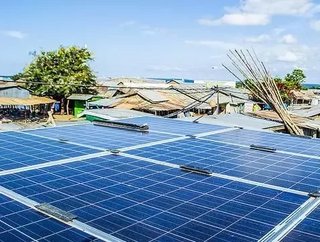 Africa is very much in the firing line when it comes to climate change so the recently adopted Paris Agreement – where developed and developing countries alike are required to limit their carbon emissions to keep the global temperature increase to below two degrees celsius – is positive news, although the devil is still in the detail.

The continent’s vast untapped potential when it comes to renewable energy is a hugely significant resource that could bring clean power cost-effectively to many of the estimated 585 million people that the International Energy Agency (IEA) believes are currently living without access to electricity in sub-Saharan Africa.  Energy access improves living standards, especially for women, and also creates income opportunities boosting economic growth.

Even though the national grid is expanding in many countries within Africa, many people are still ‘beyond the grid’ and so not in reach or can’t afford to connect.  Off-grid solutions are therefore crucial in meeting people’s energy needs, particularly electricity.  One of the major off-grid options from renewable resources is through solar. There’s an enormous potential market because of the amount of money that people spend on fuels like kerosene – which is dirty, smoky and dangerous - for light and heat.  In 2014, according to the IEA, the off-grid population in sub-Saharan Africa spent $14 billion on lighting alone.  In addition, over the last 10 years we have seen a remarkable drop in the cost of renewable energy technologies. Solar photo voltaic (PV) is a sixth of the cost of what it was in 2007, battery costs have more than halved and huge improvements in energy efficiency technologies, such as LED bulbs, are allowing that power to go much further.

In recent years, East Africa has emerged as a hotbed of creative solutions to meeting people’s energy needs where the nexus between clean energy and mobile-based technology is helping to transform whole communities, including in very rural areas.

In Kenya, where around 80 percent of the population lacks access to electricity, 2015 Ashden Award winner SteamaCo is using software and hardware developments to bring the benefits of clean energy to off-grid customers through solar powered micro-grids. They use a cloud-based remote metering and payments system which monitors energy use, lets the users pay for power using their mobile phones, and quickly troubleshoots any problems. The micro-grids work like mini power stations for each village, supplying enough energy to run small businesses, as well as power TVs, radios and bright lights in the home.

Consumer credit to help customers purchase energy products is critical too, especially for those living in rural areas.  Off Grid Electric (a company based in Tanzania) uses mobile money to sell solar power as a daily service to off grid homes at an affordable price through its consumer brand Zola. Their pay-as-you-go service is tailored to user needs, with flexible payments, opportunity to change service level, and excellent support from a customer care team and local agents, as well as a sophisticated app-based customer registration and product tracking system.

In addition to households, the small and medium sized clean energy enterprises that are bringing huge social and economic benefits to off-grid communities in East Africa need to be able to access the appropriate finance to enable them to scale up and reach many more millions. Investment in the sector has grown significantly in recent years, but lack of finance is still a major constraint. Commercial banks and investors still see solar businesses as risky but interesting models are beginning to emerge.

Tanzanian-based SunFunder – who won the 2016 Ashden Award for Innovative Finance - fill the gap of debt-financing for off-grid solar companies, by bringing together investors and a carefully selected portfolio of solar businesses. So far the company has invested $13.8 million in Africa and Asia and is being supported by Ashden to grow their work on the back of them closing a $21m deal for their ‘Beyond the Grid Solar Fund’ which will see them expand to new regions including Asia and Central/South America.

Kenya and Tanzania have been big players in the solar market in Africa up until now because of the combination of an emerging supportive policy environment, political will, growth of private sector, and innovation around mobile money services.  Rwanda is also currently somewhere to watch because the government’s energy policy is displaying joined up thinking about which parts of the country are or can be grid-connected and which are beyond the grid.  There is no reason that off-grid and grid energy have to compete.  In many countries demand for electricity is outstripping supply so there is scope for a variety of solutions – what’s crucial is that those solutions are as sustainable and low carbon as can be.

Kavita Rai is the International Programmes Manager for Ashden. Ashden is a registered charity that champions and supports leaders in sustainable energy to accelerate the transition to a low-carbon world.