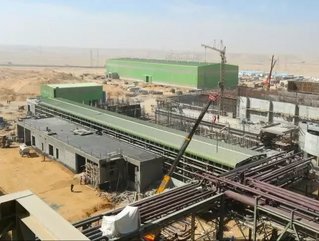 Egyptian Steel came into being at a tempestuous time in the country’s history but since its foundation has proven that success can be possible even under the most impossible conditions, with the right offering to the market and no small measure of determination.

On its journey to an Initial Public Offering (IPO) Egyptian Steel expects to become a major play in its national market through the construction of two steel megaprojects which have been supported over the past two years with over $1 billion of investment.

CEO Ahmed Abou Hashima said: “It was a calculated risk, but my faith in Egypt, its people and that we always come up stronger than before made me sure that this [the revolution, ed.] was only a temporary phase. Fortunately I was right. ”

Each of Egyptian Steel’s new facilities will produce almost 850,000 tons annually, which will eventually give the company a 20 percent share of the country’s steel market; no small feat for a company that has been on the scene for less than a decade.

Its massive operational scale sits well solid Corporate Social Responsibility (CSR) and Talent Development initiatives, which have all contributed to the company being awarded with ‘Rising Star’ status at the Platt’s Global Metals Awards earlier this year.