IBM has an eye to the universe in major scientific project 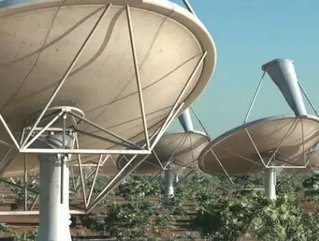 An ambitious new project has been launched aimed at developing advanced technologies for handling the massive amount of data that will be produced by the world’s largest and most sensitive radio telescope to be located in Southern Africa and Australia.

IBM has joined in a four-year collaboration with Square Kilometer Array (SKA) South Africa, a business unit of the country’s National Research Foundation and ASTRON, the Netherlands Institute for Radio Astronomy.

Together they will research extremely fast, but low-power exascale computer systems aimed to develop the technologies for what is one of the most ambitious, international science projects ever undertaken to help us better understand the history of the universe.

The project constitutes the ultimate Big Data challenge, and scientists must produce major advances in computing to deal with it.

The impact of those advances will be felt far beyond the SKA project—helping to usher in a new era of computing, which IBM calls the era of cognitive systems.

When the SKA is completed, it will collect Big Data from deep space containing information dating back to the Big Bang more than 13 billion years ago.

The aperture arrays and dishes of the SKA will produce 10 times the global internet traffic, but the power to process all of this data as it is collected far exceeds the capabilities of the current state-of-the-art technology.

As part of the global effort to solve this unprecedented challenge, last year, ASTRON and IBM launched a public-private partnership called DOME, to develop a fundamental IT roadmap for the SKA.

The collaboration includes a user platform where organisations from around the world can jointly investigate emerging technologies in high-performance, energy-efficient computing, nanophotonics, and data streaming.

Through its SKA South Africa unit, the National Research Foundation is now a user platform partner in DOME.

Simon Ratcliffe, Technical Coordinator, DOME-South Africa: “The DOME collaboration brings together a dream team of scientists and engineers in an exciting partnership of public and private institutions.

“This project lays the foundation to help the scientific community solve other data challenges such as climate change, genetic information and personal medical data.”

Scientists from all three organizations will collaborate remotely and at the newly established ASTRON & IBM Center for Exascale Technology in Drenthe, the Netherlands.

“Ultimately, these cognitive technologies will help to transform entire industries, including healthcare and finance. For example, we are designing a system for storing information that learns from its interactions with the data and parcels it out in real time to the storage medium that’s most appropriate for each bit, which can also be applied to medical images.”

The initial five-year DOME collaboration is realized with financial support of the Dutch Ministry of Economic Affairs, Agriculture and Innovation (EL&I) and from the Province of Drenthe.